The club stalwarts: Brisbane and Melbourne

This is the fourth article in a series naming each club’s best team of loyal stalwarts. Not necessarily just one-club players, but those who turned out for the club over a long period and helped build its success and culture.

Today, the interstate heavyweights Brisbane and Melbourne, two one-city clubs who have won many premierships between them, and if you believe the talk, are stacked with future immortals.

Brisbane
Brisbane joined the big time in 1988, and have won five premierships plus the Super League’s only premiership in 1997.

1. Darren Lockyer – 355 games. A one-club Broncos legend and holder of the all-time games record for the club. Brilliant fullback and an even better five-eighth, and a prolific point scorer. Winner of four premierships, including one as captain. 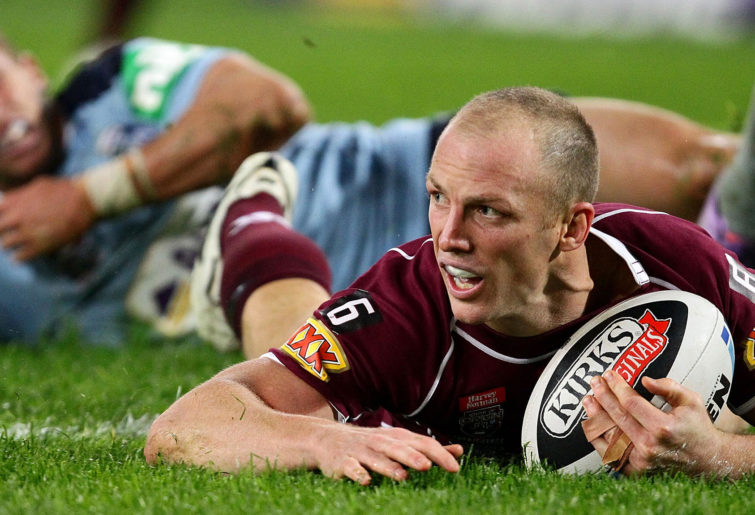 2. Michael Hancock – 274 games. Winner of five premierships and a prolific try scorer, Hancock was one of the hardest players in the game to tackle.

3. Steve Renouf – 183 games. A silky smooth performer who was through a gap before the defence had time to react. He won four premierships with the Broncos.

6. Kevin Walters – 237 games. A mainstay of the Brisbane backline throughout the 1990’s, bleeds maroon and gold blood, and won five premierships with the Broncos, the last as captain.

7. Alan Langer – 258 games. A mercurial and diminutive half back, and the best in the game from the late 80’s to the late 90’s. The Broncos favourite son who captained them to four premierships.

8. Shane Webcke – 254 games. A one-club man who was the best in the business during his 12 year career, picking up four titles with the Broncos.

9. Kerrod Walters – 181 games. A tough little hooker and two time premiership winner who had to compete with his older brother Steve for representative honours.

10. Petero Civoniceva – 235 games. There’s been no better front rower in the NRL era than Petro, a giant of a man and the foundation stone of their forward pack.

11. Gorden Tallis – 160 games. A devastating performer who took every available opportunity to dominate the opposition, and won three titles with the Broncos. 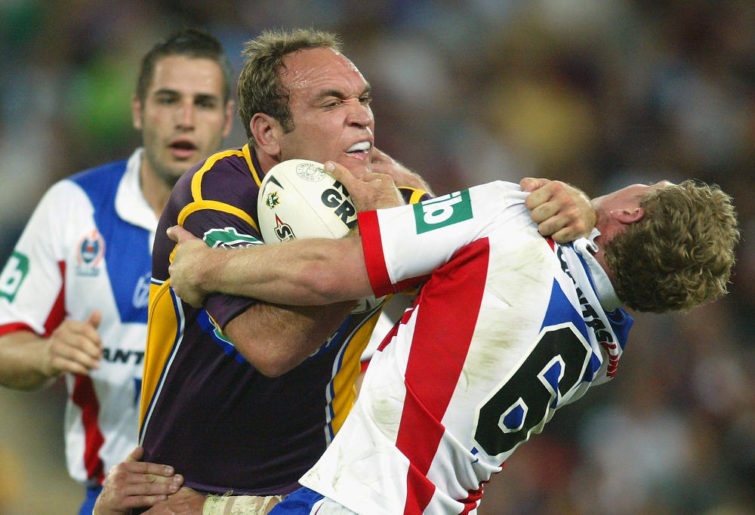 Gorden Tallis: one of the most powerful men to play in the NRL. (Photo by Jonathan Wood/Getty Images)

12. Brad Thorn – 200 games. Four time premiership winner with the Broncos and a towering performer who was destructive both in attack and defence.

13. Corey Parker – 347 games. One of the Broncos favourite sons and a one club player. Parker was a prolific point scorer as well as being a top shelf forward.

14. Shaun Berrigan – 186 games. Two time premiership winner and one of the most versatile players in the game during his time with the Broncos.

15. Andrew Gee – 255 games. four time premiership winner, Gee was a formidable presence on the football field and revelled in the tough stuff.

16. Matt Gillett – 202 games. Classy backrower and one club man who was the complete package until his career was cut short by injury.

17. Sam Thaiday – 304 games. One time premiership winner and one club man who was big, mobile and relentless on the field.

Melbourne
Melbourne joined the fray ten years after Brisbane in 1998, and have won four premierships. 215 players have turned out for the club in that time including one who played over 400 games, two over 300 games or more, four who played 200 + games, and 32 with a hundred or more.

Their team of stalwarts has been selected from players with 140 or more games for the club.

1. Billy Slater – 319 games. A one-club Melbourne man, and probably the best fullback of the NRL era who revolutionised the role of the fullback. 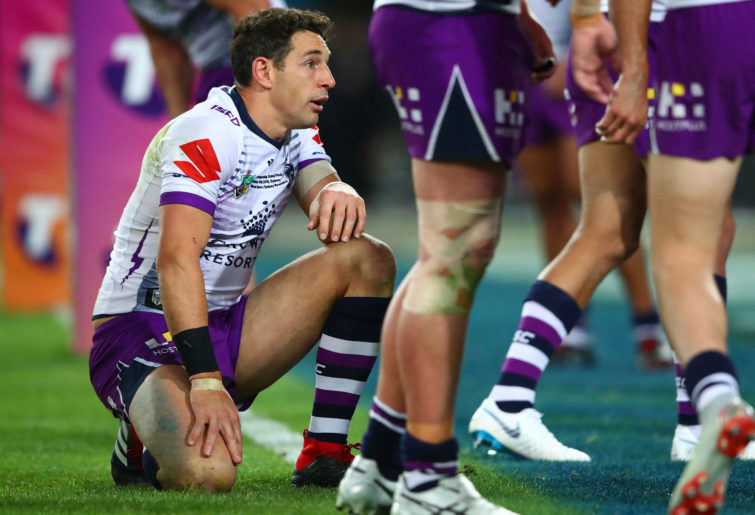 Billy Slater of the Storm. (Photo by Cameron Spencer/Getty Images)

2. Matt Geyer – 262 games. Not the biggest or fastest winger to play the game but certainly one of the best who scored 113 tries for the Storm.

3. Cameron Munster – 149 games, and counting. A tough competitor who has natural talent to burn and is a threat to the opposition for the whole 80 minutes.

4. Will Chambers – 215 games. Big and tough, Chambers treats every game as a personal battle and loves to dominate his opposition.

5. Marcus Bai – 144 games. An explosive ball runner and crowd favourite who was a member of Melbourne’s inaugural team and an important part of their first premiership win.

6. Scott Hill – 177 games. A very clever ball player who could also play lock, Hill never won a premiership with the Storm, but has the distinction of being their first ever try scorer.

7. Cooper Cronk – 323 games. A Melbourne legend, Cronk was one of the best half backs of the NRL era and won two premierships with the Storm.

8. Jesse Bromwich – 270 games, and counting. Outstanding front rower and club captain who has played his entire 12 year career with Melbourne picking up three premierships along the way. 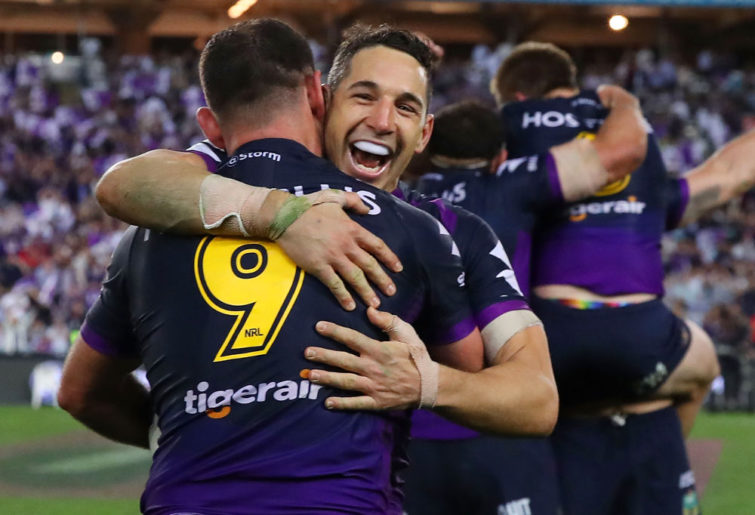 10. Robbie Kearns – 169 games. A classic old-style front rower and member of the Storm’s inaugural side who revelled in the hard going and never took a backward step.

11. Ryan Hoffman – 265 games. Classy second rower who combined punishing defence, great ball skills and a strong running game to be probably the greatest ever Storm forward other than Cameron Smith.

12. Kenny Bromwich – 190 games, and counting. A skilful backrower who, like his brother, has spent his entire career with Melbourne, and has won two premierships.

13. Dale Finucane – 150 games, and counting. Tough and dependable back rower who leads on the field by example, and a two time premiership winner with Melbourne.

14. Ryan Hinchcliffe – 177 games. A versatile hooker and back rower who won two premierships with the Storm.

15. Dallas Johnson – 157 games. A seemingly tireless player who was one of the most ruthless defenders in the business.

16. Kevin Proctor – 179 games. Rangy backrower who has the power and skill to dominate the opposition.

17. Danny Williams – 146 games. A talented, rough and tumble utility forward who would have played more games for the Storm if not for receiving an 18-week suspension.

A very useful Storm team, to say the least, and with one of the best spines of all time.

So who would win in a match up of these two teams of stalwarts? Despite the quality of the Melbourne spine I just can’t see them matching it with the Broncos’ flawless forward pack, and the Brisbane backs lead by Langer would be impossible to contain once the forwards took control.