You think you know pain? We are Wallabies supporters, doomed to live in hell forever

I tell you that, unless you know what it is to have been a Wallabies supporter for the first two decades of the twentieth century, you know NOTHING.

To be a fan of the Wallabies in this era is to know how Prometheus felt, being chained to a rock and having an eagle peck his liver out every day. Except that it’s actually worse, because at least Prometheus didn’t have to deal with new coaches showing up every few days to promise him that under their stewardship his liver would definitely beat the eagle this time.

That’s the thing about supporting the Wallabies: in one way it is the absolute apotheosis of John Cleese’s observation that “I can handle the despair…it’s the hope that kills me”. For truly, hope does arrive on a regular basis for the Australian rugby team.

Hope in the shape of impressive early-season wins – perhaps even a gutsy victory over a touring team after having a player unjustly sent from the field?.

Hope, on some occasions, in the shape of surprising late-season wins: a dead-rubber triumph over the Great Enemy can really get you thinking positively about the future.

For the All Blacks are to hope as a furnace is to an ice cube; as a Sherman tank is to a crippled duckling; as a professional NRL team is to the Wests Tigers. They don’t merely extinguish hope: they strangle it, slice it into tiny pieces, set the pieces on fire, throw them on a compost heap and fire the compost heap into the sun.

If we lived in an earlier age we would keep our children well-behaved by telling them that if they mucked up, the All Blacks would come in the middle of the night and play rugby against them.

But the most bizarre thing about the hope that New Zealand destroys year after year is that it exists at all. For while hope springs eternal in the Wallaby fan’s breast, it also somehow exists alongside the certain knowledge that victory is impossible.

How is this so? How can we of this unhappy breed simultaneously know that misery is inevitable while also letting ourselves believe that relief is possible?

Well, that’s why following the Wallabies is so uniquely horrific: we have mastered the art of holding two mutually exclusive beliefs at the same time, both of which make us deeply sad.

Because we know. Of course we know. We know there is no light at the end of this tunnel.

If the definition of insanity is doing the same thing and expecting a different result, everyone involved in Australian rugby should’ve been sectioned years ago: in this case, the “different result” being winning the Bledisloe Cup” and the “same thing” being playing rugby union against New Zealand. 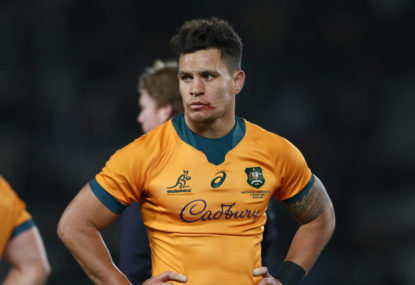 Yet still we watch, and still we follow, and still we – in some pathetic, shrivelled, masochistic corner of our withered souls – believe that better things are possible. No matter how many times we see the Wallaby forwards driven backwards with ease by their brutish black-clad counterparts, we believe.

No matter how many times we switness New Zealanders stroll through gold-jumper defence, brushing off tacklers as an elephant might brush off the full-frontal assault of a mongoose, we believe.

Because we are Wallaby fans, and as such we are diseased in a very specific and very distressing way.

I chuckle darkly when I think back to the 1990s, when Australia and New Zealand faced each other as equals and quite often the Wallabies emerged victorious.

With the benefit of hindsight I can see that the 1990s was some vengeful god’s way of ensuring his punishment for Australian rugby would be especially painful, by creating the illusion that better things are possible. My memory assures me that once upon a time I was happy: my rational brain tells me not to fall for such tricks.

And the thing is, we can’t even rely on the All Blacks getting bored with the constant victory and letting us win. For New Zealanders, beating Australia is like having sex with Angela Lansbury: you can do it every day till the end of time, but it’ll never ever get boring.

Evidence suggests that as time goes on, in fact, New Zealand just keeps finding their Bledisloe dominance funnier and funnier.

Every now and then, the All Blacks will even play a prank on the Wallabies by playing dead in one game, leading to a rash of articles in the Australian media about how the tide has turned and the era has ended and finally the long national nightmare is over.

And then in the deciding match the All Blacks will play better than ever, smearing the Wallabies across the field like so much weak flavourless mustard, and laugh all through the summer at the funny little Australians who actually thought they’d IMPROVED, bless them.

It’s a lot like a pool-hall hustler, who’ll lose a game against a young rube to make him think he’s got the wood over the other, but after lulling the youngster into a false sense of security, the hustler beats him to death and parades his head around on the end of his cue.

For the lesson of the last twenty years is simple: Australia never improves. Likewise, New Zealand never declines. No coach is capable of putting together a winning Wallaby side. No player is capable of lifting the standard of the team sufficiently to overcome the All Blacks.

No matter who Australia picks, they will drop the ball, fall off tackles, kick the ball aimlessly and by the end of the series suffer an almost total collapse of their basic motor skills. No matter who New Zealand picks, they will trample the Australians in front of them into the ground and barely raise a sweat doing it.

And on the sidelines, we Wallaby fans will keep watching them, every now and then turning to each other to say, “You know, if we can clean up our breakdown work and cut down on the handling errors, we could challenge next year.”

But inside we’ll know it’s not true. Inside we’ll know that there will be no challenge next year, for we are Australian rugby union supporters, who long ago committed some unforgivable sin, and so we are doomed to live in Hell, forever.