Fernandez, who turns 19 today, backed up her momentous win over Naomi Osaka by again coming from a set and break down to send 2016 champion Angelique Kerber packing from the US Open, and progress to the quarter-finals of a major for the first time.

Kerber went into their match-up, which was delayed by a men’s marathon match on Louis Armstrong Stadium, as the strong favourite, and it appeared she had one foot in the final eight when she led by a set and 4-2 in the second.

However, Fernandez would demonstrate the fighting qualities that saw her escape defeat against Osaka in the previous round, breaking in the seventh game and then dominating the tiebreak to level the match at a set apiece.

An early break in the final set saw her take a 3-2 lead, and despite facing two break points as she was serving for the match in the eighth game, hit a winner on match point to claim her second consecutive major scalp at the US Open.

Awaiting Fernandez in the quarter-finals is newly-married fifth seed Elina Svitolina, who dismissed Simona Halep in straight sets to enter the quarter-finals for the second consecutive time (after missing 2020 due to COVID-19 concerns).

Three more wins could see the Canadian emulate the efforts of her countrywoman, Bianca Andreescu, who won the title as a 19-year-old back in 2019 when she upset the legendary Serena Williams in the final.

This, however, is Fernandez’s second US Open appearance after she lost to Sofia Kenin, then the reigning Australian Open champion, in the second round last year.

Second seed and new title favourite Aryna Sabalenka managed to avoid the upset bug that claimed the US Open campaigns of Naomi Osaka and Ashleigh Barty, defeating Elise Mertens in straight sets to advance to her first quarter-final in the Big Apple.

There, she will face either Barbora Krejcikova or Garbine Muguruza, who were still to contest their fourth round clash on Arthur Ashe Stadium.

Meantime, fresh off his stunning five-set win against Greek third seed Stefanos Tsitsipas, young Spaniard Carlos Alcaraz had to fight his way out of trouble to reach the quarter-finals of a major for the first time. 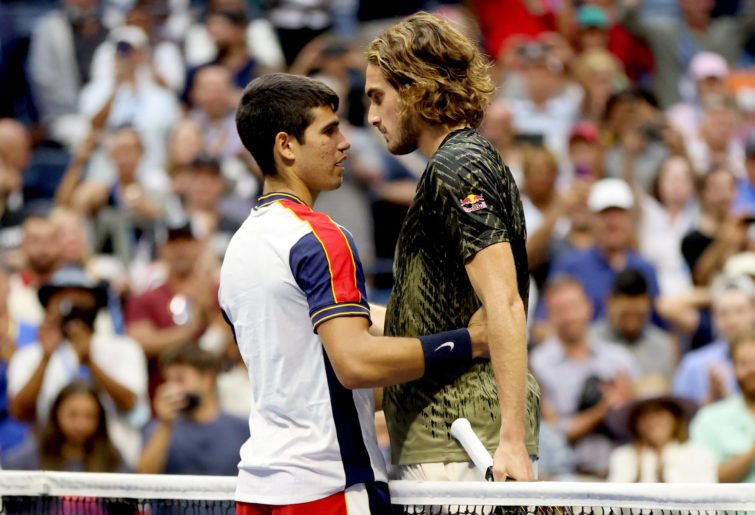 Carlos Alcaraz of Spain defeated Stefanos Tsitsipas during the third round of the US Open. (Photo by Matthew Stockman/Getty Images)

The 18-year-old trailed German qualifier Peter Gojowczyk by two sets to one, and went down a break early in the fourth, but rattled off eleven of the final twelve games, including winning the final set 6-0, to advance to the last eight on his US Open debut.

He will continue to fly the flag for Spain in the absence of Rafael Nadal, whose injury woes means he won’t hit another ball in anger for the rest of the year; it is also no certainty he may ever return to Flushing Meadows, where he has saluted four times.

The prodigy of Juan Carlos Ferrero, who lost to Andy Roddick in the 2003 final, next faces Canadian twelfth seed Felix Auger-Aliassime in the quarter-finals, after he came from a set down to end Frances Tiafoe’s campaign with a four-set victory.

Should he go all the way, then he would beat Nadal’s record of becoming the youngest Spaniard to ever win a major title; Nadal having just turned 19 when he won his first French Open title all the way back in 2005.

Tiafoe’s defeat leaves only two American men left in the singles draw, with Reilly Opelka and Jenson Brooksby to face Lloyd Harris and Novak Djokovic in their respective fourth-round clashes this morning (AEST).

The only American remaining in the women’s draw, Shelby Rogers, will look to back up her momentous come-from-behind victory over Ash Barty when she faces British qualifier Emma Raducanu in a transatlantic clash on Arthur Ashe Stadium.

2019 champion Bianca Andreescu will also look to return to the quarter-finals for the first time since winning the title two years ago, when she faces Petra Kvitova’s conqueror, Maria Sakkari, in the late match on Centre Court.

The quarter-finals then begin on Wednesday morning (AEST).

For the full Day 8 schedule, please check the US Open website.