'Pure instinct': Cheslin Kolbe's incredible rise from firefights in the street to most expensive transfer in rugby

In a sport where size and strength have become ever more important, it’s refreshing that Cheslin Kolbe would be at or near the top of any list of the current best players in world rugby.

The Springboks winger has become one of the most respected and feared players in the game, and his story is a fascinating one.

Kolbe is on an incredible run of form. In the past 24 months he has won a Rugby Championship, World Cup, European Cup and Top 14 title and most recently been a crucial part of the Springboks’ win over the British and Irish Lions.

On top of that he just became the most expensive rugby player in history with a $2.8 million move from Toulouse to Toulon and a $1.6 million per year salary.

Kolbe’s childhood in Kraaifontein (just outside Cape Town) showed little promise of such glitz and glamour.

He grew up in an area where violence was far too common, and once had to sprint away from a firefight between two rival gangs.

But the aggressive environment gave Kolbe some formative experiences.

His smaller size (he’s 1.71m tall and weighs in at just 80kg) meant that he was always a target for critics who were quick to predict he would never go far, unless he had one almighty growth spurt.

Yet that frame never stopped him from competing and battles against bigger opponents taught him some valuable lessons and impacted his whole mentality.

“It made me into a player who wanted to succeed each and every time I took the field,” Kolbe told the Guardian recently.

“I’d get smashed, stepped and handed off but that’s what I did every single week. I think that definitely helped me in terms of developing.”

Kolbe made it into the Western Province system and from there into the Stormers first team.

While he obviously had pace, many felt that his size would see him more likely to succeed at scrum-half and in Sevens rather than the full 15 man game. The critics were half right: Kolbe won a bronze medal at the 2016 Rio Olympics, but has since shown his value in the 15 a side game.

It wasn’t until his 2017 move to Toulouse in the Top 14 French league that Kolbe felt as if he could really just be himself and play his own game. There was less of a spotlight on him and the whole style of play was much better suited to his skills.

“Everyone knows about French flair … they just want to play with the ball and give it some air,” Kolbe said.

“That’s exactly what I love and what I strive for on the field. The players and the staff have backed me all the way. They gave me the freedom to play what is in front of me.”

In this new environment, Kolbe started to create quite a name for himself in French and European rugby.

In his 82 games for Toulouse he scored 172 points and his abilities went well beyond scoring tries and dazzling runs.

Perhaps the best example of his freakish array of talent and intelligence was seen in the 2021 Top 14 Final against rivals, La Rochelle.

As Kolbe explains, the strategy had been to keep taking points whenever they were on offer against the very physical La Rochelle, and keep building scoreboard pressure.

With the halftime siren sounding, Kolbe took the ball, steadied himself and struck the most incredible drop goal….from the half way line. It took the score his side’s lead to 12-0 as the teams headed to the sheds and La Rochelle must have felt as if there was nowhere on the pitch that was safe.

Luckily for Kolbe – and fans of the game – South Africa changed their policy on overseas players being able to represent the Springboks in 2018 and Kolbe was quickly added to the team.

At the highest level of the sport, there hasn’t been any hint that his smaller stature will stop him from becoming as legendary as fellow South African winger Bryan Habana.

From 18 Tests, Kolbe has scored 45 points and been such a threat that he always attracts numerous defenders, creating space for his team mates.

Kolbe is known for his speed but it’s a combination of top speed and initial acceleration that make him deadly.

His 100m time of 10.7 seconds puts him up there with the fastest players to have ever played the game but it’s his acceleration over the first 5m from a standing start that gets him through gaps and away from desperate tacklers.

He uses his low centre of gravity to his advantage and is able to turn on a five cent coin.

This, combined with his quick feet, have made him so hard to tackle – he is constantly able to adjust his line in the final milliseconds before impact with a defender so that even if he doesn’t get clean around them, he ends up bursting through a hopeful waving arm of a defender.

His try in the final few minutes of the 2019 World Cup Final is the perfect example; Owen Farrell left grasping at air as Kolbe crashed through the arm of the England captain, who thought he had the South African winger perfectly lined up for a big hit.

“My footwork is definitely partly down to playing in the streets, hanging out with my friends and being competitive with the big boys,” Kolbe says. 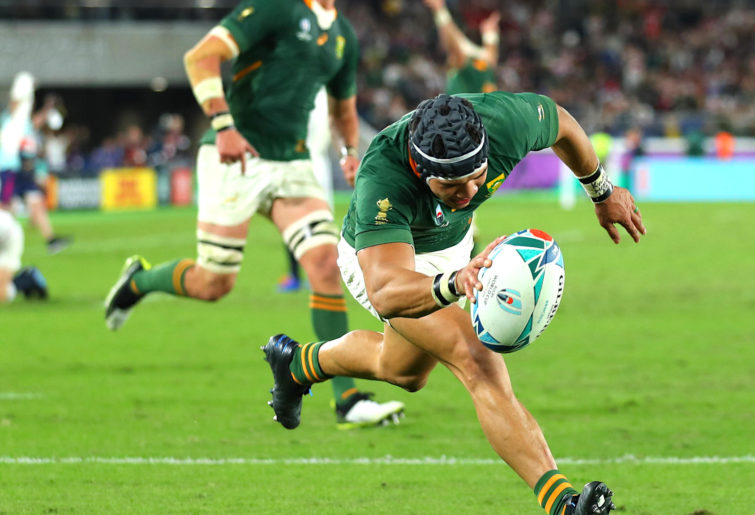 Funnily enough, it could be that his feet are too quick for his brain, causing chaos for defences.

“Sometimes I’m not too sure what I’m going to be doing,” he says. “My body just completely takes over. It’s pure instinct, I think.”

Try creating a defensive plan for that!

In defence, he’s reliable with a successful tackle completion rate of well over 82 percent for club and country and, as was seen in the recent Lions series, he is effective under the high ball and able to out jump many competitors.

And he also creates plenty of tries – 35 in the past four years – making it clear Kolbe is much more than a fast guy who can score if given some space.

The success and financial rewards that Kolbe has earned don’t seem to have changed his work ethic or his humility. In April 2021 he was pictured cleaning up rubbish from the pitch just minutes after helping Toulouse to beat Munster at Thomond Park.

Cheslin Kolbe, arguably the best player in the world right now, cleaning up rubbish around the pitch at Thomond Park after full-time…

This is just one of many examples of where the Springbok hero has naturally been willing to give his time for others and help out his team however it is needed.

His work with the Be The Difference Foundation has helped the organisation tackle poverty in his home community – the organisation fed 400 people a week at the start of the Covid-19 pandemic lockdown in the Western Cape.

As Dave Rennie and his leadership team look to the weekend and their plans to overcome South Africa, a lot of time will be spent on trying to figure out how to stop Kolbe from adding to his nine Test tries.

With the way the Wallabies have leaked tries this season, coupled with their average kicking game, it would be no surprise if Kolbe is on the scoresheet more than once.

But if, or when, he is on that scoresheet, fans from all sides will likely still look at Kolbe and smile. He’s a special player with an engaging story and a genuine humility that is irresistible.

'The boys and staff felt really disrespected': Why this photo has Argentina coach fuming

Argentina coach Mario Ledesma believes his team was treated disrespectfully after they weren’t included in a Rugby Championship photoshoot in Townsville.

'The boys and staff felt really disrespected': Why this photo has Argentina coach fuming

The wins just keep coming for the Wallabies, backing up a pair of wins over the Springboks with a comfortable, if not clinical, 27-8 victory over Argentina.

After the high of the Wallabies’ stirring double defeat of the World Champion Springboks, their performance against Argentina carried a sense of deflation for coach Dave Rennie.

Forget all the official pronouncements, forget all the justifications. SARU may have gestured globally at the COVID-19 pandemic, it may have pointed the finger southwards at the NZRFU’s “unilateral decision to proceed with a domestic or trans-Tasman competition.” 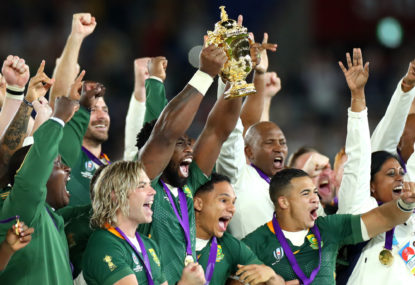