With a plethora of fast paced games, loads of points, plenty of high flying acrobatic finishes, and of course the tough stuff in the middle, I have tried to riddle down a best 13, with only one utility player or a-super sub.

1. Tom Trbojevic
Any surprise? He is the best player on the planet. He will win this year’s Dally M Medal and he is potentially the most influential player since Andrew Johns. There is no weakness in Turbo’s game, on and off the field.

A humble kid from the Northern Beaches, he plays as hard as anyone can possible play, never complains, gets on with the game and has the skill to match. One of the best individual seasons of all-time… and he only played 15 games this season!

2. Brian To’o
The man known as “Bizza” had a mammoth 2021, where he made his mark on the competition. After a grand final defeat in 2020, To’o changed from the right side to the left side to accommodate the chemistry between he and Jarome Luai, and he did not miss a beat.

Fourteen tries in 18 games, countless 200-plus-metre games and a lot of memorable interview and dancing breaks, this kid has it all. He debuted for NSW this year and did not look out of place, not at all. The metre-eater from Mt Druitt deserves his spot in this side. 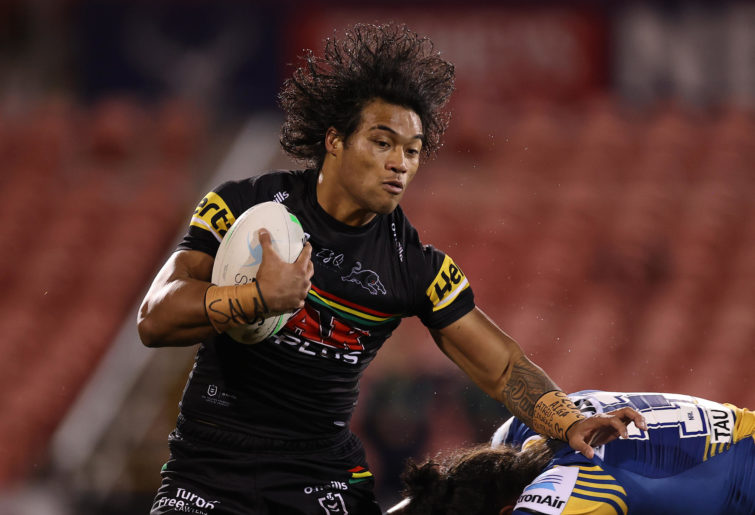 3. Justin Olam
The PNG international burst onto the scene and was fiercely known for his aggression in defence. 2021 has seen Olam evolve into a very well-rounded centre, with a sharp attacking prowess and he has perfected the offload and draw and pass to set up his outside men, but he has also kept that intense defensive prowess which has made him a very feared player.

A constant staple in the Storm’s strong left side, Olam should be very much credited for almost a hand in all of Josh Addo-Carr’s tries this year. Powerhouse year from the Papua man.

4. Joseph Manu
Always known as a top centre in the competition, the thing Manu did in 2021 was show just how good he is as a player in his whole game. Stints at fullback and in the halves this year just showed the skillset of this man and he rightfully in this team as a top centre.

When some games were on the line, the Roosters went to the Kiwi international who loved to roam, and asked him to carry them home. Unfortunate ending to his season in the game against the Rabbitohs, but nonetheless, a very impressive season for Manu in 2021, after which people are calling him to be the next “million dollar man”. Well deserved, if so.

5. Reuben Garrick
Contentious pick this one, as Alex Johnston, Josh Addo-Carr, hell, even Jason Saab came to mind, but I had to go for the league’s leading point scorer, given the feats he reached this year. I will admit, without Tommy Turbo, Garrick seems quite pedestrian, in which wingers like the Foxx may outshine him, but when Turbo is on, Garrick is also, very much on.

Only four players before Garrick have scored over 300 points in a single season, and this year he makes himself the fifth. The plethora of tries he was gifted by his fullback is immense, but his ability to finish them as well, is something to behold.

He is very much a great finisher and filled in at fullback admirably, when required. The back three of the Eagles could honestly make up this team, but I could not go past Garrick here. What a season!

6. Cody Walker
The fiery man from the Rabbitohs had a hell of a season in 2021. The way he sets up his outside men and his deft touch is something to behold. Walker finished with 33 try assists and 43 line break assists, vastly outdoing his competition. I have always said, the less Cody touches the ball, the better, in an odd way.

He seems to let Damien Cook and Adam Reynolds touch the ball for the majority of the game and when he wants it, you know something magical is about to happen. When he inserts himself as the second man option, it almost always leads to points or a line break. He has made the Souths’ left edge potentially the best edge in footy.

7. Jahrome Hughes
Relax, Nathan Cleary fans. It’s not who is the better player, it’s who was better in 2021, and given the injury to Cleary and Hughes’ numbers, it is hard to look past the man with the headgear from Melbourne. With his strong suit always being his running game, Hughes is always a threat on the Storms’ right hand edge, but this year he seemed to develop his kicking and passing games, which lead to quite strong numbers.

Nineteen line breaks, 13 line break assists and 19 try assists, he has come leaps and bounds in the 7 jersey. Formerly known as a makeshift halfback under the Bellamy system, he has solidified himself as a premier halfback and can challenge Cleary for top spot. Well deserved and what a journey for Jahrome!

8. Payne Haas
The mountain man from Brisbane has been one of the few highlights for the famed club. His work rate seems to increase every year and he just seems to get better and better. Effort is always there, his engine never stops and he stands out as a leader in such a young side.

Potentially looking at a lifetime deal with the Broncos, the man is worth every penny.

9. Brandon Smith
If it weren’t for injury, I think Reed Mahoney would be the man in this position, but given the cruel nature of injuries, I have gone with The Cheese for this spot in 2021. His first three weeks, he seemed to be struggling on form with his weight and speed of the game, but as true professionals did, he has lost weight and been in shape to play a very productive hooking role for the Melbourne Storm.

Only playing hooker for maybe 50-55 minutes a game (when Harry Grant comes on), he has done more damage in that timeframe than most hookers in 80 minutes. His 11 tries in the regular season is astonishing for a hooker and he seems to be the energy feeder for a Storm team that potentially lost the best player to ever play the game.

The scary thing about Brandon winning the position is the back-up hooker to him could have potentially been the second for this spot, as well. Scary hooking talent down south.

10. James Fisher-Harris
The unsung hero in the Penrith pack, no forward in the black jersey does the work quite as well as “Fish”. He goes about his work as quiet as anyone, but his stats speak for themselves. He may not always be the first prop who comes to mind in a list of top Props, but definitely deserves to be selected.

Leads with actions and is always putting the talent spine in his team on the front foot.

11. Isaiah Papali’i
Coming from the Warriors at the end of 2020, Paps was potentially just a development forward for Parramatta. Fast forward six weeks into the competition, he usurps Shaun Lane and is easily the buy of the year.

His strong carries have become a staple in his game and he has just come in leaps and bounds at Parramatta. From a reasonably unknown player to a household name, Isaiah has developed into a premier second rower and is a great edge runner on the left side of Parramatta’s attack.

12. Angus Crichton
No David Fifita? Yes. As barnstorming and wrecking ball-ish as he has been this year, I have gone for a more stable, solid and proven player, who lifted his game to new heights in 2021 given his team’s rapid injury list, in Crichton. 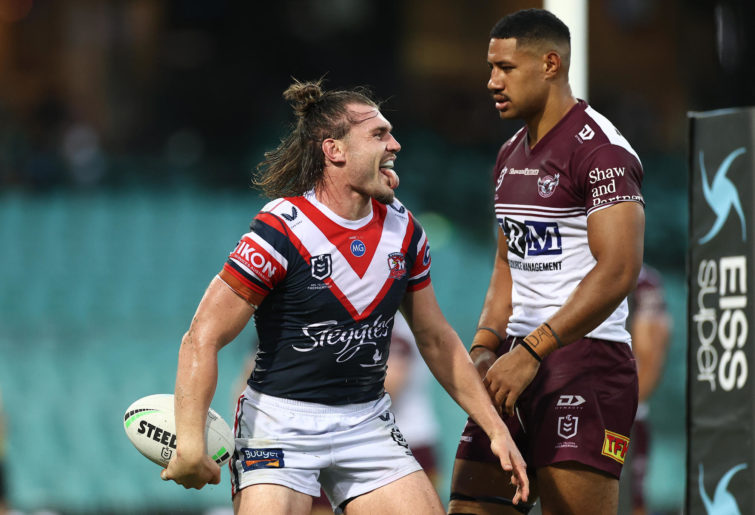 After his captain and locking buddy Cordner retired, all eyes moved to Crichton as the premier second row in the side. Not only did he elevate his game, he seemed to help his teammates elevate theirs too. Forming a very formidable duo with Sitili Tupouniua, they held up a forward pack decimated with injuries.

When on the field, Crichton plays the enforcer well and deservedly so, was bought right back into camp for New South Wales when rubbed out for Game 1 due to suspension. Quality player who just gained more confidence and skills during the year, in for a huge 2022 with much more help on deck!

13. Cameron Murray
Looks like a Jane, hits like Tarzan. Cam Murray is the epitome of a player who looks too pretty to play, but plays with such aggression and flair, he demolishes any impressions of himself, based on his look. The glue to the Rabbitohs pack, he holds the middle down together well and gives them that middle forward ball-playing option, as well as playing strongly on the edges, if needed.

Starring for NSW this year and for his club side, Murray seems to have adapted to the new style of 13s, where ball playing is key, but has also kept his aggression in defence and attack. Tireless player who works his arse off for his side, one of those guys you want in your side.

14. Harry Grant
The best substitute player in the competition, because he is arguably a top-three player in his own position already! The benefits of having Smith play hooker and doing the tough work, then bringing on Grant who has fast legs and loves to dart out of dummy half, is a problem for all teams not named Melbourne Storm.

With what will potentially be another new style of play given the speed of the ruck now, two hookers may be the best option for any team moving forward. Grant’s ability to skip out of dummy-half with tiring forwards is a worry for all opposing coaches and not only is he superb at it, almost every time, he gets it right.

As a starter, I have my doubts about Grant, but as a pure player and an interchange one at that, you cannot look past his skill and ability in what he has proven in 2021.

Do I make a second and third team as the NBA folk do? Potentially…

What changes would you make in your side? Let me know in the comments.