Loosely translated, an old African proverb says: ‘A person is a person because of other people.’ Many people made Siya Kolisi, the Springboks rugby captain, the person he is today.

Famously, they are the women who raised him, the wife who inspired him, his teammates who seemingly will follow him barefoot over broken glass, his children who remind him why he plays the game that made him a star, and the coaches whose names we know.

This week, I talked to a lesser-known coach of Kolisi’s – Fred Swarbrook, from Derby, England.

Swarbrook is the high school coach we all remember: comfortable with any sport. Because he really is a coach’s coach. He has a great coach’s voice too: “The boys heard me before they saw me.”

Ruddy, plainspoken, and ready to laugh, Swarbrook was a breath of fresh air. By the end of our chat, I was ready to run up Brickmaker’s Kloof for him, a steep hill in Port Elizabeth (renamed Gqeberha, the Xhosa name for the Baakens River that runs through the city to the Indian Ocean). A good, tough man.

So, how did a Derbyshire cricketer come to be in South Africa? It started with a conversation at Lord’s in the 1970s, when Fred was in his early twenties.

“My friend and I were playing at Lord’s,” he recalls. “It was a Monday. In August. We wondered what we were going to do in the winter. So, it was why don’t we go to South Africa? We wrote to the provinces. I got a reply from Griquas in Kimberly. He got a reply from Transvaal. So off we went. When we got to passport control, I told him I would see him in six months’ time at the same place.”

Swarbrook was homesick at first. He walked around the whole town of Kimberly. “It took me 20 minutes.” 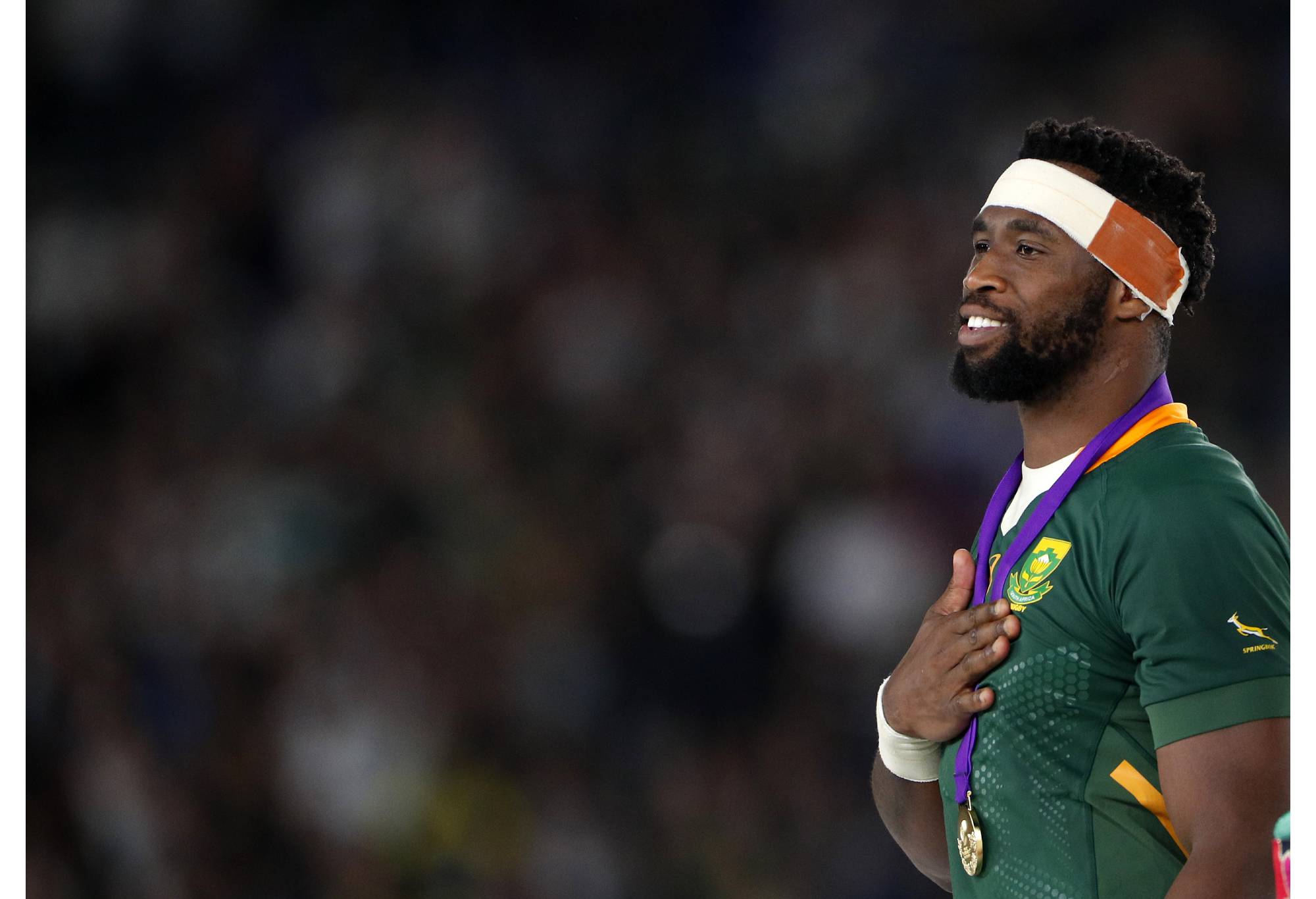 But he found the people of the Northern Cape friendly, and in the end, he met his South African wife in Kimberly. After bouncing back and forth between the Republic and the United Kingdom for years, they settled in South Africa, and started a family.

Swarbrook knows how to stick. My friend Paul Rayment, who spent a couple of frustrating days trying to bowl him out, said the stubborn batsman could not be budged on a flat track (which Kimberly decidedly is) and apparently he holds the honour of the slowest 50 in first class cricket ever. His first-class career, in which he twice took all ten wickets, ended in 1985.

When he began coaching, Swarbrook focused on development in the townships of the Northern Cape, an interest he maintained when he and his family moved to the Eastern Cape, for Fred to coach cricket at Grey High School from 2005 to 2015, a time span which included Kolisi’s matriculation.

To coach at Grey High was exciting for Swarbrook, and he was happy to add rugby to his cricket CV. He was a flyhalf in Derby schools rugby when tens “kicked with the front of the toe.”

He told the Grey High coaching staff he wanted to be involved. He even coached goalkeepers in hockey. Then, he worked with the rugby teams for conditioning.

“On a Monday, I would ask the coach if he wanted them stuffed up,” he says. “If he was a bit upset, he would say ‘give them everything.’

“I would take them to the beach and make them run to the pier. They thought that was it. But there was a hill – Brickmaker’s Kloof – on the way back to school, and we would make them sprint 25, walk back, then 50, then back, then 75, and back and then all the way up the hill, and there was a little green and they would flake out on the top.”

He would never let anyone lag. The team had to push everyone. No one was left behind.

“That’s where we got the gees (the spirit).”

He had all his team do the same drills. 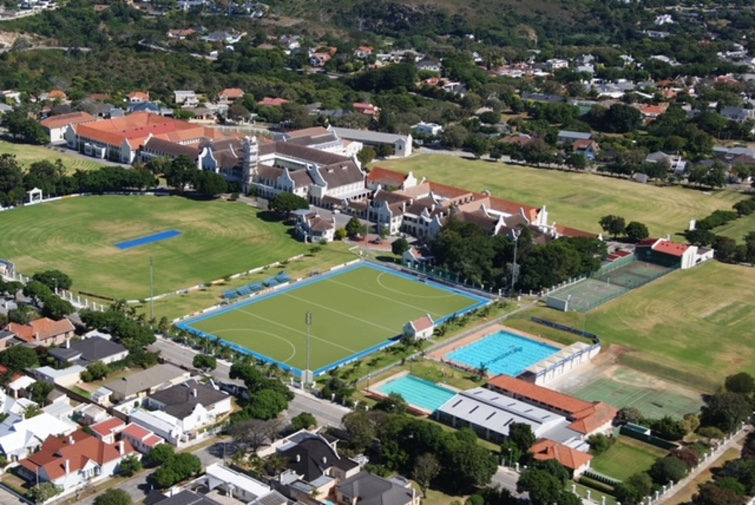 “You get some guys you can bollock. Some you have to baby a bit. But the nice thing is they all gelled together. It made my life easier.”

Even as conditioning coach, Swarbrook’s ethos was to build a team inside these fitness drills.

“At Grey High School, everyone works as one unit. If one is lagging behind everyone would pull them up and be a unit.”

What a daunting place this might have been for a malnourished lad from one of the most dangerous townships in the world. Fitting into a culture so optimistic and habituated can be difficult for most.

“So the old School stands in its ancient fame. With its front to the southern seas. And the new Grey comes with an old Grey name And falters, “If you please, My father was here in a bygone year, And he loves the tale to tell.”

“And the guard is proud and his voice is loud, “You are here! Pass, friend; all’s well!”

Siya did not come as a new Grey with an old Grey name. His name was new, and so was he.

You could imagine what an English-language school in Port Elizabeth founded in the mid-nineteenth century looks like, and sounds like, and you would be right: Grey fits that mould. 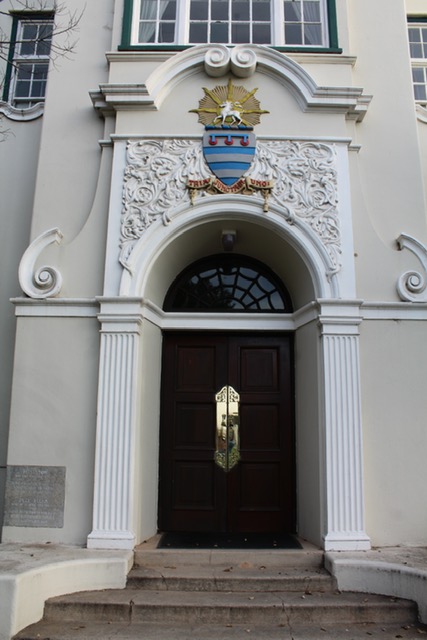 The last two players, as well as Stormers flyhalf Kurt Coleman, were on the team when Kolisi arrived, after impressing scouts at a tournament.

The problems Kolisi faced were manifold: he did not speak English, for one. He had no transportation and no resources. His mother, Phakama, passed away when he was 15.

It was not an easy transition for the young boarder. Just knowing what to do and what to say was one of the more difficult challenges. We know, in rugby, we can let our playing do the talking for us.

But there is the simple matter of not having enough calories. Kolisi has been quite transparent about how desperate his situation was. In an interview with the Daily Mail, he tried to describe it.

“I can’t explain in words what it’s like when you wake up not knowing when you’re going to get food. It becomes normal,” he said.

“Food is something you should have. I remember the worst nights, when I would be lying in bed with my stomach rumbling.

“It was so sore, like a tummy ache. Sometimes I only had one meal a day, which was the meal I got at school. It was a slice of bread… that’s it. It’s probably the worst experience I’ve had: being hungry. It was horrible.

“I’d cry to my grandmother. She had no answers but she used whatever she had to make me happy. Either reading me a story, saying something nice to me or making me sugar water. That kept me going.”

“When he came to Grey, he couldn’t speak English,” says Swarbrook. “Another schoolboy, flyhalf Nick Holton, who spoke Xhosa, took Siya under his wing and taught him to speak English.”

Kolisi named his son Nicholas after his friend. He does not forget the people who helped him be the person he is today. He comes back to Grey High. Not too long ago, when Kolisi was awarded his honours blazer, he walked right into the sea of boarders.

“He did the boarders’ song right in the middle of the boys,” says Swarbrook. And not for the only time in our interview, I saw the teacher’s tears.

Another story he told me made us both tear up.

“We had a camp at school to get ready for a rugby festival,” he recalls. “We picked up Siya, because he had no transport.

“At the end of the day, we took him back. On the way to Zwide, we stopped at Steers and got him a chicken burger. We sat in the back of the bus and we ate some chips with him. We asked him if the food was good. He said he wasn’t eating it. He was saving it for his family ‘so we can eat it together’.

“So we went back to get him another one, and told him to save the first one for his family. I’ll never forget that.” 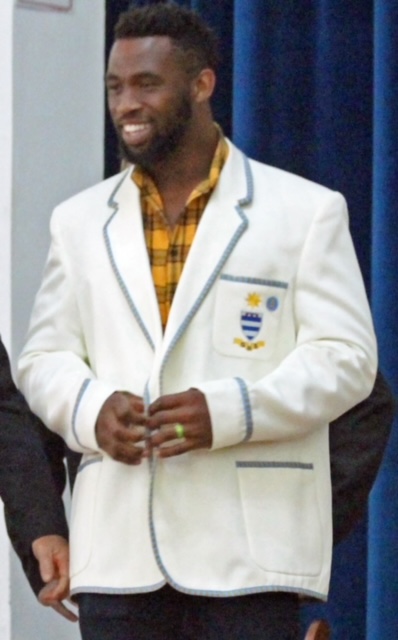 Kolisi in his blazer. (Photo: Supplied)

It was clear that Swarbrook’s gruff heart was touched by Kolisi. And maybe that is the most important thing about the Bok captain.

He inspires emotion in the toughest guys. Enforcer Eben Etzebeth is commonly known as one of Kolisi’s best friends; Etzebeth’s emotions around Siya are often readily apparent.

Kolisi seems to have a long memory: he still goes back to Zwide. He has not forgotten.

Swarbrook told me about quiet and profound things Kolisi does: buying kit and clothing for Zwide kids, taking the supplies himself, and more than anything else: “He’s got time for everybody.”

But none of that would have been possible had Kolisi not make the cut in rugby.

Swarbrook remembers: “I noticed him at 16A. He was something special. He stuck out. He played 8. In everything he did. Head and shoulders above everyone else. He was tall and thin at 16A. From there on, he got bigger and stronger. Naturally.

“We weren’t trying to build guys with watermelons under their arms.” He wanted fit players, strong in the tackle, and ready to play with the ball.

“On match day, when he had the ball, Siya would push tacklers away. Tacklers would bounce off him. He would carry four boys with him. Then he would offload as he fell down. The boys in the stand would roar. And chant his name: ‘Siya, Siya.’’

This was when Kolisi became known as ‘Bear,’ a nickname he still uses on social media.

By the time he left Grey High, Kolisi was a prefect, part of a team responsible for general discipline in the school, and leading other students to be punctual, use good manners, and uphold Grey values.

“Siya had the personality for a captain, But he was not the captain of Grey High,” notes Swarbrook.

Perhaps this is also one of Kolisi’s secrets: he does not take it for granted?

“He is so humble,” says Swarbrook. “The success he has had, there is a lot more there for him, but he is still humble. Lovely guy.”

Swarbrook (and Grey High) have never claimed undue credit for Kolisi’s success. In fact, I gained the impression that Kolisi is one of the people he believes helped him become the man he is.

“He is one of them that inspires people,” says Swarbrook. “In my own mind, I’ve got a little bit there. Not a lot. I’m very proud of him. He’s a top man.”

He believes Kolisi has not yet reached his full potential: “I hope there is more to come. He is being looked after properly. He looks a lot fitter. But not against England!’

A modest coach far from home helped a humble boy find a home at an old, good school, and in so doing, in ways big and small, inspired a nation.