A big thank you once again, to all those who contributed a question, or helped develop one at the call-out stage.

Where is the easiest fix in the Wallabies’ game that can be focused on within the RC, to reduce the number of points they are conceding? Is there something within their defensive structures going awry? Or is it the amount of turnover ball they are gifting the opposition?
– Numpty

At the breakdown, perhaps? Australia is missing an on-ball presence at the defensive ruck. Our accuracy at the attacking breakdown is not great either
– Mused6

The debate between attack and defence is always a ‘live’ one, and it is particularly sharp right now with the two leading teams in the Rugby Championship (South Africa and New Zealand) adopting diametrically opposite approaches to the game.

Rassie’s outburst after the first Test against the Lions was all about shifting refereeing perceptions: from favouring the attack in contact situations, to favouring the defence.

For South Africa, the best means of attack is defence. They are not a pyrotechnic multi-phase team who can pass and run their way through, or around an opponent. They rely on their defence to create opportunities that their attack can finish quickly with a minimum of fuss.

A perfect example occurred in the first round of the Rugby Championship versus Argentina.

The cutting edge to the attack is provided by a kick-chase pincer, in which Sbu Nkosi (from the right wing), and Eben Etzebeth (from the second row) converge on the high ball together.

As soon as Etzebeth claims the ball, it becomes a turnover scenario in which Argentina will be disorganized for the next five or six seconds. South Africa’s thought process on the next phase is crystal clear. They don’t want to put the ball through the hands, they want to get the ball into the space on the far edge as quickly as possible, with another kick by Elton Jantjies.

There is great skill on show, from Jantjies finding the space with his left foot and especially, from wing Aphelele Fassi collecting the ball one-handed just before it crosses into touch. But it is still an attacking highlight generated by defence, a moment in which the traditional skills of running and passing are bypassed.

The debate between South Africa and New Zealand may eventually be decided by the speed with which one of the two teams can incorporate features of play which ‘belong’ naturally to the other.

Although claims that New Zealand can defend as aggressively and energetically as South Africa are wildly off the mark, they have shown signs in the three Bledisloe Cup games that they are looking to re-weaponize on defence. Defence was their soft underbelly at the 2019 World Cup.

They converted five intercept tries against the Wallabies, mostly in situations where they were under pressure after Australia had made real inroads on attack. Two of the intercept tries were examined in this article after the second Bledisloe game.

The fourth occurred in Perth after the Wallabies had cut New Zealand open with a long break from Noah Lolesio.

The Springboks would probably have found a way to put in an attacking kick over the next couple of phases, but Australia are determined to keep ball in hand. 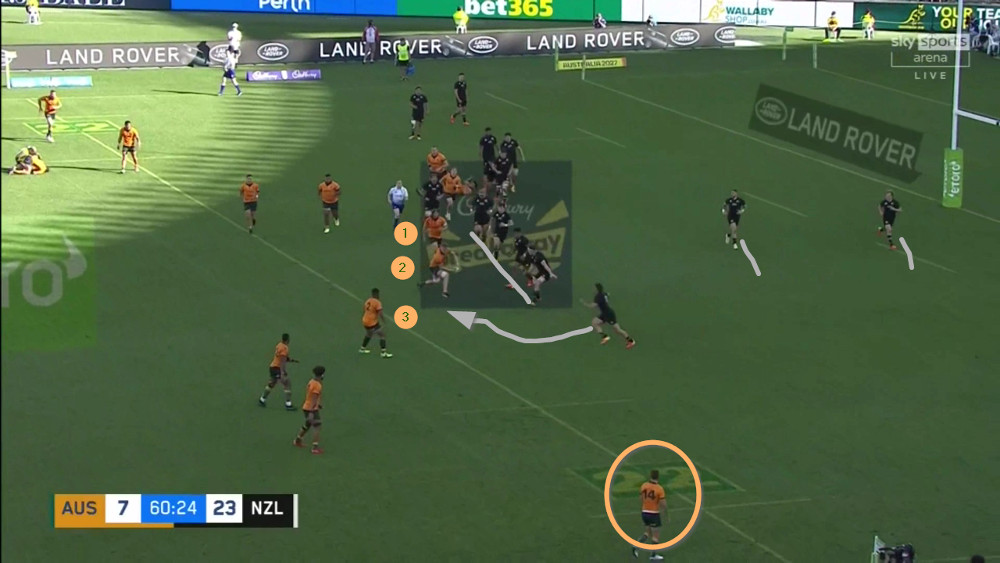 Andrew Kellaway is in space on the right, but the ball will never reach him through the hands of three Wallaby forwards (Michael Hooper, Matt Philip and Folau Fainga’a). It is an example of how ball-in-hand attack at all costs can become self-defeating, and it relates to another question from this week’s forum.

I’ve become convinced we’re adopting a game plan we aren’t good enough to implement. We got behind the Kiwis a lot through the series and then failed to capitalise. If we narrow our ambitions on attack are we able to contemplate breaking down the top defences or is it that we just have to get better at the current plan?
– Ozinsa

From the New Zealand perspective, there is something of a trade-off on defence. David Havili eventually runs the intercept back for a seven-pointer, but the original break was caused by New Zealand over-resourcing their defensive breakdown. 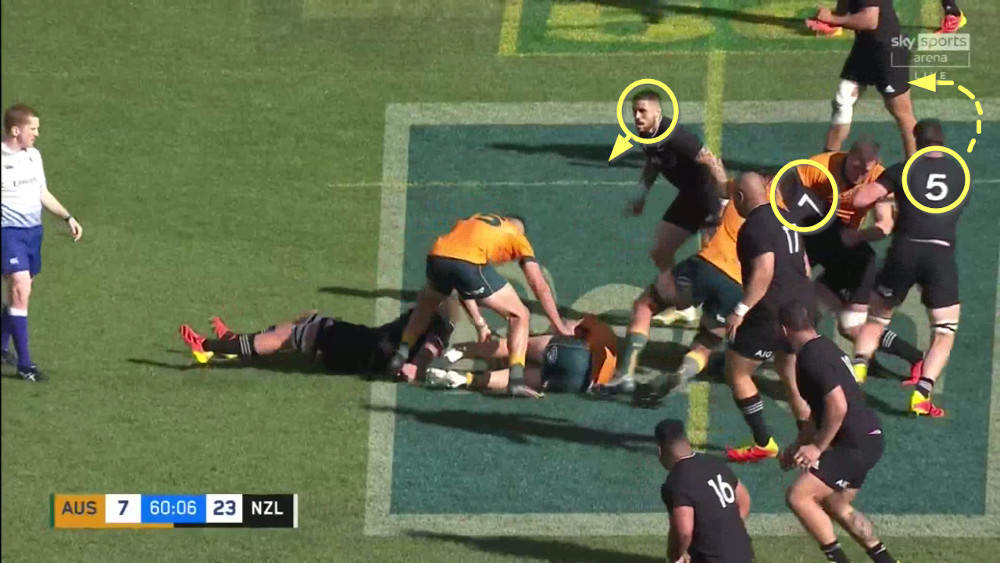 Scott Barrett is struggling to disengage from the tackle area and get out to his spot at first defender, while TJ Perenara is still looking in Tate McDermott. That ill-discipline creates the hole for Marika Koroibete and Lolesio to exploit with the in-pass.

In the course of the series, New Zealand tried to weaponize both their intensity and numbers at the defensive breakdown.

There is a widening gulf between both the number of outright steals, and defensive presence around the ball as the series unwinds.

Dalton Papali’i is a real workhorse for the All Blacks on both sides of the breakdown with 40 presences, but he gets great support from the second row (one steal and 24 presences) and hooker (two steals). Michael Hooper (one steal and 28 presences) does not enjoy the same level of support, especially when Brandon Paenga-Amosa is unavailable.

The essential points can be reinforced with further examples.

The All Blacks are happy to overload the breakdown with both Ethan Blackadder and Anton Lienert-Brown, even though Jordie Barrett is still off the field and they are down to 14 men.

The Wallabies meanwhile, are becoming hypnotized by the desire to keep ball in hand at all costs, and they are reliant on forwards who have not been up-skilled sufficiently to provide width on the pass.

Flip the coin over, and the All Blacks are taking a lot of risks in the trade-off between disciplined inside defence and potentially game-breaking turnovers.

That led to New Zealand’s fifth interception try of the Bledisloe Cup series, but again it came off the back of a Wallaby tackle-break near the ruck.

How did you assess Pete Samu’s impact? Keen for your thoughts as recently you commented you said his time was done in gold. He won Super titles with Crusaders. Brumbies best back-rower (I know some might argue Valetini); however, I believe he’s a far more all-round player. I don’t know what Rennie’s issue is with him. I know coaches usually always have one or two guys they just don’t see it in them. However, that slapped you in the face yesterday, Dave Rennie. Even my Kiwi mates who I caught up with yesterday for lunch were like where has he been hiding this series.
– TJ Force Fan

Pretty lucky to have Pete Samu on the bench when Hooper needed some repairs. Pete is one the properly trained smart guys we have. Was a very good Shute Shield player, couldn’t crack the Tahs, was smart enough to head to Christchurch for some education, received proper training in Christchurch then comes to the Brumbies and hooks up with Laurie.
I think Rennie just doesn’t like Pete’s size but he lets Lachie Lonergan off the hook for being small.
– MO

One of the players who can help to redress the balance, both in terms of on-ball presence in defence and up-skilling the Wallaby forwards on attack, is the Brumbies’ back-rower Pete Samu.

Samu was harshly excluded after starting in the first Bledisloe Cup game of 2020, which the Wallabies eventually drew. Bigger bodies were preferred, first Ned Hanigan, then Lachie Swinton, and this season, Rob Valetini.

Dave Rennie has shown his hand in back-row selection; he clearly prefers the extra size and physicality to an added bonus out wide in attack, or the extra on-baller at the breakdown.

I doubt that will change, but there is still a very good case for Pete Samu to be in the matchday 23. He can cover all three spots in the back-row, and the Wallabies will lose nothing at lineout time when he enters the fray. The 15-minute cameo at Perth could easily be expanded profitably to half an hour.

Pistol Pete made an impact with his first touch of the ball.

The New Zealand defence is once again in a state of ragged disorganization around the ruck. 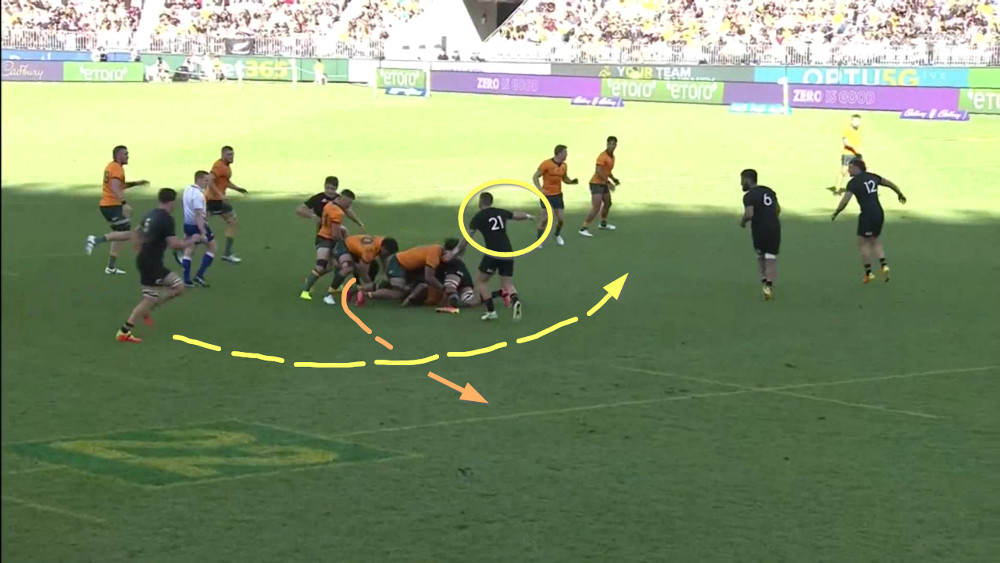 Perenara mistakenly beckons Scott Barrett to wrap around the to the far side, leaving a nice juicy hole for the pick-and-go by Samu.

Pete Samu’s excellent decision-making and offloading in the wide right channel is one of his outstanding attributes in Super Rugby.

This is one offload which does go to hand and keep the ball in play, enabling Samu to circle back and re-ruck over the top of Samu Kerevi. On the following play, Nic White spots another large gap in the All Blacks’ inside defence to set up an easy try for Tom Banks.

Thanks again to everyone who submitted a question!