How to fix tribunal inconsistencies with raised elbows

Toby Greene’s suspension for his hit on Dangerfield in Round 21 has again highlighted the inconsistency in the decisions made by the AFL tribunal.

It seems to be that the match review officer chooses to cite players who cause injury and not cite them if the targeted player continues to play.

How does this work in cases of delayed concussion? It appears to me to be very hard to find the exact moment that concussion occurred. You don’t need to be knocked out to suffer a concussion.

It’s also not a great feeling to have a concussion, I have unfortunately suffered three or four during my playing days. The last one led to me ending my playing career after I convulsed on the field. It took me several weeks to recover.

The impact should only play a part in determining the sentence. For instance, elbows to the throat or head should all receive an automatic two-week penalty regardless of the outcome of the action. The outcome could add weeks or a further fine, maybe on a sliding scale.

Patrick Dangerfield on Nick Vlastuin
Many people talk about two actions. Dangerfield extends his arm to punch the ball away and then brings it back in a natural motion. If you don’t agree, try running at speed and keeping your arm outstretched. Contact is then made with Vlastuin’s head.

Should have been? This is where ‘is it a football action?’ question needs a hard definition. It’s maybe worth one week.

The outcome should not come into play until a guilty verdict is returned. You need to ask: what real options did Dangerfield have? If he didn’t bring his arm in, what might have happened? There could have been a clash of heads between Dangerfield and Vlastuin, and he maybe could have even collected Dylan Grimes.

What Vlastuin was doing running flat out into a contested contest is another question that should be asked. Even without Dangerfield’s arm there he was going to possibly suffer serious damage or cause damage to Dangerfield and his teammate. Where was the time to do anything else?

If this had been a suspension, then it would have opened a bigger can of worms, as you would then have had to look at every contest that caused someone to be hurt and decide whether it was a football action or not.

Toby Greene on Patrick Dangerfield
Greene had time to make up his mind. He saw Dangerfield coming and still had time to collect the ball. Greene comes up with the ball with his arm braced in front of him.

Should have been? It was probably worth two weeks.

He did have other options, and he did have more time to make the decision. If the forearm had stayed down, Greene would have had nothing to answer for. Greene had a better option than Dangerfield – he could have turned his body and not raised his arm.

But then again, this could have led to a head clash as well. Do we want to suspend players who go for the ball and clash heads in this type of contest? It is different to electing to bump, where Greene takes responsibility for any hit to the head. Would the debate be the same if Greene had elected to bump Dangerfield? We have seen that a player can be suspended for bumping if they make contact with the head. Shouldn’t the elbow be the same when the head is involved?

There is also the debate of whether it is a football action or not. The biggest difference between Greene and Dangerfield’s actions is that in the case of the latter the arm was already up, but the former raised his forearm.

Greene lifting his arm is what caused the report and subsequent suspension, though Dangerfield slipping exaggerated the hit and made it look worse.

Joel Selwood on Josh Kelly
Selwood takes the ball while standing, his forearm is raised and he hits Kelly. A free kick was awarded. Kelly continued playing until the free kick was paid, and he didn’t leave the ground like Dangerfield.

It should have been a week.

Verdict: Nothing to answer for.

Did Kelly staying on the ground play a part in Selwood not being cited? Should it have? No. If Greene got two weeks before being downgraded to a week, then Selwood deserved one week. He had other options. He could have stayed low or turned his body, as Greene could have. The injury factor should only come into play after the decision has been made to suspend a player.

Dustin Martin on Adam Kennedy
The ball is about to be kicked back into play after a behind. Dusty was running across the top of the 50-metre line and elbowed Kennedy in the head. A goal was then scored from the resulting free kick.

It should have been a minimum of three weeks.

Dustin Martin gave away a free kick in this incident.#AFLGiantsTigers pic.twitter.com/g4EaF30bQA

The behind-the-play aspect needs to be treated more harshly, Personally, if the incident is off the ball, the suspension should be judged more harshly than an incident that occurs in play. It was about 50 metres away from the ball at about the 50-metre line before the ball was kicked back into play, therefore not even in play.

The fact the Tigers appealed and had it downgraded to one week I still find troubling. It would be interesting to see what the verdict would have been in the current environment about the head.

David Astbury on Lachie Plowman
Astbury had just received a free kick and Plowman was a little slow to release, so Astbury threw his arm back aimed towards Plowman’s head.

Is David Astbury in trouble for this after being reported for striking?#AFLTigersBlues pic.twitter.com/u09EVvdzYI

Astbury’s showed more intent than Dangerfield or Greene. He had just received the free kick, so play had stopped – it’s worse given the whistle can be easily heard and the umpire is not that far from Astbury.

What else would Astbury have expected to be there? What was the reason for throwing his elbow back? He clearly intended to hurt Plowman, otherwise why throw the elbow back in the first place? He could have easily just pushed back using his whole body.

He should have received at least two weeks. The suspension should have been based on the intent of the action, which was to hurt, not on the outcome.

Lance Franklin on Luke Ryan
This was very similar to Astbury’s elbow on Plowman but more aggressive. The tribunal considered that he was being dragged to the ground, which may have impacted the force of the elbow. However, the counterargument is Buddy knew Ryan was there and still threw the elbow.

Verdict: one-match suspension, then downgraded to $3000.

Joe Daniher on Dane Rampe
Daniher had just been awarded the mark. Rampe was still holding Daniher after the mark was awarded. Daniher then swung the elbow back while trying to turn his body. Again – like Astbury, like Buddy – he knew Rampe was there.

Aaaand Joe Daniher is on report.

Busy first quarter as a Lion!#AFLLionsSwans

How to fix the inconsistency

For each of the above incidents contact was made with part of the arm to the head of an opponent but with differing outcomes at the tribunal. No wonder people are confused. The judging of an incident considers the following matters.

1. Was contact intentional or careless?
Careless action would be in the motion of playing the game – for example, punching the ball (Dangerfield) or collecting a loose ground ball (Greene, Selwood et cetera) – or it occurs because of a proper tackle, though not the tackle on Mitch Duncan

Intentional actions are those where the player knows what he is doing and are not football actions. Examples here are throwing an elbow backwards (Astbury, Buddy et cetera), the action not occurring in play (Martin) or play when play has been stopped by the umpire (Astbury). Sling tackles and pushing a player over the boundary line towards the fence are also included. 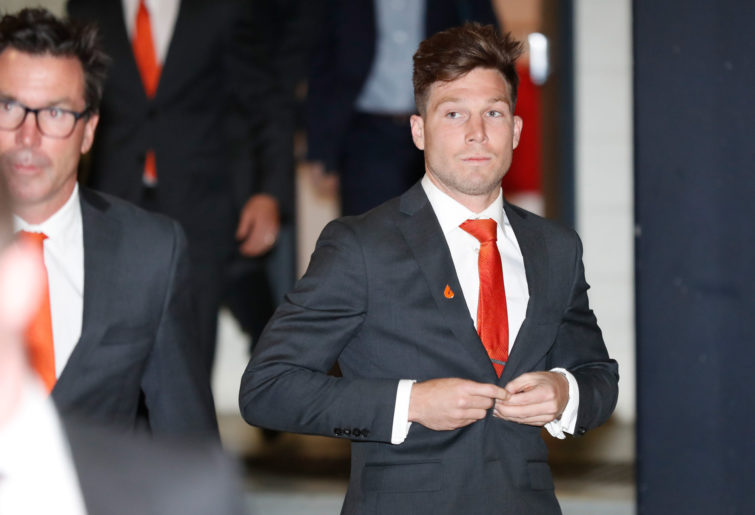 Toby Greene of the Giants arrives before his AFL tribunal hearing at AFL House on September 09, 2019 in Melbourne, Australia. (Photo by Michael Willson/AFL Photos via Getty Images)

2. Was the impact severe, high, medium or low?
This should only come into play after the incident has been judged as worthy of a suspension, not before. It causes too many issues if it is involved in deciding a player has something to answer for. It would mean the player is suspended due to the action rather than the outcome if this change were made.

Anything to the head should be a suspension, so remove low impact. From the above incidents, most would be classed as medium, though off-the-ball incidents should be judged as high at a minimum.

If we judge on the action before worrying about the outcome – suspension, fine or nothing to answer for – then we are more likely to have consistency in suspensions. Greene would probably still get a week, but not more as Dangerfield.

Astbury, Buddy and co. show intent by throwing the elbow back. None was trying to handpass the ball and accidentally made contact with a player trying to tackle them. They knew exactly what they were doing at the time. Throwing the elbow back should be an automatic two weeks if the AFL is serious about ridding the game of such incidents. The impact zone is irrelevant; the result is only relevant after a guilty verdict has been made.

Fines don’t work. The type of incident still crops us. Maybe because it is a paltry amount compared to their income. The only reason fines may work is if they are a minimum of ten per cent of their salary for their contract period. Maybe demerit points can be awarded for fines, and if you were to reach a certain value in a three-year period, you would be suspended for four weeks.

Remember the jumper punch? It was a frequent occurrence, then Tom Hawkins was suspended, and it appears to have stopped. At worst it is less frequent than it once was. It shows that player behaviour can be changed.

The current system asks about intention, severity and location before deciding whether or not a player is guilty of an offence and deciding on a penalty. My proposed system would ask whether the player is guilty first before considering intention and severity.

Remove inherent bias before making a judgement when seeing an incident on the field or seeing the replay. Make sure you look at the incident in real-time, not the slow-motion replay. The action needs to be seen in real-time to see what else could be done instead to avoid it.