JAMIE SOWARD: Turbo factor that ranks him above Hayne and Barba for greatest ever season

Tom Trbojevic will be the Dally M medallist and what he brings to his Manly side is a confidence and an arrogance that their attack can match it with the best of Melbourne and Penrith.

Defensively, he creates an urgency and an enthusiasm, that is infectious throughout the team. When you’ve seen Manly play without him it’s almost like they’ve lost one boot.

He demands excellence. And he’s in a rich vein of form that we probably haven’t ever seen such a sustained period of form like this from a player.

A couple of other dominant seasons by one player come to mind.

I was playing during Jarryd Hayne’s 2009 campaign and he was outrageous to watch. Benny Barber in 2012 is up there as well. 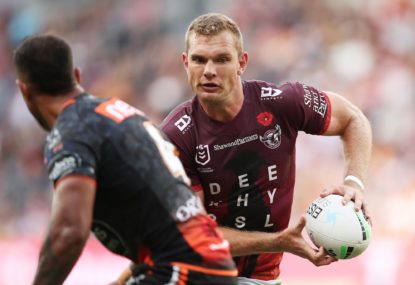 Those two guys were fantastic in those seasons, but I think Tom’s leadership and the way that he affects his teammates, puts him in front. He’s blown up at them and they know that he’s that good that he can do that.

No disrespect to those other two guys, and they won Dally M medals, but I don’t know whether they were leaders within those team, or just great players.

It’s understandable that Turbo is getting a lot of buzz about his place in the game.

I was lucky enough to play in a golden era of the NRL. In Origin I played against a team that had Lockyer, Smith, Thurston, Cronk, Slater and Inglis. It’s hard to remember why we didn’t win that series!

Johnathan Thurston and Cameron Smith are the best I’ve ever played against. Johnathan was a guy that just competed his arse off and never gave you an inch. Cameron was probably the greatest ever player.

I didn’t get to play against Andrew Johns but he’s another. For me it’s about the whole body of work.
Tom’s entering that realm but we’re wanting him to stay injury free. He’s only played 100 games in seven seasons but some of those games have seen him deliver incredible performances.

You judge your fullbacks off a few things: How well they defend, how well they get people in the right position to defend and then obviously the attacking game as well.

He has all that covered. He scrambles. If you had a look that is ‘in the zone’, that’s what Tommy’s had this year.

I’ve never seen him relax on the field and give an inch. He narrows the focus into what he wants. But these are a few big weeks ahead for him. To cement the legacy of this great season, it’s not going to be the Dally M that we judge him on it’s going to be whether he can win a championship.

That campaign starts with a match up against Ryan Papenhuyzen tonight.

While Trbojevic means absolutely everything to his team, Melbourne have the luxury of allowing Papenhuyzen to play his game and inject himself when he needs to.

I think we were all waiting for that performance from him last week. Not only seeing him score tries but just to watch him accelerate through contact and tackles into open space was the thing I was waiting for. He’s a vital piece in that Melbourne Storm spine but he’s not the go to man.

They have a four-headed snake there that can really chip away at you, and within that Papenhuyzen knows his place.

Defensively, he’s good. He scrambles well, and he supports the ball. Both of these fullbacks do that brilliantly and are probably in the two top three or four players in the competition for that.

The key to me in this game is if Manly can go long cycles – by that I mean set for set without making an error – then they’re going to find themselves right in it.

When they played a couple of weeks Melbourne starved the young backrower Haumole Olakau’atu and Josh Schuster of ball in their hands.

If Melbourne come out with a controlled start in the first half and it’s tight, then you’ve got to favour them. They’ve been in that position before and some of the young guys from Manly are still learning.

At the time of writing Cameron Munster is in doubt, and it would change things dramatically if he’s not there. Jahrome Hughes is an elite playmaker who can control the game, but Cameron Munster is one of the top two five-eighths in the world.

If Munster’s out it’s an even game but if he’s in, then it’s Melbourne for me.

I can’t wait for this game. I think it is probably the most anticipated match, first week of the finals, in the last three or four years – that being 1v4 but the team in four being so red hot.

Former NRL player Jamie Soward will be writing for The Roar on the finals series.