Which coach stands to lose (or gain) the most from preliminary final weekend?

On a surface level, we look at the penultimate weekend of the AFL season as simply the process to determine the two teams that will face off for ultimate glory.

Drill further down and there’s a lot more riding on it for individuals.

Simon Goodwin, Chris Scott, Ken Hinkley and Luke Beveridge have led their teams well in 2021, yet this weekend’s footy will tell us if their efforts have been truly successful.

The concept of ‘legacy’ is a strange one, particularly given how fickle and flippant we, as AFL fans, can be when discussing figures in the game. Whether it’s 180 characters or a quick 30-second grab, there’s an innate ability to sum a career up without second thought.

Rightly or wrongly, AFL coaches tend to be judged harshly, and how we view success usually relates to reaching a certain mark, or simply winning.

The underlying theme seems to be that leading a team to a grand final manages to get a coach up to the level of at least being seen as “good”, while a premiership gets you into the history books. Of course, there are outliers in any parameters that are set, but they tend to be driven by recency bias and perhaps the pain of supporter bases one way or the other.

Reaching, yet failing to progress past a preliminary final isn’t held in high regard, perhaps because it isn’t as statistically captivating, nor is it particularly celebratory in nature. Sometimes we forget only one team can win the premiership and in some cases, it’s a monumental effort to reach the final two weeks of the season.

Brad Scott stands out as the most recent example of a coach that is perhaps underrated for his efforts in charge of North Melbourne, and one who might need an opportunity elsewhere to try and solidify his legacy.

Scott coached North Melbourne 203 times, the third-most in club history, and had an overall record of 102 wins and 101 losses. In only one full season did he coach the team to less than ten wins, finishing 15th with six wins in 2017.

Towards the end of his tenure in charge of the Kangaroos, we know that the club was making drastic list management decisions and Scott’s media performances and handling of situations was inconsistent. 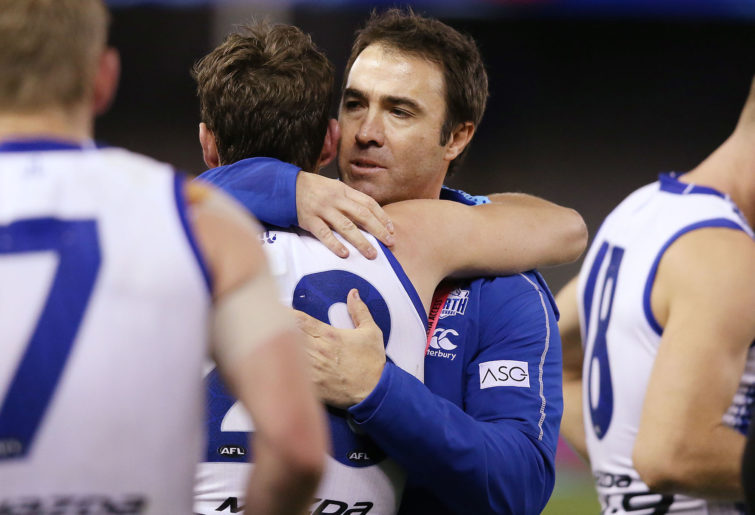 In 2014 and 2015, Scott led North Melbourne to two preliminary finals, once from sixth position and once from eighth position on the ladder. In these two seasons, the Kangaroos were praised for their spirit and ability to get to that spot, despite the failed attempts. Brad Scott isn’t afforded such praise for these efforts when discussed as a coach.

If North Melbourne had made the grand final in either of these seasons, perhaps opinions of Scott would have changed immediately. He may have been given more recognition for his coaching and more trust placed in him when the going got tough.

It certainly would’ve changed the legacy of Brad Scott at the Kangaroos if he went at least one step further but instead, he continues to be maligned.

Ahead of this weekend’s two fixtures, it’s clear that there’s a lot of pressure on Simon Goodwin and Ken Hinkley.

Hinkley has had nine years at Port Adelaide and is yet to reach a grand final, losing the 2014 preliminary final to Hawthorn by three points, and last year to Richmond by a measly goal.

To his credit, he has been able to change things when needed; the way Port Adelaide has played over his time in charge has varied and the personnel he surrounds himself with has too.

It’s a mixed relationship he has had with Power fans as they’ve never finished with less than ten wins in a season under Hinkley, but they’ve never quite looked like world beaters either.

One could argue that this is the highest-pressure situation that has faced the 54-year-old in his coaching career, given all the expectation surrounding the Power in 2021.

They did what they needed to do and earned a home-final when everyone else was failing, and dominated Geelong to earn this preliminary final at home against the Bulldogs.

Finally reaching the grand final would be just reward and let Power fans breathe a little easier, even if a premiership is really what’s needed at this stage of his career.

It’s extremely hard to be in charge of a football club for nearly a decade, not reach the grand final and avoid criticism, though. If it were to eventuate, there’d seemingly be a black mark against Hinkley’s name going forward. Some fans will argue that the team simply must win, otherwise the coach will forever be trapped in mediocrity in the eyes of stakeholders.

For Goodwin, he has been much maligned, largely from his own supporter base. The 2018 preliminary final appearance was followed by 14 wins in the next two years. Such a drop-off warranted criticism and concern.

Leading the Demons to their first minor premiership since their last premiership in 1964 hasn’t exactly wiped the slate clean and given people a fresh opinion on Goodwin, despite the impressiveness of the turnaround.

Any neutral can see that this Melbourne squad looks to be one that can sustain an attack on the flag for the next few years, with the elite talent in the right age bracket and a tactic that allows for a plug-and-play approach, much like Richmond in the past four years.

Yet Melbourne supporters, some of them at least, won’t look at it in that way. Naturally, they’ll be swept up in the emotion of the upcoming game against Geelong, knowing the dream is a couple of steps away.

Goodwin stands to gain a lot if the Demons win this weekend, reaching the grand final in his fifth year of coaching after winning the minor premiership. It’ll show that he has the ability to reach the ‘big dance’ and from that point, anything is possible. No one can take that away from him, his legacy would at least read that he is good enough to turn a team around and reach the final.

Another preliminary final loss, particularly one that has come with such great expectation would be a devastating blow, despite the future looking bright for the club. If Melbourne lose on Friday night, we can already anticipate the reaction and who’ll be in the media’s and supporters’ firing line.

Chris Scott doesn’t exactly escape all of this, even if his legacy is pretty settled. We discussed what it would mean for the Cats to not win the premiership over a month ago, but a fifth preliminary final loss in a decade would be pretty devastating.

Media and supporter narratives dictate that falling short in any sporting context is generally met with ridicule and leaves a bad taste on the memory of those most passionate.

Not for a second is this to suggest Scott could be downgraded from anything other than being a great coach, particularly having won a premiership and owning an astonishing 72 per cent win rate, better than any other Geelong coach in history outside of Cliff Rankin a century ago, in a quarter of the games.

We can sense, though, that another loss this weekend could be used against Scott ever entering the upper echelon. Sometimes we need to look at these things as if the coach were to never be in charge of a club again; one flag and two grand final appearances from ten finals campaigns would bring mixed reviews.

Perhaps the most exempt from this discussion is Luke Beveridge and his Bulldogs. Mid-year, they were a shoo-in to reach this stage of the season. After their last six weeks, we must give Beveridge and his players a heap of credit for making it through the first two finals.

Above all else, Beveridge’s legacy is forever tied to guiding the Bulldogs to their second ever premiership and in the near future, he will become their most successful coach in terms of total wins and finals appearances. Even the most catastrophic of future performances can’t take that away from the 51-year-old, although one suspect it’ll never get that bad for the club.

If anything, he only stands to bolster his legacy with success on Saturday night.

This weekend’s fixtures offer us the four most impressive clubs of 2021 in two fantastic contests that should give us plenty of entertainment and two justified contenders.

Particularly in the current climate, it’s extremely impressive for these four coaches to have rallied the troops and had them playing with great strength and unity for long patches of this season, despite the bedlam that surrounds them in the world.

Reaching a preliminary final is a fantastic achievement, but we know that supporters want a lot more than that.

There’s a lot to lose and a lot to gain this weekend for the fans, the coaches and their legacies.

Good luck to those in charge of Melbourne, Port Adelaide, Geelong and the Western Bulldogs.