You Beaudy beauty: Barrett's moment of magic sums up 'principles of the All Blacks'

After 34 minutes of frustration and lack of cohesion, the All Blacks smashed free of Argentina’s shackles and never looked back, crushing the South Americans 39-0 in their Rugby Championship clash on the Gold Coast on Sunday.

A much-changed All Blacks team from the side that beat Australia a week ago, led 7-0 into the final six minutes of the first half, but then kicked a penalty and crossed for two tries before the break as Argentina’s resistence crumbled.

All Blacks captain Brodie Retallick paid his opponents some kind of tribute, comparing their initial solidity to the space the New Zealanders found against Wallabies over their past three games.

“I think we can be incredibly proud of that performance,” said Retallick. “To keep them at zero defensively, and then we had to really break them down.

“We found a lot of space with the Wallabies in the last few weeks but we had to wear them down at set piece and with our carries. There will be things to work onto keep it a bit tighter, but we’re proud of that.”

From 22-0 at halftime, and All Blacks No.10 Beauden Barrett too hot to handle, Argentina couldn’t find a way back into the contest. Two matches ago, in November 2020, Argentina claimed their only win in 32 Tests against New Zealand. Since then the All Blacks have won 38-0 and now by one point more.

The All Blacks, who swept Australia 3-0 in the Bledisloe Cup this campaign, made six changes from the match last week in Perth and it took a while for them to gel, despite an overwhelming superiority in possession and territory. 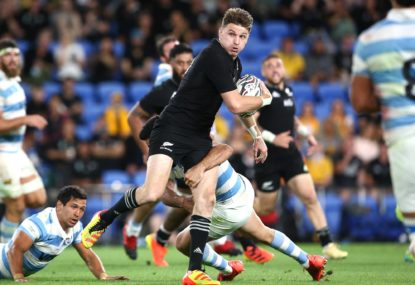 Karl Tu’inukuafe and Asafo Aumua started in the front row, with Luke Jacobsen starting at No.8. George Bower and Codie Taylor dropped out of the side, while Ardie Savea was ruled out due to concussion.

TJ Perenara started at halfback ahead of Brad Weber while George Bridge and Sevu Reece started on the wings.

Jordie Barrett retained his place at fullback after avoiding suspension for the red card last week against Australia, while Anton Lienert-Brown was ruled out just before kickoff, allowing Rieko Ioane to come off the bench into the centres.

And it was Ioane who scored the first try after ten minutes, following some sharp leadup play by Beauden Barrett.

Perenara and Barrett were having their issues as Argentina did well to dig in after the Ioane breakthrough.

“TJ Perenara and Beauden Barrett having a couple of little arguments with each other,” said Wallabies legend Tim Horan on the Stan Sport coverage.

“But it’s a really structured defensive line for Argentina, they’re settled, they’re measured. They’ve got good spacing in the defensive line, they’re not panicking, not rushing up in defence, and are just sitting back and just waiting for New Zealand to see what they’re going to play and picking them off.

“That’s frustrating the 9-10 combination for the All Blacks. We’re so used to seeing Aaron Smith and Richard Mo’unga and TJ hasn’t hasn’t got a lot of options at the moment going forward.”

Beauden Barrett nearly set up a spectacular try for brother Jordie as the All Blacks fullback leapt brilliantly over the defence and only just failed to plant the ball fairly in the in-goal area.

Argentina’s playmaker Nicolas Sanchez, playing a national record 90th Test, had two long penalty attempts that fell short, but while their defence was solid they never threatened in attack, spending just 21 seconds of the first half in the All Blacks defensive 22.

Ex-Wallaby David Campese urged Sanchez to “back himself” more with ball in hand. “He’s got to get the ball free and support. He’s not giving the opportunities to the backs and the wingers,” Campese said.

The All Blacks spurned several penalty shots at goal to push for a try but on 34 minutes they had enough and took an easy three. It seemed to unlock the stern defence.

On 38 minutes Sevu Reece scored for his fourth Test in succession, then came a moment that perfectly sums up the confidence that courses through the All Blacks. With time ticking past the 40 minutes, the All Blacks had a chance to kick for three from near halfway.

Instead Beauden Barrett drove a long kick deep into Argentina’s territory and they made their pressure tell, with Argentina’s Pablo Matera sent to the sin bin and Dalton Papalii crossing for an easy try soon after.

With the result under control, the All Blacks started to play with more flair and freedom after break, and a moment of magic from Beauden Barrett secured their fourth try six minutes into the second half with Matera still off the field.

New Zealand broke from deep in their territory with pace that was too hot for Argentina to handle. Barrett surged into space in the 22 and then threw an audacious pass out of the back of his hand that flew like a bullet to give No.8 Luke Jacobson a stroll to the tryline.

“What a great piece of skill and what a great example of what makes this All Blacks side so great,” said former Wallaby Justin Harrison on Stan Sport.

“They changed the pace of the game but playing at speed doesn’t mean playing without control.

“Every part of what we just saw was part of the principles of the All Blacks – get a half opportunity to get your shoulders through a gap, flatten up, expose space, don’t shift pressure, give the ball to your teammate in a better position than when you got it. All of the things that make this All Black side wonderful to watch.”

If Jacobson’s first try was a perfect example of the All Blacks fleet footed attack, his second, 11 minutes from the end showcased another of their strengths, a powerful pack making the most of sustained pressure and the No.8 peeling off the back of the scrum.

Harrison added: “There was so much about the All Blacks that we’ve come to expect on display tonight – cynical and ruthless in their approach, finding it difficult to get some momentum but making sure that they’re always asking questions of the opposition.

“The Argentinian side would have come into this Test match, backing their capacity to be disciplined in defence and match the physicality of this All Blacks side.

“They were just too good man-for-man, bble to stick to the principles of play that we know are the blueprint of an All Blacks jersey – expose the frailty of a one-on-one, make sure that your attention to detail is paramount.”

Welcome to Rugby World, a new weekly column looking at issues and stories from home and abroad. Sonny shining Sonny Bill Williams is everywhere right now. A permanent fixture of Stan Sport’s post-match punditry, he didn’t awlays sparkle, but did deliver the best interview moment of The Rugby Championship with that heart-felt exchange with Quade […]

RSA’s participation in The Rugby Championship renewed the meaning and opportunity of a question that still alters the dream of coaches: how to play superior rugby and not die trying?

The Wrap: Why Sam Cane and Kieran Read are poles apart and why it matters

On Saturday, All Black captain Sam Cane made his debut appearance for King Country, in the lower depths of New Zealand Rugby’s Heartland Championship, playing 57 minutes in their 13-48 loss to Whanganui.

The Wrap: Why Sam Cane and Kieran Read are poles apart and why it matters