The 30-year-old Melburnian looked close to tears as he admitted, after his emphatic 7-5 6-2 triumph over Dutch teenager Niels Vink in the US Open quad singles final on Sunday, that this could have been his farewell to Flushing Meadows.

If it is the last time the New York slam sees this remarkable Australian entertainer in action, Alcott was happy to leave them with a typically effervescent farewell.

“Thanks for making the dreams of a young fat disabled kid with a really bad haircut come true because I cant believe I just did it!” he told the Louis Armstrong Stadium crowd.

“I just cant believe I just won the golden slam!”

Then he was off to the Arthur Ashe Stadium to watch the men’s singles final between Daniil Medvedev and Novak Djokovic, opening a can of beer for the cameras, pouring it into his trophy, chugging it all down and then plonking the upside-down Cup on his head.

Cue cheers all round from the Flushing Meadow crowds who had earlier watched him produce a vintage display to outclass the 18-year-old Vink, the sport’s new rising star who had pushed Alcott to three sets in a classic at the Paralympics.

This time, the only real worry seemed to come at the start for Alcott, as he waited anxiously for his match wheelchair to be brought to the court. 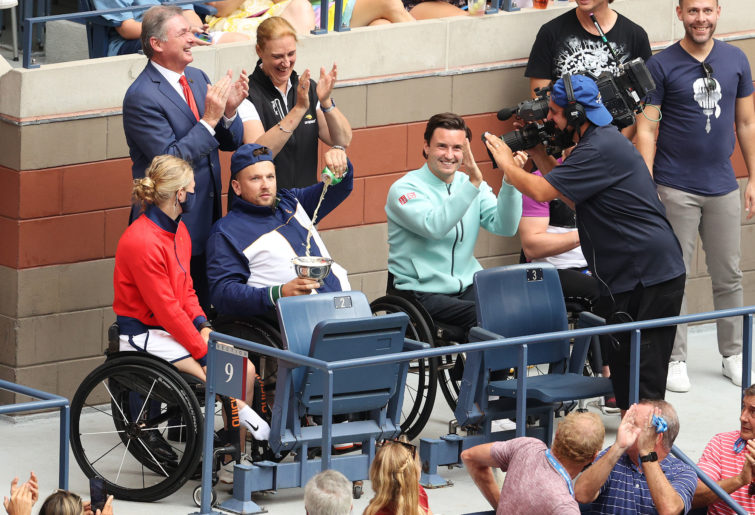 Dylan Alcott celebrates completing the ‘Golden Slam’ with victory in the US Open final. (Photo by Elsa/Getty Images)

At the end of an uneven first set in which serve was broken seven times, Alcott produced his best tennis, racing to retrieve a net cord and then somehow finding a dazzling lob to win the set 7-5 with his 17th winner of the stanza.

From there, he was in complete control, taking victory in an hour and a quarter after adding another 11 winners.

After praising Vink for pushing him to a new level, Alcott told the crowd: “I used to hate myself so much, I hated my disability, I didnt even want to be here any more and then I found tennis and it changed and saved my life.

“And now I’m the only male in any form of tennis to win the golden slam, which is pretty cool.”

Alcott has won 20 of his 21 matches this season and a 15th singles grand slam but is considering his future after achieving something unsurpassable.

Earlier on Sunday, Dutchwoman Diede de Groot, the top seed, achieved the ‘golden slam’ in the women’s wheelchair singles, beating Japan’s Yui Kamiji 6-3 6-2 in a rematch of their gold medal encounter at the Tokyo Paralympics.