The NRL’s call to play Melbourne’s week-one final on their Sunshine Coast base has left them with a near-impossible task of the Storm taking on the AFL grand final for Victorian viewers in a fortnight.

The NRL set themselves the tall order on Sunday night, confirming Melbourne’s preliminary final against Penrith or Parramatta would fall on September 25.

That night also coincides with the AFL’s decider in Perth, with the NRL kick off coming just 35 minutes after the first bounce on the Seven Network.

Making matters more difficult for the NRL, the AFL decider is between two Melbourne teams in Western Bulldogs and the Demons.

While the AFL grand final is traditionally an afternoon affair at the MCG, the 2021 decider is being played in Perth due to COVID-19 and starts at 5:15pm local time, meaning it will be in evening prime time on the east coast.

The Demons in particular are a fairytale story, pursuing their first flag in 57 years.

The NRL were essentially forced into clashing the Storm with the AFL match after Melbourne beat Manly in Week 1 of the finals. 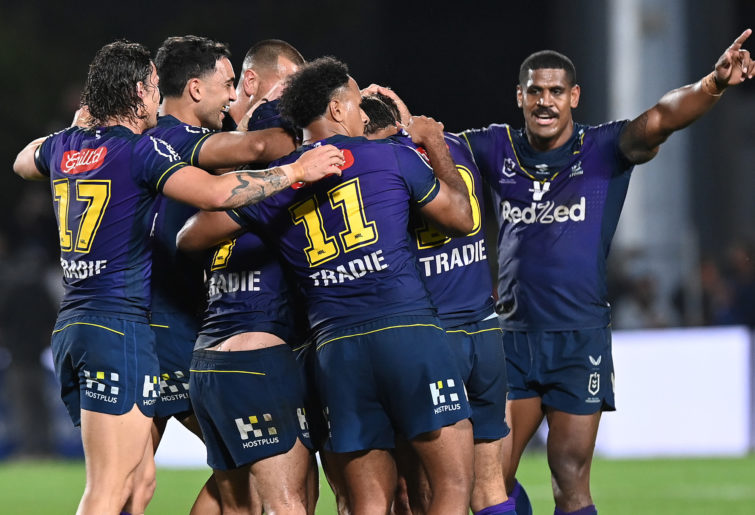 Under the NRL’s finals system, the league offers seven-day turnarounds for the winners of games in Week 2 before their preliminary finals.

Given the order of games in Week 1, Manly and the Roosters had to be played on Friday night in Week 2 and Penrith-Parramatta on Saturday.

The only way to avoid that scheduling would have been to reverse the order of games in Week 1, with Melbourne-Manly on Saturday and Penrith-South Sydney on Friday.

Parramatta and Newcastle would also have had to have been played on Saturday night, with the Roosters and Gold Coast on the Sunday.

But it’s believed the NRL wanted to reward minor premiers Melbourne with the ability to play at their home away from home on the Sunshine Coast.

Given a double-header had already been booked in for Townsville on the Saturday, the only way for the Storm to play at Sunshine Coast Stadium was by playing them on the Friday night.

Likewise, the league could have opted to play the preliminary final in an afternoon time slot on the Saturday to avoid a clash.

But they have instead decided to take it head on, risking a hit to their own ratings in the process.

Fox League’s numbers in Melbourne for the Storm’s preliminary final are unavailable, but it did rate 333,000 nationally.