Citizen Quade: 'To not know if I could come home was a daunting feeling,' says 'grateful' star

Wallabies star Quade Cooper’s bid for Australian citizenship appears to be a fait accompli after his Rugby Championship heorics brought his plight into sharp focus, while it emerged his close friend and former Australia teammate Will Genia was in the same situation.

Cooper has been constantly asked about his failed attempts to gain citizenship during his return to the Wallabies set up. While it’s become a running joke in some quarters, Cooper clearly hasn’t seen the funny side of it, as his awkward exchange with Stan Sport’s Nick McArdle on Sunday night clearly highlighted.

Cooper’s stress came because he was living and working in Japan during COVID, which has caused myriad issues around international travel into Australia, where his family lives.

“We’ve got the situation around the world with COVID and people not being able come and go as they please from their home countries,” Cooper said.

“This is a place my family and I’ve lived for over 20 years. So to not know if I was going to be able to come back to my home, or come back and see my family, that was quite a daunting feeling when you’re living in Japan. That for me was the main reason of applying for my citizenship.”

Immigration Minister Alex Hawke acknowledged on Tuesday that residency requirements were preventing exceptional people from becoming Australians, after pressure from US born Australian senator Kristina Keneally, whom Cooper thanked Tuesday along with “the Australian public, my teammates our coaches.

“Probably without playing that game, it might not have been able to come to fruition.”

Cooper, who was born in New Zealand and Genia, who was born in Papua New Guinea, have found it tough to satisfy requirements because of the constant overseas travel they say are required to represent Australia and Super Rugby teams.

Genia, who writes for The Roar, declined to comment on his situation when asked about it on Monday. It’s understood the situation is frustrating for the proud ex-Wallabies ace.

Cooper said he has been knocked back for Australian citizenship four times because his touring schedule and two years spent playing in Japan meant he had not met residency requirements. 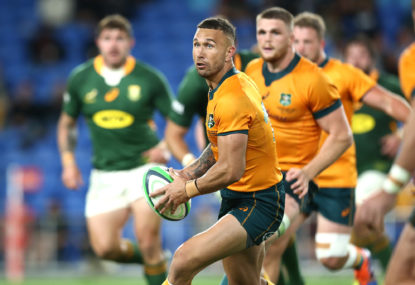 The rules, which are set to change, say an aspiring Australian citizen cannot be absent from Australia for more than 12 months in the four years prior to lodging their application.

On Tuesday morning, Immigration Minister Alex Hawke said in a statement: “The unique work and travel demands on some of our most highly distinguished prospective Australians should not preclude them from making the cut.

“That’s why I have directed the Department of Home Affairs to apply greater flexibility in applying the residence requirement for eligible people.

“Exceptional people must not be prevented from becoming Australians because of the unique demands of the very work they do that makes them exceptional.”

He acknowleged Genia’s claims adding: “I’m sure there’s going to be another pool coming through.”

“This just recognises, not only just for rugby but for all sports, if you play for this country I think you deserve to get citizenship,” said McLennan.

Cooper said there still appeared to be some steps to work through, and was unsure of the timing.

“I literally just walked out of the gym and I had a few messages on my phone, there a still a couple of hundred messages that haven’t had the opportunity to go through but I only just saw the news,” he told reporters.

“I haven’t really had any opportunity to filter through that and and see what what the next steps are from here about probably have conversations in and around that at some point today.”

Cooper, though, said the official recognition would do little to change his feelings about representing Australia.

“I’ve said it all along that there is more to being an Australian than just a piece of paper,” Cooper said.

“I don’t think I’ll feel any different. I’ll be truly grateful to have that sorted. The things that I can control is how I am each day, the example I set between these four walls to my teammates, to the coaches and anybody aspiring to represent Australia in the future.”