Dawson has yet to publicly declare whether the Crows or Port Adelaide is his preferred destination, although if rumours are to be believed, the defender turned winger is wanting to call Alberton home.

Having played 64 games in the red and white, Dawson produced his best season to date, finishing third in Sydney’s best and fairest. After using pick 56 in the 2015 national draft on Dawson, the Swans will be looking for a more than adequate return on their investment into the first six seasons of the 24-year-old’s league career.

So, with that said, below are five trade scenarios, from most likely to least likely, to facilitate Dawson’s request.

Full disclosure: I am a Sydney supporter and while there may be an element of natural bias, I aim to keep as objective and balanced as possible with these scenarios. 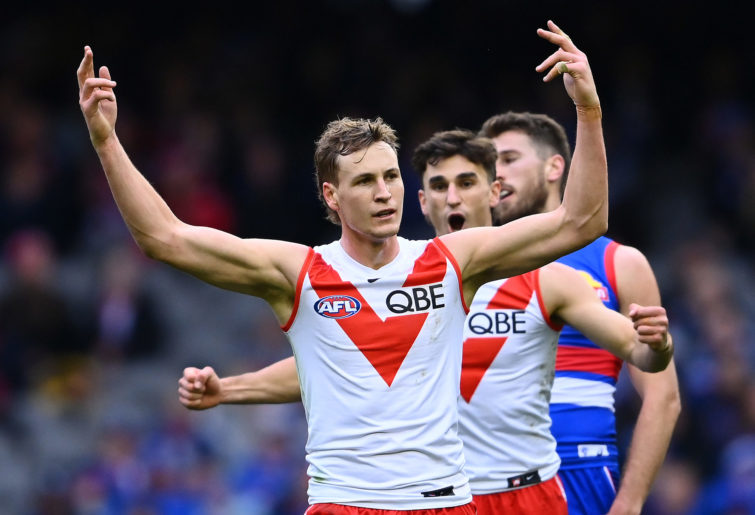 With at least two confirmed (and possibly more) father-son and next generation academy bids in the first round of drafting, this pick will end up being anywhere between 18 and 22.

Even after their upset preliminary final loss, Port Adelaide are still in ‘win now’ mode and will be interested in immediate improvement to their playing list.

With Tom Rockliff’s retirement, along with the speculation Hamish Hartlett will be moved on and existing salary cap flexibility, the pieces for this pretty straightforward deal seem to be in place.

Except there is one hitch.

Port Adelaide don’t have another selection in this year’s draft until the fourth round, with West Coast and Essendon in possession of their second- and third-round picks respectively.

This may cause the Power to be a little gun shy in offering it up, however, given their premiership ambitions, this deal may out-reward the risk.

2. The Adelaide Crows receive Jordan Dawson and the Sydney Swans receive Adelaide’s 2021 second-round draft pick (currently pick 23)
While it is rumoured Dawson will nominate Port Adelaide, his intention is to return to South Australia, which means the Crows will definitely believe they are in the mix for his signature.

Adelaide is rumoured to be very keen on Dawson, with his age and experience fitting their overall list profile as they build towards a return to finals football over the next few seasons.

Adelaide is also armed with a supposed war chest within their salary cap and could offer Dawson an offer he simply could not refuse.

The Swans will start the bidding with Adelaide’s first-round pick (currently pick four), but there is a snowball’s chance in hell the Crows will part with that in a deal for Dawson.

Former Collingwood recruiting manager turned SEN list analyst Matt Rendell believes pick 23 for Dawson will be the most overall attractive offer the Swans will receive, all depending on whether Dawson is willing to move to West Lakes.

3. Port Adelaide receive Jordan Dawson and the Sydney Swans receive Peter Ladhams
Split Enz claimed history never repeats, however, it would be very surprising if it didn’t in Sydney’s negotiations with Port.

When orchestrating the deal for Aliir Aliir last off-season, Peter Ladhams’ name was bandied as the trade chip in the Swans’ search to bolster their ruck stocks.

Although Sydney was able to successfully acquire a ruckman, they will still be in the market. While Tom Hickey had a career-best season in his first in the Harbour City, he is the on the wrong side of 30, as is Callum Sinclair.

With the highly touted yet-to-debut Sam Hayes waiting in the wings at Port and Ladhams behind Charlie Dixon, Mitch Georgiades and Todd Marshall to play a key forward role, Ladhams may be able to be coaxed by the Swans with ruck opportunities while also a more competitive key forward pool behind Lance Franklin.

4. Port Adelaide receive Jordan Dawson and the Sydney Swans receive Todd Marshall
If Dawson is being lured back to his home state, the Swans may just try and do the same with young key forward Marshall.

Although Marshall is a rumoured favourite of Port Adelaide coach Ken Hinkley, the NSW product hasn’t quite yet cemented himself in Port’s forward 50. 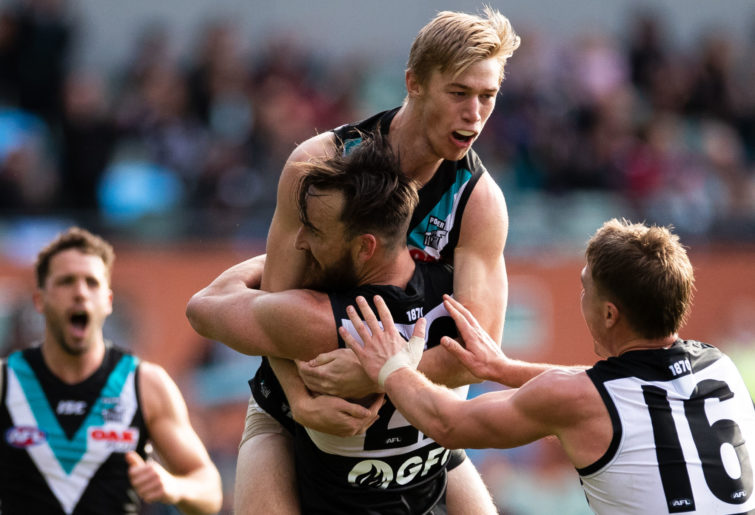 With Dixon, Georgiades, Robbie Gray, Connor Rozee and Orazio Fantasia seemingly being locks if healthy, Marshall finds himself in a constant battle with the above mentioned Ladhams, fringe forwards Steven Motlop and Boyd Woodcock, and key forward prospect Ollie Lord for a spot in Port’s forward brigade.

Quite similarly to Ladhams, the Swans could offer Marshall more secure opportunities to play a prominent role, especially with the impending end to Franklin’s mega contract and possibly career, while also dangling the go-home factor in a rare opportunity for the club.

5. The Adelaide Crows receive Jordan Dawson via the pre-season draft and the Sydney Swans receive nothing
This scenario is definitely the least likely, although if Dawson is hell bent on a return to South Australia and the parties involved end up in a deadlock, this would not be the first time a club has failed to facilitate a return on their investment.

You only have to look at the last two trade periods, with Jack Martin’s move to Carlton and Jackson Hately’s move to the Crows to see players will ultimately end up where they want to be.

If the Swans’ asking price is exorbitant (such as the top-ten pick Gold Coast wanted for Martin), Sydney could be left with nothing to show for a talented youngster and on the flip side, if the only plausible route back to South Australia is with the Crows, they may chance their hand as they did with Hately, which would be an almighty coup.

Although the season hasn’t even finished yet as we await what looks to be a cracking grand final between Melbourne and the Western Bulldogs, and these are just hypothetical dealings, this Dawson deal will be one of the most talked-about and debated deals of the off-season.