“The challenge of every team is to build a feeling of oneness, of dependence on one another – because the question is not usually how well each person performs, but how well they work together…

“Teamwork is what the Green Bay Packers were all about. They didn’t do it for individual glory. They did it because they loved one another.”

Those are the words of iconic National Football League coach Vince Lombardi, and they ring as true today as they did more than 60 years ago.

The greatest single puzzle in team sport remains the same as it always was: how the collective can become greater than the sum of its individual parts. In truth, it is a mystery never solved. The best learn to read the runes a little earlier, and a little quicker than everyone else.

The two players who may well be battling for the right to wear the Wallabies number 10 jersey for remainder of 2021, Quade Cooper and James O’Connor, had little feeling for that oneness and sense of dependence Lombardi describes at the start of their careers.

They were the prodigal sons of Australian rugby: talented individualists pumped full of celebrity like a drug. Their public profiles were bigger than any team they played for, or any coach they worked under, even bigger than the game itself. The imagery at least, was ‘too big to fail’.

Now the two prodigals have returned home to claim their inheritance as men – both a little smaller, and wiser for journeys that have taken them as far afield as the foreboding dark clouds of Manchester, and the unending blueness of the Côte d’Azur. They have understood what it meant. They have seen sunshine and rain at once.

When the Australian players gathered arm-in-arm in the changing sheds before the game ever started, their heads were all tilted in the same direction, listening to a voice from out of camera shot. The voice belonged to Quade Cooper. It did not matter that he could not be seen, because he could be heard clearly enough by those around him.

After a match in which Cooper had kicked eight out of eight goals to contribute mightily to Australia’s 28-26 victory over the World Champion Springboks, the man of the moment said:

“I only just had the legs to get it over. I looked at it and had a little chat to myself and said ‘is this your ego saying you want to take the kick? Or what’s going to benefit the team?’

“I looked over and had a little chat to ‘Hodgy’ (Reece Hodge). He backed me. If your peers are backing you, you’ve got to back yourself. We put a lot of work into these sorts of things.

“It’s not necessarily about the kick itself but staying on the grind every day. The challenge is when you’re at a high, to be able to maintain and not get ahead of yourself. Appreciate it for what it’s worth. It was one of the great all-time Test matches I’ve played in.”

Those are the words of a man who has taken his share of knocks as an individual, and learned the value of mutual support and team-ship the hard way.

Wallabies head coach Dave Rennie was in no doubt about Quade’s contribution to the win afterwards.

IT HAD TO BE HIM ???? Quade Cooper knocks over the match winning penalty.

“He was close to starting the week before [versus the All Blacks]. He’s come in, he’s contributed massively – to discussions, to training. Based on form it was hard to leave him out. I thought he was massive tonight,” Rennie said.

“We didn’t want to overplay against a team that doesn’t want to keep the ball. We were prepared to kick the ball back, and he had a big part to play in that.

“He’s got his detail down and was able to implement under pressure against the world champions. It was one hell of an effort…

“We were smart, we kicked appropriately, we played a fair bit of territory and got rewarded at the right end of the field.”

As the Australian captain Michael Hooper added in the post-game press conference, in the clutch Cooper was “calm and making good decisions around game-calling. When the ebbs and flows of the game came, he was a really good person to call on and give us a bit of direction.”

In other words, Cooper was a real team player, and a leader for the Wallabies.

Rennie’s gameplan had to be fireproof, and able to withstand ‘initial contact with the enemy’, not to fall apart in the face of the physical heat the world champions were always going to bring.

At the beginning of the series against the British and Irish Lions, South Africa’s defensive leader Lukhanyo Am had made a definitive statement about what was going to happen if the Lions decided to move the ball wide.

There was no chance of that happening with Quade starting at number 10 for the Wallabies, and his individual chess-match with Am was one for the connoisseurs.

Am gets to stick Cooper, but he is a step late and the ball has already left the outside-half’s hands. Quade’s ability to alter the depth of his positioning, which I explored in this article, preserves the width of the field for the Australian attack. 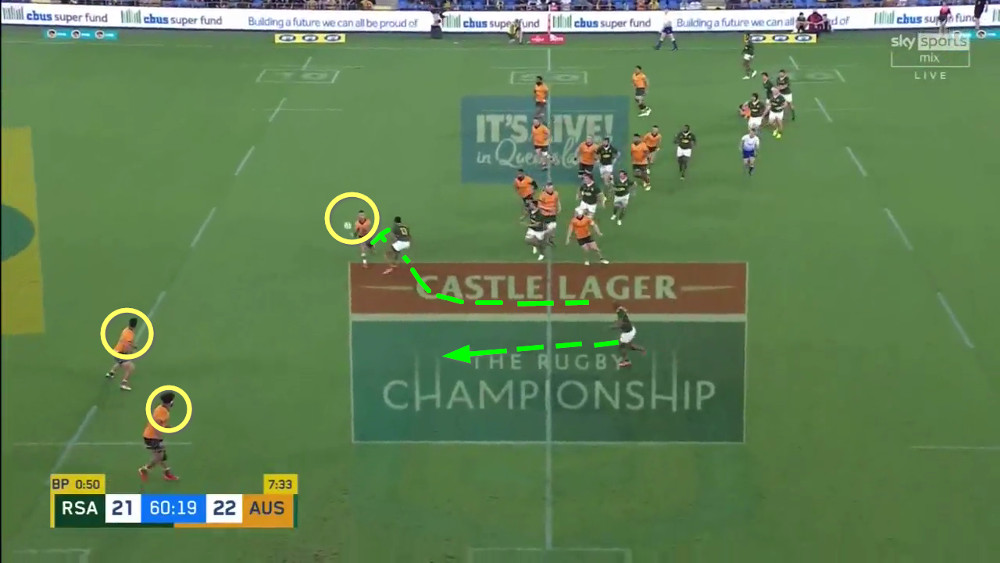 It became a feature of the game.

Am rushes but Cooper is deep enough to release the ball in a promising situation for Kerevi outside him. 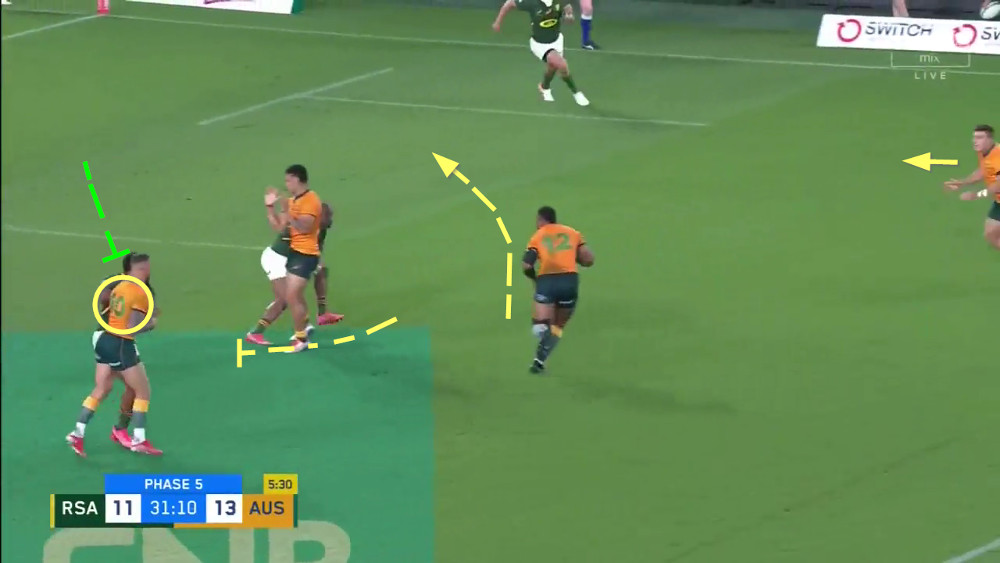 Cooper’s fine sense of positional play on attack was also key to the Wallabies go-ahead score in the first half.

Quade is rushed by Eben Etzebeth, but the big Springbok second row is again one step too late. A beautifully weighted ‘six o’clock pass’ takes Am out of the equation and gives Kerevi a free run at the weaker defender (Faf de Klerk) outside him. Andrew Kellaway does the rest, cutting back inside the cover to finish a well-conceived try.

The subtle differences in positioning can be seen in a comparison of one of the stills from the previous article. 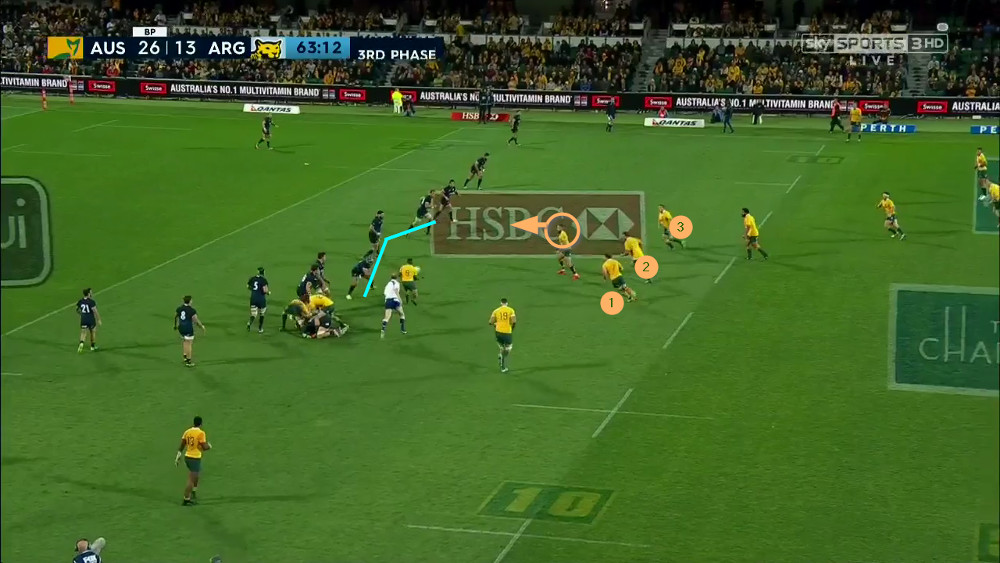 … with another from the situation before Cooper receives the pass against the Boks. 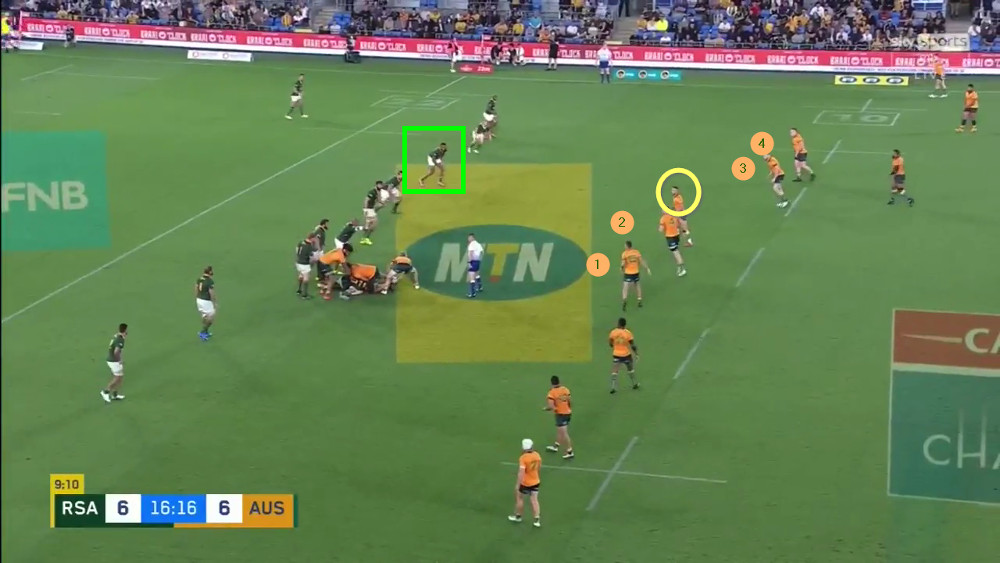 Quade has dropped off a couple of metres, back towards his own forwards, in order to account for the extra line-speed from the South African defence. Sometimes you have to go backwards in order to go forward again, and the extra depth creates more width for the attack.

As Rennie suggested in his post-match comments, with Cooper at number 10 Australia were able to use the kicking game to their advantage and turn the Springbok defence around.

The chip kick would typically be covered by the defensive number 13, but because Am is playing so high upfield, responsibility devolves to the two-man backfield of Handré Pollard and Willie le Roux, who are much more prone to make mistakes in deep defence. The ball duly goes loose and Australia wins a turnover penalty.

When Nic White came off the bench to play the whole of the second half instead of Tate McDermott, the kicking game assumed proportionately greater importance for the Wallabies.

Cooper puts Kerevi through the seam underneath Am neatly, and White kicks the first 50/22 of the competition to regain a lineout throw in the Springbok 22.

Later in the half, the roles were reversed.

On the first phase, White is able to put up a box kick that is far more accurate than anything McDermott was able to manage in the first period. When Jasper Wiese misses the receipt and Australia gets the ball back, it’s Quade’s turn. He slides a long diagonal into the backfield space behind Makazole Mapimpi and draws another backfield error out of Pollard.

Once again, it is a very handy way of leaving South Africa’s most aggressive defender (Am) high and dry, and as far from the scene of the action as possible. 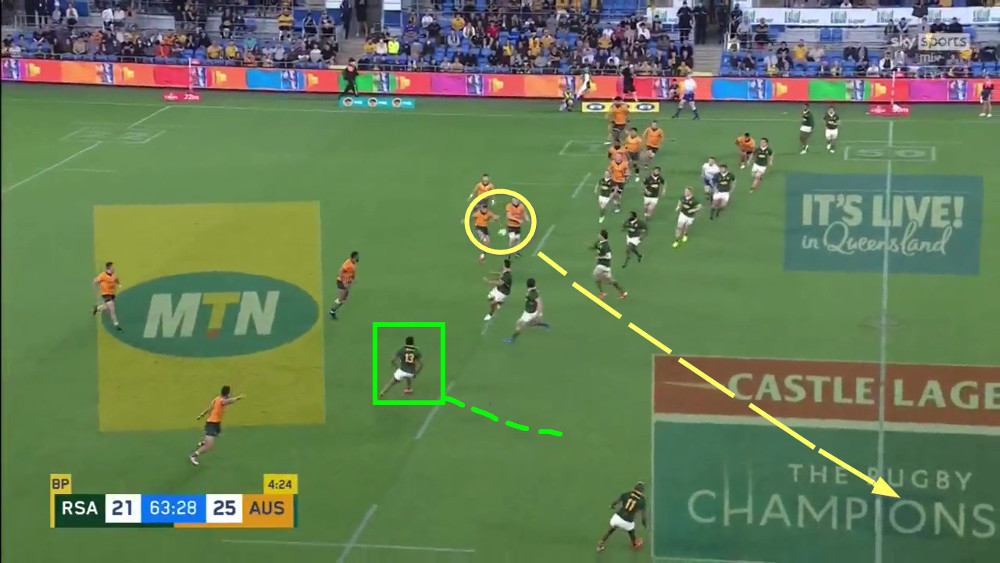 The final chapter of the game was another version of the Quade and Whitey show, with the scrumhalf winning turnover from a dominant Australian scrum, and his partner in crime nervelessly slotting the game-winning goal.

Speaking as an individual in a very singular sport, the American tennis great Chris Evert knew that “team sports probably teach you more about giving – about being unselfish and being flexible.”

It is this sense of selflessness and adaptability that both Quade Cooper and James O’Connor have been able to bring back to Australian shores with them in the latter stage of their careers. Quade questioned himself before taking on that final kick, and waited to feel Lombardi’s sense of ‘oneness and dependence’ before stepping up to the plate.

“He [Reece Hodge] backed me. If your peers are backing you, you’ve got to back yourself. We put a lot of work into these sorts of things.”

The mindset was right, and the kick went over the black dot, only when the desire for individual glory had subsided.

It has taken both Cooper and O’Connor a long time to reach a happy place in their rugby careers. Now that it is back, Australian rugby can only reap the benefits.

The win against the world champions showed how well Australian rugby teams can work together when they have true leadership and direction – whether it is Quade doing the talking out of shot, or Nic White leading the deep-breathing exercises.

Now for the next challenge: “when you’re at a high, to be able to maintain and not get ahead of yourself. Appreciate it for what it’s worth.”