In his press conference ahead of his record-breaking 60th Test match as captain of Australia on Friday, 29-year-old Michael Hooper referred to 25-year-old Andrew Kellaway as “a kid”.

Hooper didn’t mean it to belittle the man. It was more that in terms of Test rugby, Kellaway’s six Test matches placed him well into the rookie category.

Yet Kellaway has been around the block. And if his comments in the official Rugby Championship Test match program are anything to go by, he’s not backward in coming forward.

Asked about the so-called ‘Giteau Law’ that places restrictions on which Australians can play for Australia, Kellaway says “the law’s got to be scrapped”.

“If you’re Australian you should be able to play for Australia. That’s regardless of where you’re playing in the world.

“The game’s changing, the world’s changing. If we don’t change with it, we’re going to find ourselves far worse off than we are now.” 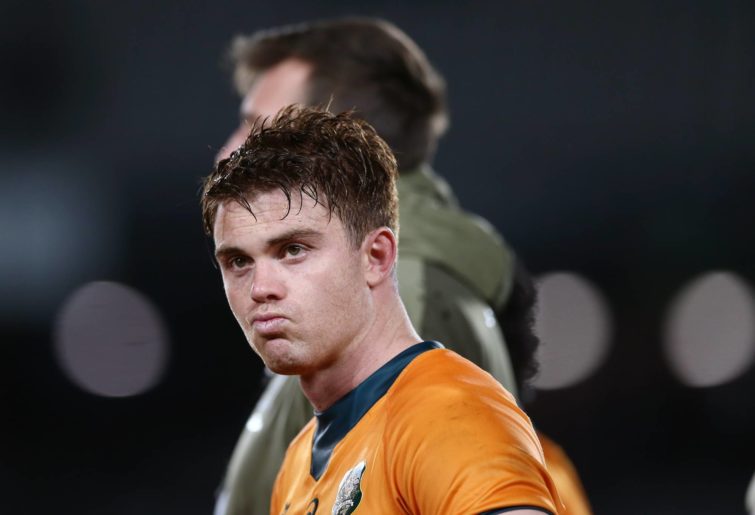 Kellaway points to his former team, NSW Waratahs, who didn’t win a game in 2021. He worries that the Wallabies could look like that one day.

“At some stage we have to sit down and ask is it about winning or about nurturing the future,” he says.

“If it’s the latter, I would be extremely worried. The Wallabies might look like the Waratahs [did] this year.

“And unfortunately for those guys, it must’ve been a horrendous year to have to sit through that. None of them are to blame, it’s the people who thought it was okay to run what was essentially an academy side out of a professional team.

“That’s probably not a popular opinion and a little bit heavy.

“But I think it’s an absolute no brainer.”

The man is uniquely placed to comment. His rugby journey’s taken him from Gladesville to Randwick to Armidale to Northampton to Pukekohe to Melbourne to Abiko in the Chiba Prefecture east of Tokyo, and back to Melbourne.

His plan out of school was to play for NSW – which he achieved – and then the Wallabies, which took longer. 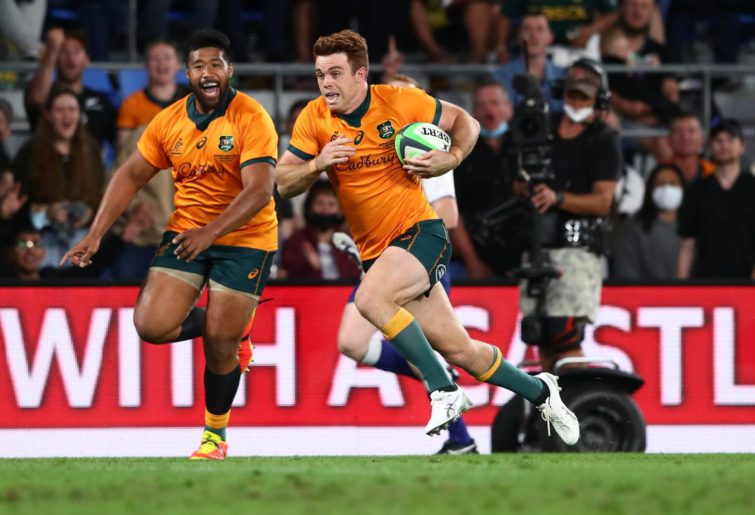 After that he assumed it’d be take the cash in France. He thought that’s just how rugby careers happened.

What happened to Kellaway was injury. Followed by the sad but sure realisation that he was on the outer at the Tahs. He signed with Northampton. It was the making of him.

“It was such a weird time in my life, leaving the Tahs and feeling really unfulfilled, there was no closure. I thought I had more to offer and I went to Saints, not ‘reluctantly’ but not super positive about footy either,” he says.

“I was 21, 22, away from home for the first time in this little town in the Midlands and wasn’t really that pumped about it.

“I was in a strange place but the people allowed me to be me and be comfortable being me. And it taught me about footy on the way, too.

“I still say now I’d drop everything and go back in a heartbeat.”

Kellaway’s biggest takeaway from Northampton was perspective. At the Waratahs he’d “stubbornly” and “arrogantly” fought against being a utility back. He wanted to play fullback.

At Saints he filled in at centre for injured Rob Horne before playing wing, fullback, wing and centre again.

“Northampton taught me that it doesn’t matter where you playing as long as you’re playing,” Kellaway says.

“I’d have played maybe 30 games either bench or starting and while I can’t say I played the best footy of my career, jeez I loved it. I was genuinely happy, is the best way to put it.”

Then a phone call begat a huge call. Melbourne Rebels had an opening though the money was a quarter what he was on. It was less even than his contract out of school with NSW. He took it anyway. 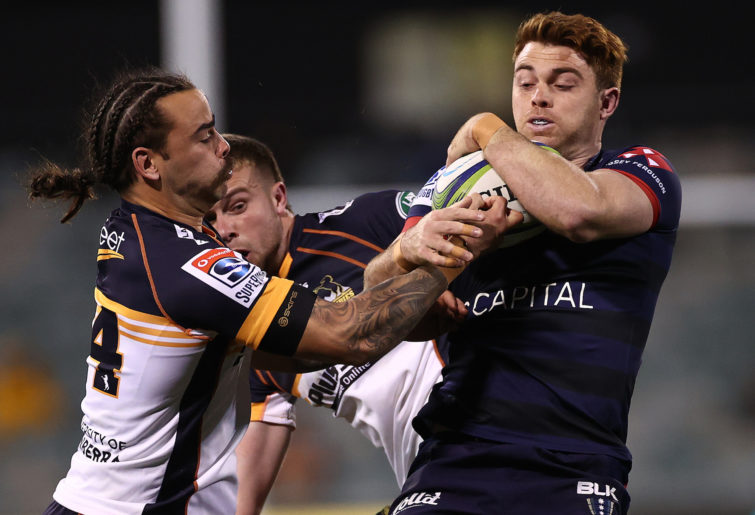 On the way home he picked up a ten week contract with Counties Manukau playing fullback. There followed a few good games for Melbourne Rebels when COVID struck. There followed an offer from NEC Green Hornets in Japan, money that was “too good to turn down”.

The Rebels were good about it. They appreciated that he’d taken the haircut to come home. Told him he’d earned it. Just come back to us as you left.

And then they picked for him Australia.

And here he is, a 25-year-old man who says he doesn’t want to be an “example” to his fellow professionals. But he would like to be a “reminder” of what’s possible. That no two journeys need be the same.

“Hopefully with coming home and giving it a nudge, it’s a reminder to guys that it’s still an option if you’re willing to make a choice and do what’s necessary. It wasn’t easy to accept 25 per cent of the deal that I was on in England. That’s a tough thing to do. You talk about life after footy, that probably set me back.

“But then I look at where I am now and that choice was instrumental in putting me in this position. And I wouldn’t change it for the world.”

Kellaway acknowledges his decision wouldn’t work for everyone. That the money in Europe and Japan can be just too enticing for some men and their families. 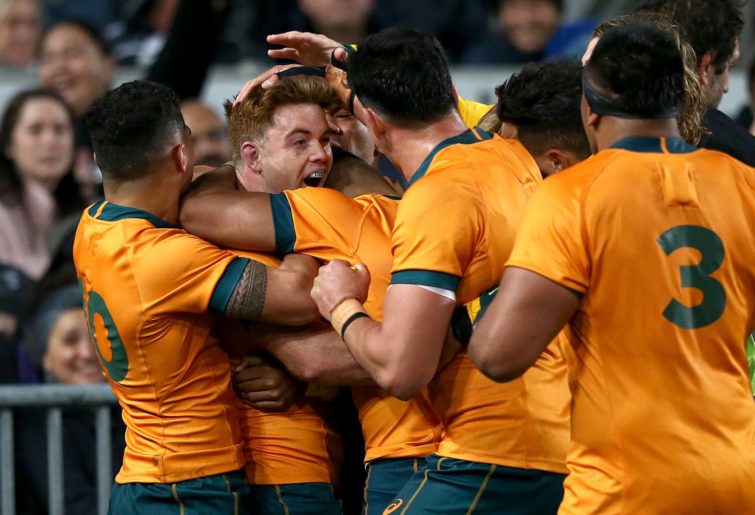 “We’re not stupid, it’s not always possible because of the nature of the game and the way things are in our country,” he says.

“But we do want as many guys playing in Australia as possible. And guys might see me and think, ‘He was shit when I played against him, if he can do it so can I!’.”

“You laugh but there’s so many guys overseas who could be playing for Australia,” he says.

“And there could come a time when we’ll see them playing for Japan. In another life they’d be playing for Australia.”

But wouldn’t our local franchises and greater competition struggle if the best players were in Europe, Japan or the USA?

Kellaway acknowledges that “guys will slip through the cracks” should the law be removed. Yet he argues it’s happening anyway. And that Australian rugby is the worse for it.

“I hear the argument about Super Rugby dying if we let guys come and go. But, to be perfectly honest, I don’t really buy it,” he says.

“If it were the case that any Australian at any stage of their career could just leave and go to another team, easily… it isn’t that easy.

“There aren’t infinite amount of spots for Australians to play rugby and vanish into good teams. It just doesn’t happen that way… I don’t buy it.”

As Hooper told reporters, Kellaway will “question things if he thinks they can be done better”.

“But he’s open to learning as well.

“The kid’s had potential and I say ‘kid’ because he’s still pretty young although it feels like he’s been around for ages.

“We’re starting to see him really grow now and it’s fantastic for him.”

For Australian rugby, too.

All power to him.