A Tom Trbojevic-inspired Manly Sea Eagles have thumped the Sydney Roosters in Mackay to march into their first NRL preliminary final since 2013.

The Sea Eagles’ superstar fullback fired back after his quiet night last week against Melbourne, scoring two tries and setting up another as Manly claimed a comprehensive 42-6 semi-final win over the Roosters.

The victory means Manly move on to face South Sydney next Friday in Brisbane in a grand final qualifier with their two-time premiership-winning coach Des Hasler up against seven-time grand final victor Wayne Bennett.

Trbojevic took just six minutes to make his impact on the game, crossing over on the first play after winning his team a penalty for a late hit from Matt Ikuvalu for which the Roosters’ winger was placed on report.

When Trbojevic combined with his brother Jake just five minutes later before sending five-eighth Kieran Foran into a wide-open gap, the Sea Eagles had bolted to a 12-0 lead.

Hometown product Daly Cherry-Evans was also having a night out at BB Print Stadium, the north Queensland town hosting the first final in its history.

Cherry-Evans scored Manly’s third try, busting through some weak Roosters defence with a left-foot step after a scrum, and had a key role in Manly’s fourth try with a bullet pass sending Jason Saab free down the right before the winger passed inside to allow centre Morgan Harper to score.

The Roosters, who committed five errors in a sloppy first-half, only had an Ikuvalu try and an Adam Keighran penalty conversion after the halftime siren to show for their efforts at the break.

Their sloppiness didn’t stop in the second half with Trbojevic and then Dylan Walker extending the Sea Eagles’ lead.

The victory was sealed when Saab sprinted 80 metres on the back of another Roosters’ handling error, taking time to showboat with his teammates on the sideline before scoring.

Such was the ease of Manly’s win, Trbojevic was already off the field at that stage, having been given an early mark by Hasler.

Trent Robinson’s injury-hit team, playing without suspended hooker Sam Verrills, ended the game with a completion rate of 68 per cent in a disappointing end to their campaign.

The game marked the 325th and final appearance of veteran Roosters centre Josh Morris’s career as he joins twin brother Brett in retirement. 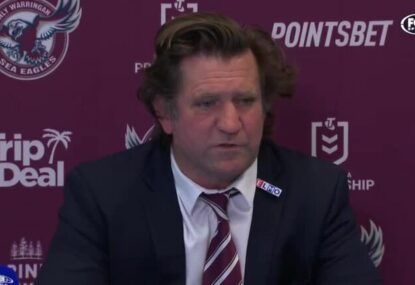 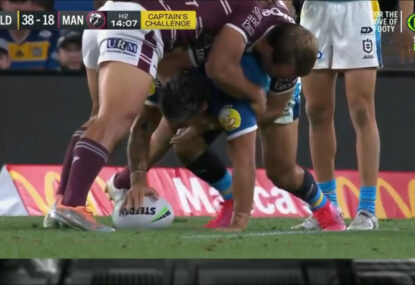 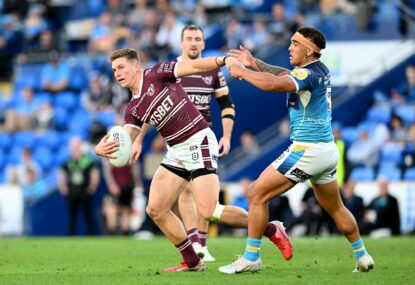 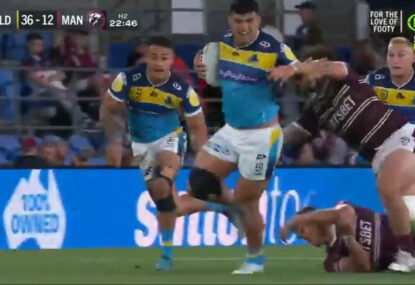 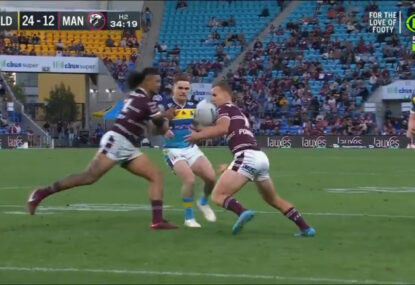 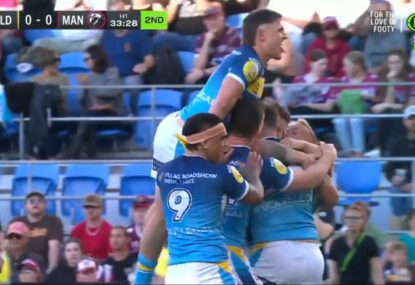