Wallabies prop Taniela Tupou delivered an immense performance in defence and attack, delivering a cheeky moment of the match, as the Wallabies beat the world champion Springboks for the second time in a week.

Last Sunday they needed a kick after the siren to grab a come from behind win but apart from a short time after the halftime break, the Wallabies looked good for their 30-17 win, secured 10 minutes from time.

Marika Koroibete and Len Ikitau – with his first two Wallabies tries – scored try doubles but it was Tupou, playing from the start with Allan Alaalatoa missing the Test, who stood tallest, at least figuratively, against a power packed Springboks pack.

And his gorgeous no look pass to send Koroibete in for the try that broke the Springboks’ hopes was the game’s definitive moment.

The only sour note for Australia, on a night they improved their world ranking to No.3 and regaiied the Nelson Mandela Plate, was a suspected broken arm suffered by fullback Tom Banks in the first half.

“The silverware’s nice,” said Wallabies coach Dave Rennie, reflecting on his best win in 14 games in charge. “We’re more happy around the quality of the performance and courage under pressure. A really good night for us.

“We tackled well and it was a great defensive effort.”

South Africa coach Jacques Nienaber had no excuses and said it was the team’s worst performance since losing to Argentina in 2018. “Australia were brilliant tonight. We were well beaten in everything,” he said. “As coaches we didn’t get it right.”

“We can just sincerely apologise. This was not a performance worthy of the Springboks jersey.”

The Wallabies were on the front foot early with Samu Kerevi making a stunning burst through the South African back line in the fourth minute. 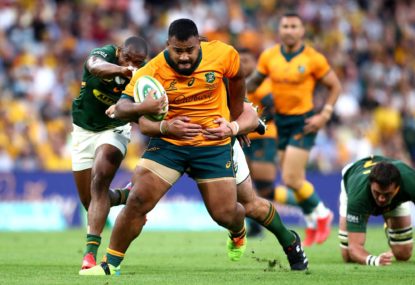 The Springboks were next to threaten, taking a kick for the sideline instead of for the three.

A week ago the Boks scored three tries from rolling mauls, but they tried a variation, getting it badly wrong and Australia won a relieving penalty.

Australia had spent time this week trying to fix their issues against the rolling maul and they repelled the Boks four times in dangerous positions.

The first yellow of the match came on 13 minutes when Faf De Klerk cheekily pulled at Nic White’s arm to slow down a Wallaby attack with the Australians under penalty advantage.

It was a blatant and unnecessary error from De Klerk, who made a few other uncharacteristic blunders among some magic, while his box kicking was elite as usual.

It didn’t take the Wallabies long to take full advantage of the extra man, with Michael Hooper’s strong carry allowing Nic White to find Ikitau, who drove through Handre Pollard’s tackle and then Siya Kolisi for his first Wallabies try.

Quade Cooper, who was a perfect eight from eight from the tee in the win last week, had relatively simple kick but banged it into the near upright.

Ikitau was over again seven minutes later, after Pollard had landed his first penalty.

The initial surge came from Tupou and after his incisive run, the Wallabies backs went to work, with Banks finding Marika Koroibete joining in on the right from the left wing. His reverse pass split the defence and put Ikitau over, the youngster celebrating with glee. Cooper slotted the tough conversion.

Banks’ season likely came to end on 27 minutes, crunching into a tackle but walking away in agony, nursing what Rennie said was a suspected broken arm. His loss from the rest of the series opens the way for a return of James O’Connor when the Wallabies play two matches against Argentina in the next fortnight.

The Wallabies, buoyed by their win last week, were enthusiastic, but the discipline issues that dogged them in the Bledisloe Cup clean sweep were never far away.

On 30 minutes Kellaway was penalised for tackling his opponent in the air and Pollard potted a third from three.

Then Lachie Swinton smashed into Duane Vermeulen and was given a yellow card after a long consideration during which referee Matthew Carley suggested he was going to show a red before being talked down by his TMO.

Swinton escaped the worse punishment as the slow mo replay showed his shoulder met the South Africa’s a fraction before their head collided.

“I think the issue is that the amount of preparation time that Lachie Swinton’s got to prepare his body height to make that tackle. You’ve got a lot of lead in time, there’s no late dip from Vermeulen so you have no real mitigating factor except for shoulder on shoulder first.”


Swinton’s discipline has been questioned since suffering a red card on debut.

“He is getting a bit of a kaleidoscope of history there isn’t he,” said Harrison. “We love what Lachie brings to the game and you can’t hope to get dominance in a game if you don’t have characters like that who fill jerseys and get on top of people.”

Pollard’s fourth penalty cut the margin to 15-12 at the break and De Klerk put them ahead three minutes into the second term. He took control in the lead up and then delivered a sweet kick in behind the Wallabies backline to allow Lukhanypo Am to fall on the five pointer.

The Wallabies nudged back in front through a Cooper penalty then sent local halfback Tate McDermott, on his 23rd birthday, into the fray on the hour.

Soon after Tupou delivered his moment of magic.

Standing in the back line wide on the left Tupou delivered a short and sweet no look flick pass to a storming Koroibete who had clean air in front of him in the run to the try line.

“Taniela Tupou probably didn’t have to do that box office type pass but that’s why we love him,” said former Wallaby Drew Mitchell on Stan’s coverage.

“He’s a highlight reel every time he takes the field.”

All Blacks legend Andrew Mehrtens added: “What a beautiful touch it was from Taniela Tupou. Last week it was all about the Quade Cooper kick at the death, this week it’s going to be all about that crucial try scored by Koroibete and for Tupou to be involved in such a way was just extraordinary.

“They were deep in the second half, Tupou had been on from the start and that forward pack standing up against the world champion’s pack.

“You might have expected in Super Rugby he would try to go the whole way in front of his home crowd but he let it on and it was a really big moment.”

With the conversion, Australia went eight points clear, then replacement Pete Samu blitzed through, to set the platform for Koroibete’s second.

South Africa pressed down the stretch but the Australians held firm, Tupou coming up with one huge hit before coming off with two minutes to play to a huge ovation.