Port Adelaide star Ollie Wines claimed the 2021 AFL Brownlow Medal in the most exciting count in quite some time… but an archaic TV rights situation meant many footy fans couldn’t watch a minute of it.

Here are the big talking points out of the AFL’s night of nights.

7Plus… minus all the good stuff
The integration of streaming services into everyday life has now given people an expectation that whatever they want to watch is now just a click away. With Kayo Sports a staple of every self-respecting sports fan’s monthly expenses, plus new faces such as Stan Sport and Paramount+ entering the market, we’ve grown accustomed to simply booting up our laptops or opening our phones and tuning in.

But it seems Channel Seven – and the AFL – aren’t with the program, as it were. Because the first indication for thousands – if not more – Australians that something was amiss was when they logged onto Seven’s streaming service, 7Plus, for the Brownlow count – only to find no trace of it.

Great news for Border Security fans, to be sure… but AFL lovers everywhere were left feeling rightly jilted.

We only have smart TVs and there’s no #brownlow on @7plus WTF. Also no paid streaming option via @AFL either… how is this a thing in 2021?! @Channel7

I'm trying to stream the Brownlow on 7Plus (forgive me, I'm in lockdown!). But I'm getting Border Security instead. Either Peter Dutton is about to cause a big boil over by beating the Bont or something is going wrong here?#Brownlow

Can any ???? experts explain @7AFL’s logic in not making its #BrownlowMedal coverage available on @7plus? There must be a reason…

The reason why is simple: Seven don’t have streaming rights for any of their AFL-related content. After Telstra ended their AFL Live Pass access at the beginning of 2021, they now belong exclusively to Foxtel and Kayo Sports … who, as it happens, can show everything EXCEPT the two biggest events on the calendar. Namely: the Brownlow Medal and this Saturday’s grand final, which are the sole domain of Seven.

It took Seven until the count started to notify expectant fans venting on Twitter that they wouldn’t be able to stream the count on 7Plus.

PSA: due to rights restrictions, the #BrownlowMedal cannot be streamed on 7plus.

You can watch live and free on Channel 7.

While the network took the lion’s share of the blame on social media last night, they’re not solely to blame for the shemozzle. It’s a farce in this day and age that supposedly the biggest sporting competition in Australia can prevent a network from live-streaming an event it has exclusive access to. Can you imagine Channel Nine doing the same with the State of Origin series?

Fixing the contract up must be a priority for the AFL, and surely will be after Monday night’s debacle. It’s a shame it comes as too little, too late for many fans left in the lurch.

And fair warning – unless you’ve got access to a special set-top box in this list, you’re going to need to break out the ‘rabbit ears’ to catch the grand final on Saturday night.

Ollie Wines – Brownlow Medallist, and straight-up savage
Heading in as the favourite after an outstanding season, averaging over 32 disposals in Port Adelaide’s run to the preliminary final, Wines secured his place among the game’s elite with a maiden Brownlow, for himself and the club.

Fascinatingly, he did it despite the very thing that arguably gave him that favouritism – a lack of teammates to take votes off him – being flipped on its head. Where Melbourne stars Clayton Oliver and Christian Petracca were expected to drag each other down, and ditto Bulldogs pair Marcus Bontempelli and Jack Macrae; it was Wines’ partner in crime Travis Boak’s 25 votes which was the highest club runner-up tally of the night.

Boak’s outstanding polling, particularly early in the night, makes Wines’ achievement of equalling Dustin Martin’s record of 36 votes all the more impressive. In 16 of 22 games, he was deemed to be among the three best players afield – a record he now holds on his own. 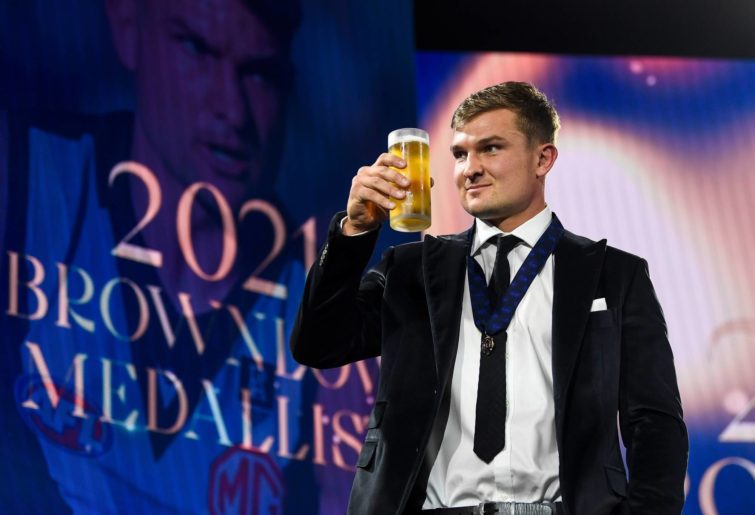 Sealing the result with two votes on Bontempelli’s Bulldogs in Round 23, the unassuming country lad from Echuca, in Victoria’s north, then proceeded to win the footy world over with plenty of blunt honesty in his victory speech.

When notified by host Basil Zempilas of his record-equalling haul, Wines responded simply: “I’m not sure about the numbers, but 36 sounds like a lot.”

Always a keen footy fan, his favourite player growing up was another Echuca product in former Carlton swingman Andrew Walker; he’d reveal a hilarious anecdote about a call to radio station 3AW in “the early 2000s” to talk about his idol with legendary caller Rex Hunt.

Reckon you'll be able to get onto talkback tomorrow Ollie ????#Brownlow pic.twitter.com/O8cIBJRFD7

Wines then had them rolling in the aisles when he singled out a few Power teammates who had tagged along to Perth, despite little chance of polling many votes themselves.

“We’ve got a really good crew [who have] come over tonight. A lot of the boys jumped on because I was a bit of chance, so I’m sure they’ll enjoy the night.

“There were a lot of guys who weren’t a chance of polling votes – Tom Clurey… he asked for the after party invite, so he’s got that!”

Finishing off the night with an impromptu phone call from Power president David Koch, the Brownlow will surely be some consolation for Wines after his team’s preliminary final defeat to the Bulldogs.

It certainly was for his family.

Forget ‘midfielder’s medal’, the Brownlow is a ‘favourite’s medal’
The last non-midfielder to win the Brownlow was Sydney legend Adam Goodes back in 2003 – and he was a ruckman who would win another ‘Charlie’ as a midfielder three years later.

It’s no secret that the AFL’s most prestigious award is now exclusively the domain of the on-ballers. When Taylor Walker’s 9 votes is the most by any permanent forward, and Tom Stewart’s 8 the highest by a backman, you’ve got yourself a pretty clear discrepancy.

However, in recent years the line has been pushed even further: it’s no longer enough to just be a midfielder to take home the Brownlow. Now, unless you’re one of the red-hot favourites being touted as a chance for months leading into the night, you might as well enjoy a cup of tea and turn in for an early night.

Since Matt Priddis took home a surprise Brownlow in 2014, six of the seven medals have been won by the pre-count favourite. Wines, albeit a far closer-run choice among pundits than the overwhelming fancies of Patrick Dangerfield, Dustin Martin and Lachie Neale in recent years, polled accordingly.

Don’t get me wrong: Wines, and those before him, are all indisputably worthy winners for outstanding seasons. But was his season really so astounding as to merit a Brownlow-record 36 votes (tied with Martin’s 2017 tally) and SIXTEEN appearances in the best three on the ground? You could say the same for Neale in 2020, who was adjudged by the umpires as best man afield ten times in seventeen home-and-away rounds, for a tally of 31.

Perhaps the most glaring example of this is at the Western Bulldogs. Runner-up Marcus Bontempelli finished narrowly second behind Wines with 33 votes; while teammate and disposal machine Jack Macrae, the man who this year broke the record for the most disposals ever in an AFL season, finished with… 12.

Not saying he should be leading but….

Suggestions that the umpires have enough on their plate to be awarding Brownlow votes as well are fair, but it’s not going to rectify this situation. The obsession with the game’s biggest stars in the weekly cycle that is AFL media has made it just about impossible to head into a game without your eye being automatically drawn to the Bontempellis, the Wineses, the Dangerfields. If they’ve been the hot topics on every footy show all weekend long and then rack up 30 touches, regardless of their effectiveness, is anyone surprised when they continue to poll so spectacularly? All the while, the efforts of not just the gun forwards, backs and ruckmen of the game, but now the unassuming Macrae-style midfielders too, go largely ignored.

For better or for worse, it seems we’re stuck with this trend. A bunch of hot candidates in 2021 at least made it interesting… but another Neale-esque count rout next year would be less than ideal.

History made as records crumble by the bucketload
Has a Brownlow ever produced so many new records? Well, the first one maybe, and those ones where two umpires gave the votes, but you get the idea.

It was a massive night for all the other top contenders, too; with Wines, Bontempelli (33), Oliver (31) and Carlton sensation Sam Walsh (30), it was the first Brownlow ever to feature four tallies in the 30s. The previous best? Two – between Martin and Patrick Dangerfield in 2017, Dane Swan and Sam Mitchell in 2011, and – one from the archives – Collingwood’s Des Fothergill and South Melbourne’s Herbie Matthews in 1940.

Speaking of old-timers, the ageless David Mundy became the oldest man ever to poll more than 20 votes, getting to 20 on the dot at the age of 36. Not to be outdone, 33-year old Travis Boak (25 votes) is now the oldest man to poll 25 or higher.

But it wasn’t a big night for others. Collingwood defender and premiership Bulldog Jordan Roughead set a new bar for the most games without a single vote, at 192. He beat out the previous holder, Geelong’s Tom Lonergan (191)… who was thrilled to pass on the baton.

Disappointingly, though, one eight-year streak came to an end with Wines’ win. Lift your game, Echuca.

Echuca has a McDonalds, so the streak is over. https://t.co/8j0jB3xxJ4