The NRL must stamp out diving and frivolous injury stoppages

Mitch Kenny is not a name super familiar in the NRL, yet he’s managed to become a massive talking point this week without actually doing anything wrong.

The poor guy went down injured with a problem that could keep him out of the next Panthers game against the Storm. As soon as that happened, a Penrith trainer asked for the game to be stopped, and that’s what’s caused a problem.

Blake Ferguson is a far more familiar name, but he too managed to create headlines, this time for something he did do wrong. He made a run that resulted in him holding his head when tackled, as though he had been injured.

Once the whistle had been blown for a penalty to his team, his ‘injury’ miraculously disappeared and he was able to continue to play.

I’m not going to comment further on the rights or wrongs of either incident. In the case of Kenny’s injury, the NRL is investigating this stoppage, and in Ferguson’s case there’s been lots of media space devoted to this already. What’s clear is that these sorts of incidents detracted from a terrific game of football and hurt the sport of rugby league. 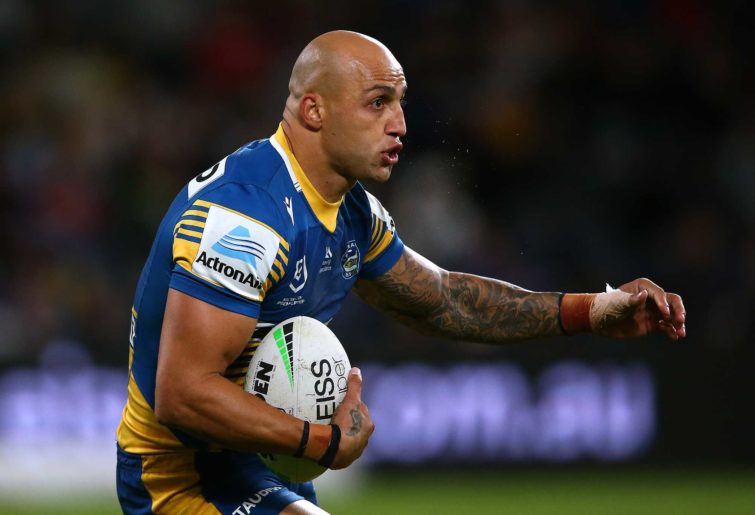 The NRL is caught in a tough place. Their first and only concern at the time a player goes down injured must be for the health of the player and the welfare of those attending them. In other words, referees must assume the player is genuinely hurt and perhaps hurt badly.

If an injury is deemed serious enough to stop the game, that’s completely the right thing to do.

I remember St John’s Ambulance officers trying to treat injured players in years gone by with the match continuing around them. More than once they were caught up in play and could easily have been injured, which makes this rule a sensible one.

That said, calling a halt to play because of injury seems to advantage the defensive team more often than not. Attacking teams rarely ask for play to be stopped because one of their players is badly injured.

Coaches claim this is a ploy, and in the case of Mitch Kenny that is an understandable perception. The Eels were on the attack, ten metres out on the third tackle with the Panthers down a player.

When the match resumed the Panthers had regained their full complement of players and had their defensive line set. Paramatta still had four tackles but had lost attacking momentum.

In order to even out this result the attacking side needs to be given a seven-tackle set from where they finished up when play was stopped. In the example involving Mitch Kenny, that would have meant the Eels would have had seven tackles ten yards out from Penrith’s line.

It would not compensate for the loss of attacking momentum, but it would even up the advantage Penrith gained in this instance.

In addition, the injured player cannot return for that match, and their ongoing fitness to play in future games would have to be assessed by NRL doctors.

The other point to consider is what type of serious injury warrants a game being stopped. In the case of Mitch Kenny, I don’t think there’s a lot of doubt he suffered a serious leg injury, but does that warrant stopping the game? It’s not my call to make, but that might be something the NRL could look at for next season.

It’s quite ironic that the NRL builds itself up as one of the toughest, fastest team sports in the world, yet players seem okay with taking a dive.

I’m yet to hear one reason that makes this action palatable, so it’s up to the NRL to make it so unacceptable that players will not want to do it. The only way to do that is to make the penalties severe.

Referees should continue to call the game as they see it, and if they believe a player is injured in a tackle, they should make a call on whether they penalise the defending team or not.

In the case of Ferguson, he made it clear straight after his team was awarded a penalty that he was not injured. In that sort of case, when the player gives themselves up, they should be sent off and the penalty should be reversed.

The match review committee also needs to get involved to stamp out this practice, as does the judiciary. Both need to identify and punish this type of action. Players need to cop both big suspensions and carryover points, but to encourage clubs to stop this, the NRL has to impose a diving levy.

Where a player is found guilty of taking a dive in a minor round match, they are penalised as mentioned and the club is levied one per cent of their salary cap for the following season.

If a player is found guilty of diving in the semi-finals, that levy is increased to ten per cent and in the grand final to 20 per cent. As an aside, that levy would be used to support funding for country football and women’s competitions.

Many will of course think this is too harsh in comparison to other penalties, but perhaps it’s time for penalties for other infringements to be significantly increased and for clubs to be more accountable both for their players’ actions on the field and for the NRL brand.

Remember that the NRL is an international product and, come finals time, more people within and outside Australia will be watching matches. Seeing incidents that bring the game down have to be stamped out if at all possible.

Will these suggestions completely stop these problems? The simple answer is no, but if the penalties significantly reduce these sorts of issues from occurring, they are worth implementing.

One question remains: would Fergo have taken a dive if it cost his club just under a million bucks?