The Western Bulldogs had their moment in 2016 and will certainly be trying their darndest to have another one.

In 2005 and 2007 respectively we also saw Sydney and Geelong break decades-long hoodoos.

Richmond followed the Dogs in 2017 with a stunning run of success that no-one saw coming. And it is from the Tigers that there are some similarities that we can see in the Demons.

There was much talk from the Melbourne camp across pre-season that something was different this year and it centred on their selflessness. They would finally draw a line in the sand and put team first as players.

Most clubs have a theme heading into a new season, but it’s all talk until we see it. Richmond had a theme of connection and vulnerability heading into 2017, the building blocks upon which their premiership dynasty was built.

Each team has to find their own way to something unique beyond just kick, marks and handballs, and it seems like the Dees have happened on it. They decided to be a champion team rather than a team of champions.

The Tigers burst out of the blocks with a 5-0 record in 2017 before suffering their first loss, while Melbourne opened this year 9-0 as they barnstormed their way into the season.

Richmond missed the finals in the year before their first flag, just as the Demons did last year. Both sides had put the writing on the wall in prior seasons though.

The Tigers famously lost three elimination finals in a row from 2013-15, before bombing out horribly in 2016. The fall was so steep, so stark, so awful, it forced the changes that led to the ultimate success.

Melbourne sailed all the way to a preliminary final in 2018, defeating perennial powers Geelong and Hawthorn along the way, after knocking on the door of finals in the previous couple of seasons. They started 2019 as one of the premiership favourites. 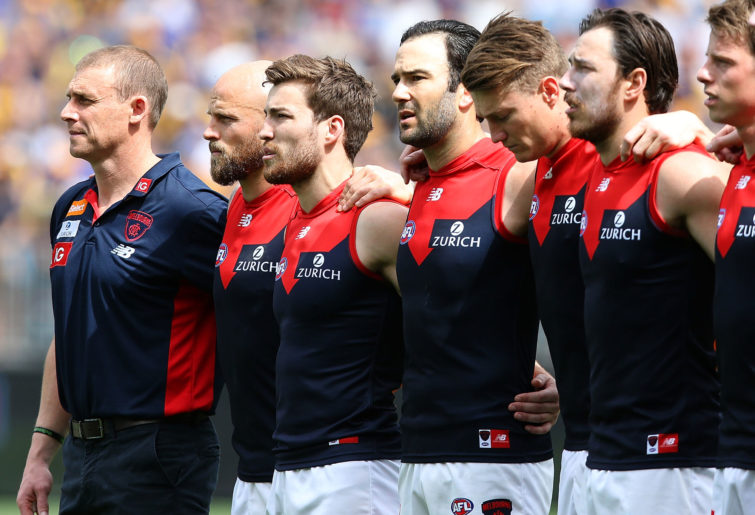 The Demons before their 2018 preliminary final match. (Photo by Paul Kane/Getty Images)

It’s clear the Dees weren’t mature enough to handle expectation and have admitted that they got ahead of themselves following their prelim. They bombed spectacularly, and dropped all the way to 17th.

It forced Simon Goodwin to confront some home truths about the club and the way he led it, mirroring the journey that Damien Hardwick went on.

2020 was a tough season, with the entire country – including football clubs – dealing with COVID for the first time. The stops. The starts. The hubs.

Despite missing finals, from the outside Goodwin seemed strangely confident and upbeat in the latter part of the season.

Melbourne had won three games after Round 9 last year and were sitting 15th on the ladder. It looked like more false promises, another wasted season, and possibly another decade in the doldrums. But they came home with a 6-3 record in their last nine matches to just miss out on the eight. It was a sign of things to come.

Richmond brought in three experienced key recruits for 2017 – Dion Prestia, Toby Nankervis and Josh Caddy. They all played 22-plus games and were integral parts of the run to the premiership, each a different piece of the puzzle.

The Demons have tracked a similar path with targeted recruiting from other lists, albeit not as immediately dramatic.

Jake Lever was the first piece added in the off-season of 2017, to stiffen up a weakness in tall defenders. Steven May followed a year later, and key defence was locked away. It’s fair to say Melbourne wouldn’t be in the grand final without these two, and they are integral to their gameplan.

Outside run was required, so Ed Langdon was brought in for 2020 to take up a position on the wing. After being effective last season, he went to another level this year and could be considered unlucky not to make the All Australian 40. 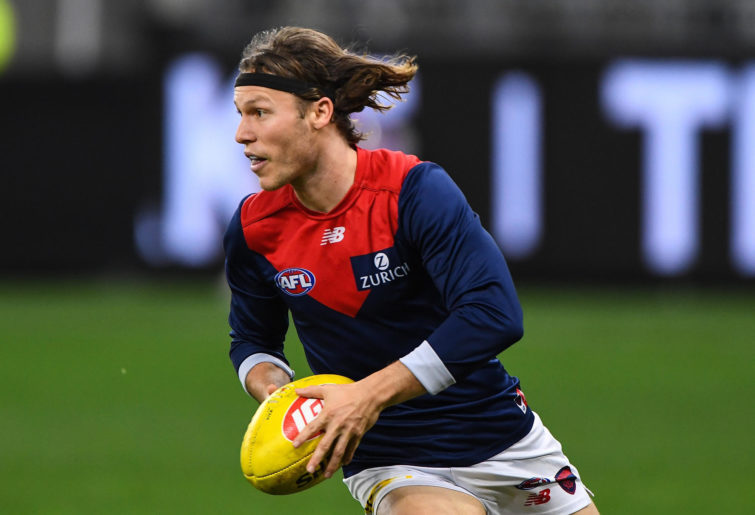 With Sam Weideman flattering to deceive and Tom McDonald having a poor year, the key forward position was identified as a weakness that needed resolving for 2021.

Enter Ben Brown, in a serendipitous piece of timing of someone’s trash becoming another’s treasure. While taking most of the season to fully consolidate his position, he has set new standards for himself in competitiveness. You can teach an old kangaroo new tricks and make no mistake, he has been a more-than-valuable contributor in this six-win stretch to the grand final.

We know Richmond had the stars in 2017 – Dustin Martin, Alex Rance, Jack Riewoldt, Trent Cotchin. Melbourne has plenty of these – Christian Petracca, Clayton Oliver and Max Gawn, as well as the aforementioned Lever and May. They need no introduction, their exploits are highly regarded.

The Demons have all of this covered.

Bayley Fritsch and Christian Salem have certainly had career seasons, one at each end of the field, and we’ve spoken about Ed Langdon in the same category.

They also have a number of roles players executing well, that has also contributed to them having their most valuable seasons – Alex Neal-Bullen has really found his niche as a linkman in the forward half, Charlie Spargo has cemented his spot as that forward-line terrier with a touch of class, and Angus Brayshaw has owned the defensive wingman role. Down back, Trent Rivers and Harry Petty have been solid enough in defence to enable the stars to do their thing with more freedom.

In terms of fresh blood that has added excitement, we can’t go past a Rising Star winner in Luke Jackson, alongside the irrepressible Kosi Pickett. The longer the season has gone, the Jackson-Gawn combination has really gelled, with the latter owning the last part of the year in different parts of the ground thanks to the relief Jackson provides. 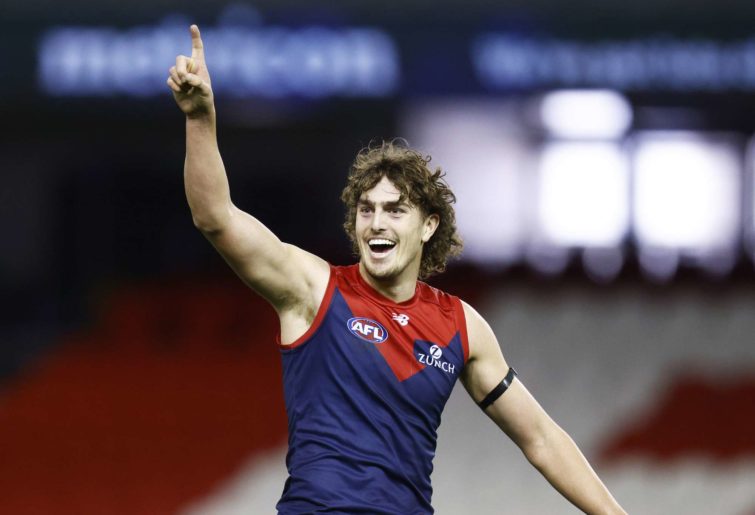 Jake Bowey’s seventh game is going to be an AFL grand final. Just another little similarity with Richmond of 2017 that had Jack Graham playing his fifth – the Tiger 19-year-old kicked three goals and polled in the Norm Smith. Bowey has shown class, poise and grit beyond his teenage years.

What Melbourne really has going for them is a confidence and belief, but not an arrogance, that is just brimming. We know it when we see it. Everything is in sync, culminating in a series of powerful performances on the road to this grand final.

The Demons’ last loss was actually to the Bulldogs, back in Round 19. The Dees had a number of costly lapses in defensive 50, which led to several stoppage goals to the Dogs, a situation you’d think is unlikely to reoccur.

It’s no bad thing to have dropped a home-and-away game to your finals rival. This finals series alone we’ve seen a number of results reversed from their previous meetings. The Dogs themselves have done it twice, beating Essendon and Port after losing to them in Round 21 and 23 respectively. It’s easier to drill down and correct things that haven’t worked.

1964 is the last time Melbourne won the premiership. A 23-year finals drought followed that win and they’ve only made two grand finals since – they lost the first in 1988 to Hawthorn by a then-record 96 points, and were never in the hunt in 2000 against Essendon when going down by ten goals.

There is a sense of destiny about the Demons this year and it’s all falling into place.

After all these decades, it’s finally going to be a grand old flag.