Exciting young gun Mary Fowler scored a first-half brace and was a shining light at Tallaght Stadium but Australia’s defensive issues proved their downfall, while they will also sweat on a knee injury to Chloe Logarzo.

Australia were missing a collective of starting players, including Caitlin Foord, Ellie Carpenter, Emily van Egmond, Hayley Raso and Kyah Simon in their first game since the Tokyo Olympics.

Goalkeeper Mackenzie Arnold, who didn’t feature in Tokyo, returned to the fold while Courtney Nevin made her starting debut in defence.

The Matildas dominated possession but struggled to deal with Ireland’s frenetic counter-attacks – and after just three minutes, were a goal down.

Kyra Cooney-Cross gave away a free kick in a dangerous area and Lucy Quinn tried her luck on goal directly from the free kick.

It looped over the wall, bounced off the near post, then ricocheted off Arnold into goal.

The Matildas settled into the game after the goal, then hit back in the 14th minute.

Emily Gielnik one-touched Nevin’s long ball into the path of Fowler, who tried her luck from range and saw her shot squirm through the hands of goalkeeper Courtney Brosnan.

Alanna Kennedy was inches from a calamitous own goal when she smashed a header into her own crossbar in the 20th minute.

The Matildas had plenty of chances to equalise but left it to injury-time in the first half, with Fowler’s ambitious strike taking a heavy deflection to put Australia back on level footing.

Lydia Williams replaced Arnold at half-time – but four minutes into the second half, Louise Quinn capitalised on a total lack of defensive pressure to score the easiest of back post headers from a corner.

Logarzo injured her knee in a challenge in the 53rd minute, which saw midfielder Clare Wheeler make her debut.

Kerr looked isolated for much of the second half and received a yellow card after kicking the ball away in frustration following a foul in the 75th minute, with the Matildas left to rue their failure to find clear-cut avenues to goal.

The Matildas return to Australia for the first time since March 2020 but not under the circumstances they would have expected. Women’s football has been in the spotlight after former Matilda Lisa De Vanna publicly aired allegations of historical abuse as well as alleging a continuing toxic culture in the game from the grassroots to […]

Captain Sam Kerr has described the Matildas as a “safe haven” as the team issued a statement defending their culture after claims of sexual abuse and harrassment from women’s soccer great Lisa De Vanna. 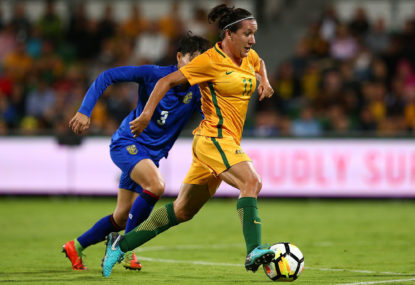 Football Australia has announced an independent investigation into the treatment of female footballers after Matildas legend Lisa De Vanna made allegations of sexual abuse suffered throughout her career.