His South African charges may be heartbroken for home shores too, after the prolonged quarantine in Queensland. It must be feeling like a very foreign land after two successive losses to Australia.

Whatever his influence behind the scenes, not a word has been heard from Erasmus, nor sight seen of him in public. No waterboy ventures on to the paddock, no social media or 62-minute videos off it.

It is as if a central piece of the puzzle is missing for South Africa and nothing is quite falling into place as it should. Their nominal head coach, Jacques Nienaber, prefers the forensics of the research laboratory to being centre stage for the media.

He offered a typically thoughtful and forthright summary of the Boks’ 30-17 defeat after the game:

“We were really beaten. Every department. We got hands down beaten in everything. Defence, kicking game, attack.

“We can just sincerely apologise [to Springbok supporters], from everybody. This was a very poor performance.

“I think definitely from a defensive viewpoint we need to change, do things better. I think the last time we conceded four tries was against New Zealand in 2018. This is not something that we are normally used to.

“Our one-on-one defence today was poor. We missed too many tackles.”

It is easy to clear up Nienaber’s evident confusion about the Springboks’ sudden decline in performance. In South Africa, they enjoyed a run of five games (three against the Lions, two versus the Pumas) with the tide of refereeing flowing more or less in their favour.

Rassie’s social media outburst after the first Lions Test was a clever stunt which cowed all the officials into playing by the rules the Springboks wanted, especially at the breakdown. After Erasmus had finished with Nic Berry, all of the referees in the next four matches were awarding the defending side the majority of penalties at the ruck.

That suited the Boks, who like to keep control of the ball not by playing with it themselves, but by winning penalties from their impressive set-pieces (scrum and driving lineout), and by regular steals at the breakdown from their army of on-ballers.

The danger of losing the ball in phase-play persuaded opponents to take on the South Africans at their own game – a game full of kicking, set-pieces and stoppages. It was not a game they could hope to win.

With the stage moving to Australia and Rassie vanishing into the background, the picture has shifted. Two referees from the English Premiership (Luke Pearce and Matt Carley on Saturday) have been in the hot seat, and the Wallabies have swept the series against South Africa. It is no coincidence.

Nic Berry awarded 70 per cent of penalties at the breakdown to the attacking side in the first Test versus the Lions, and 18 of the 26 bits of footage in Rassie’s outburst were focused on that same area.

On Saturday afternoon, the Springboks had to wait until the 77th minute of the game for their first turnover penalty at the ruck, and that came from Australia sealing-off rather than an outright poach.

At that stage, Carley had awarded eight penalties to the attacking side, and only two to the defence at the breakdown. He had religiously applied the credo of the English Premiership; first, clear the tackler away; second, ensure that the first arriving defender is fully supporting their own bodyweight; third, show zero tolerance for cynical play.

The outcome in the second half of the 2020 English Premiership season was a glut of ‘LQB’ (lightning-quick ball) for the attack, and ‘LQT’ (lightning-quick turnovers) for the defence. Both sides at Suncorp Stadium looked surprised to find themselves playing under a new set of rules, but it was Australia who adapted far more quickly and easily to them.

That is the explanation Nienaber was seeking at the post-match presser. The Boks won their usual share of penalties from their scrum and lineout drive (seven in all), they won the aerial reclaims and they enjoyed 60 per cent of territory and possession overall.

But they could not control the tempo of the game because they won no turnover ball at the ruck, and they were not sure what to do with the quick ball that they won themselves. South Africa launched no fewer than eight of their in-play kicks from inside the Australian half.

Matt Carley awarded his first breakdown penalty in only the second minute, with Faf de Klerk fringing offside at the ruck. The Wallabies made a clean break through Samu Kerevi at the very next lineout.

Eight minutes later, Eben Etzebeth got trapped on the wrong side of the ruck (penalty Australia) after a barn-storming run by Tanilea Tupou. The issue was compounded by more cynical play by Faf, trying to swipe the ball out of Nic White’s hands as he went to pass. 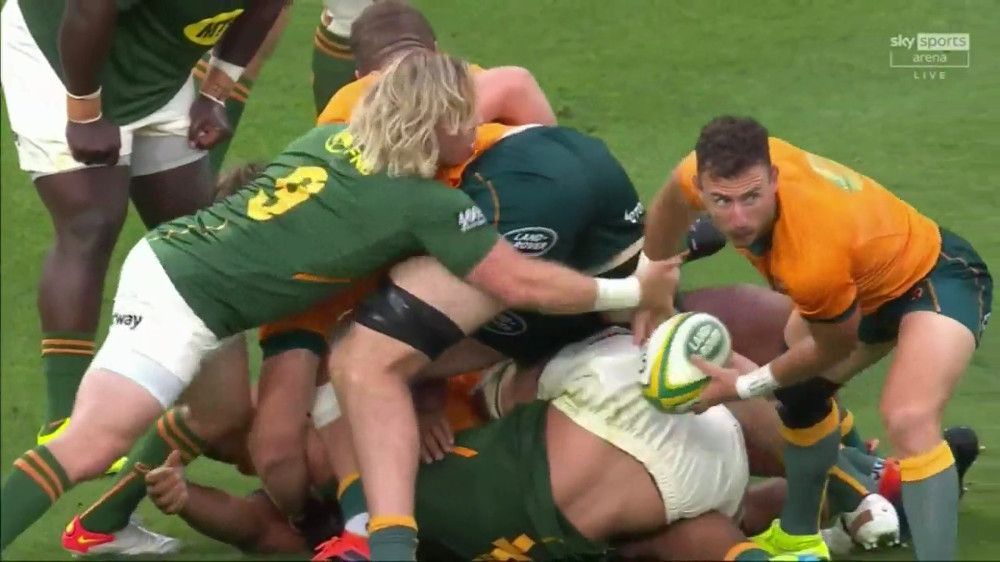 Matt Carley rightly showed zero tolerance: “You’re killing the ball under a penalty advantage” he was heard to comment to de Klerk, as the scrumhalf trotted off for a ten-minute break on the side-line.

Australia’s young centre, Len Ikitau, who has made such a name for himself over the two matches against the world champions, scored immediately off a classic example of lightning-quick ball.

It’s a one-second ruck delivery off the run by James Slipper with only a single cleanout player required (Lachie Swinton), and that grants Ikitau a one-on-one with Handré Pollard on the next phase. 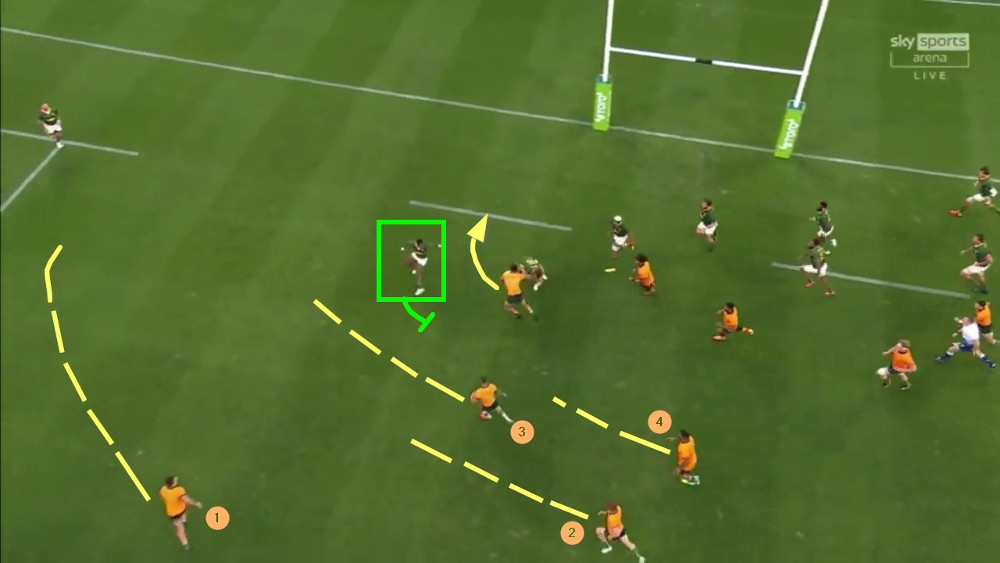 With Wallaby support runners flooding around into the wide-open spaces to Ikitau’s left, Springbok wing Sbu Nkosi is forced to come up and try to cut off the play, leaving the outside-half isloated underneath him.

Another powerful run by Tupou, and another infringement by South Africa at the tackle set the scene for the brace by Ikitau.

Nkosi leaves his feet during the competition for the ball and that is another penalty advantage, then the combination of Tom Banks, Marika Koroibete and Ikitau expose Pollard’s defence in the wide right channel.

With a higher percentage of immediate ball-placements, the second cleanout support player (Kwagga Smith) is not close enough to the scene of the action to prevent Reece Hodge winning an instant turnover, and triggering a counter which led eventually to Australia’s fourth try of the game.

More lightning-quick ball from the breakdown, which means that Marika Koroibete only has to skin a prop (Vincent Koch) to score the try. The defence simply cannot get a breather and create the time needed to reorganise.

The quicker tempo of play in and around the breakdown was just as big a problem for the world champions when they had the ball themselves. 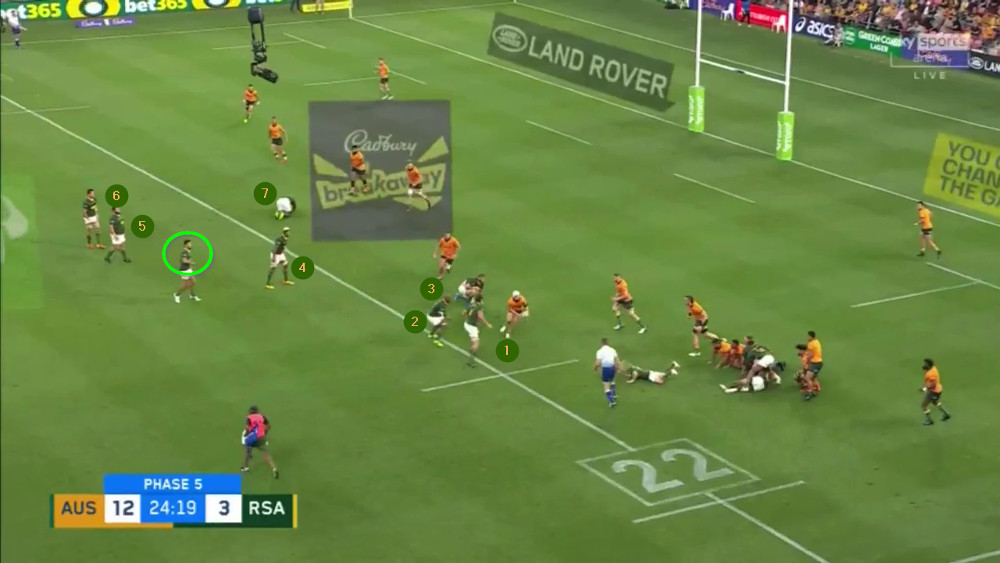 Two backs are consumed in the cleanout, and seven of the eight players outside Faf de Klerk are forwards. The nearest back (Damian de Allende) is at least 20 metres distant, so there is no possibility of the attack continuing with any momentum.

In the following example, South Africa tried to shift the ball wide on first phase from set-piece, but the demand for a quick release, and all contestants on their feet encourages a winning counter-ruck by the Wallabies (their second of the game).

The South African forwards only come into shot at the end of the phase, when the ball is already lost.

Two or three quicks rucks in a row create as much stress on the structure of the attack as it does on the defence, leading to the kind of cut-throat see-saws of ball possession so characteristic of the 2020 English Premiership play-offs. 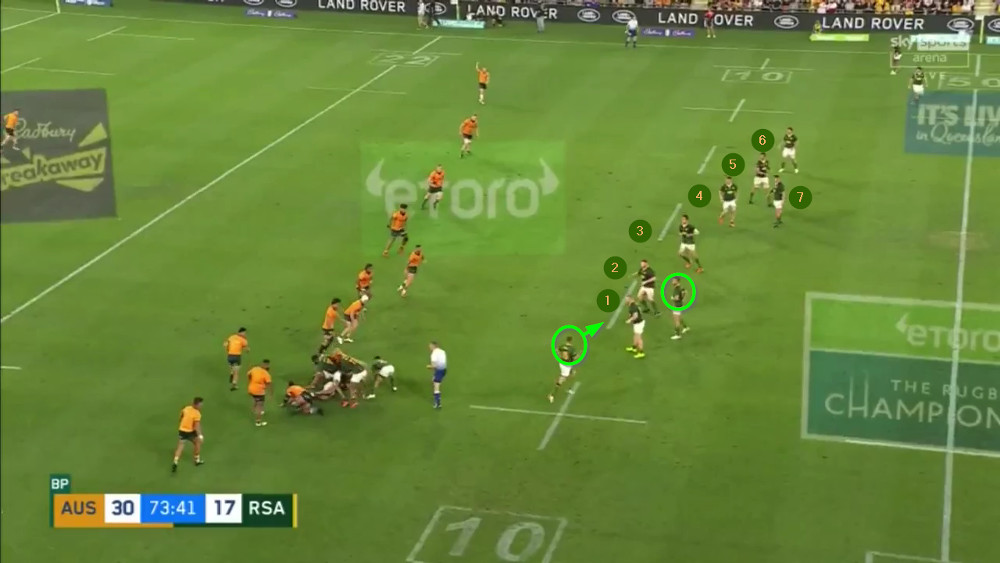 Replacement scrumhalf Herschel Jantjies only gets to the ball in time to knock it forward, and the attacking scene behind him is a picture of chaos. Willie le Roux is still running back into position, and the Springbok forwards are all strung out in long line across the field, with no depth or structure in their alignment. A turnover is the inevitable outcome.

There were several notable performances on the field for the Wallabies at Suncorp – Taniela Tupou up front and Len Ikitau behind, just to name-check the obvious – but the two biggest players off the field were unquestionably Springbok head honcho Rassie Erasmus and English referee Matt Carley.

Erasmus’ glaring absence from the ‘orbit of influence’ on Rugby Championship referees in Australia took the pressure off Carley. Despite a couple of wobbles in deciding the fate of Lachie Swinton and Jasper Wiese, Carley felt free enough to implement the English Premiership rules at the breakdown, and the game was all the better for it.

Tacklers were asked to clear out more quickly, defenders wanting to contest the ball were required to stay on their feet, and there was zero tolerance for cynical play.

Ruck resolutions became noticeably quicker, and that suited the Wallabies more than the Springboks. With Luke Pearce and Matt Carley due to officiate South Africa’s two remaining games versus New Zealand, the world champions have suddenly and unexpectedly reached a point of crisis.

If they cannot get the referees to play by their rules, the Boks will have to change. Kicking the ball away to New Zealand, or giving the Kiwis a succession of quick rucks is unlikely to produce the desired outcome.

To lose one match may be regarded as a misfortune, to lose two looks like carelessness – but to lose a third and fourth, against their fiercest rivals? Not even their staunchest supporter would be looking at South Africa as the world’s best after that.