The Roar
24th September, 2021
28
Join the conversation
1086 Reads
Advertisement
Write for The Roar

The South Sydney Rabbitohs are back in the NRL grand final for the first time since 2014 and just the second time since 1971, after monstering the Manly Sea Eagles 36-16.

The 71-year old is now just one win away from becoming the first coach to win premierships with three different clubs, having already won six with the Brisbane Broncos and the 2010 decider with the St George Illawarra Dragons.

Be it Damien Cook’s perfect off-balance kick to set up Walker’s second – on his opposite foot, no less – or Jaxson Paulo’s remarkable ‘moonwalking’ effort to secure his own double in the second half delighting everyone but a bewildered Bennett, the Rabbitohs were seldom challenged as they became the first team to secure passage to next week’s decider.

They will now wait to take on either minor premiers the Melbourne Storm, or a Penrith Panthers outfit they beat just a fortnight ago.

The build-up could hardly have been more chaotic for the Sea Eagles, falling victim to Brisbane’s famously troublesome traffic and forcing the match to be delayed by 15 minutes. They would soon wish they’d remained there, with Walker giving Souths the perfect start after some sloppy defence in the opening minutes. 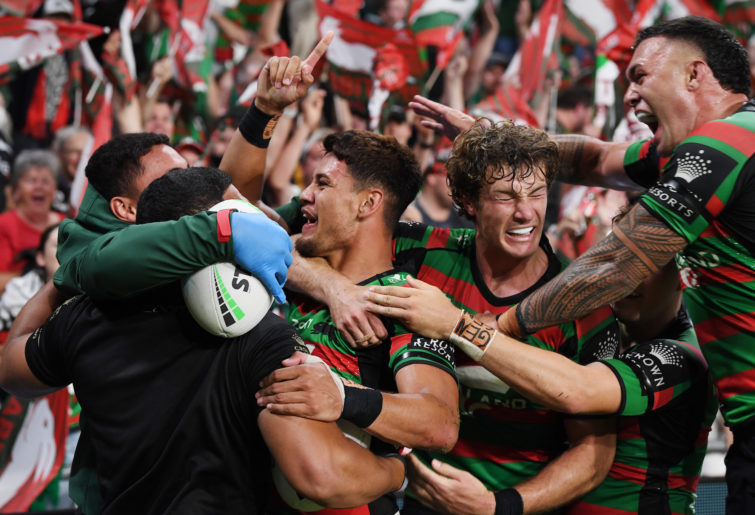 The Bunnies are into their first grand final since 2014. (Photo by Bradley Kanaris/Getty Images)

With late inclusion Sean Keppie knocking himself out on Rabbitohs prop Mark Nicholls’ hip – the lack of any stoppage to the play no doubt infuriating many a Parramatta fan watching from home after last week’s drama against the Panthers – the warning signs were blaring for coach Des Hasler.

Far from starting slowly, though, the Sea Eagles were left to rue a pair of controversial missed opportunities that, as it proved, would cost them any hope of gaining a foothold. First, a Reuben Garrick try to square the ledger at 6-6 was struck down after the bunker ruled Moses Suli had obstructed captain Adam Reynolds; a call that, while correct by the letter of the law, left the underdogs feeling hard done by. Such feelings only grew stronger as the Rabbitohs whisked the ball straight up the other end for Alex Johnston to double the lead.

Less dubious but equally crucial was Tom Trbojevic’s spill only minutes later, after the Sea Eagles’ talismanic fullback appeared to have dragged his side back into the contest. Electing to take on Blake Taaffe rather than offload to Jason Saab, the Dally M favourite lost control just millimetres from the line, denying him a club record 28th try for the season.

By the time Trbojevic managed to break the record in the 73rd minute, the scoreline was 32-10 and the match well and truly gone.

Trailing 22-0 at halftime, but with a record this year of overturning deficits, a comeback looked on the cards when Garrick scored the try he had been denied in the 44th minute. However, from there the Rabbitohs would run riot, dominating with the match up for grabs to add two more tries from Campbell Graham and Paulo, and ensure a chance at a surprise premiership next week.

Paulo’s effort would some up the gap between the two sides; catching an Adam Reynolds bomb without a great deal of pressure from Garrick, the number five would opt to cover the ten metres to the line backwards, beating an oncoming Trbojevic to kick off party time. As far as symbolic moments go, it was almost perfect.

Manly’s frustrations with the match – and the season – slipping from their grasp were summed up by an ugly lifting tackle from prop Josh Aloiai on opposite number Nicholls enough to trigger a melee, though no Rabbitoh was silly enough to risk a suspension with the grand final within reach. In any event, Aloaia would quickly be sent to the sin-bin. 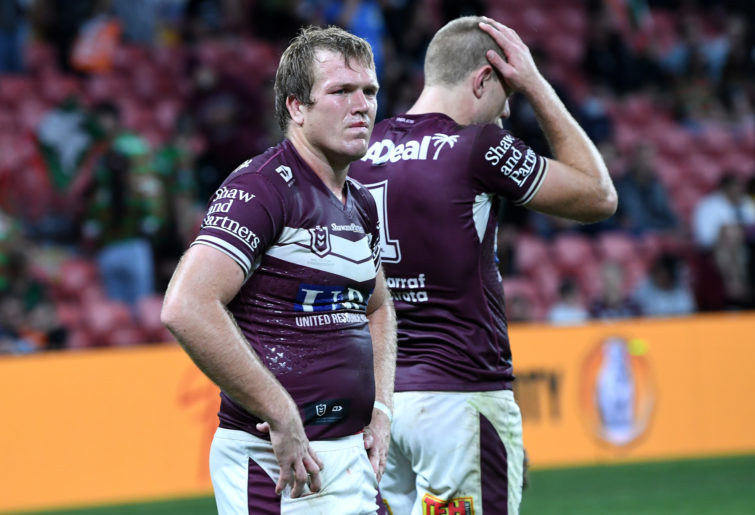 Souths fans would have been watching on nervously as a groin strain suffered mid-week at training left the brilliant Reynold clearly hampered, forcing him to relinquish the kicking duties to Taaffe. However, the captain would remain on-field until the 68th minute, with Bennett given the luxury of spelling him for the final minutes with the match well and truly in their keeping.

Trbojevic’s late try, plus a second to Garrick, would keep the scoreboard respectable; while Jake Trbojevic was titanic in defeat with a game-high 56 tackles. But fittingly, the match would conclude with Taaffe, who has hardly missed a beat since stepping in on the eve of finals to replace Latrell Mitchell, firing a scintillating cut-out ball for Johnston to add the icing on a red and white cake.