JAMIE SOWARD: The pressure imbalance and key battles that will decide Penrith vs Storm

Penrith probably should have won the title last year. Now they’re on the brink of two very successful years of winning nothing.

The Panthers have looked really stressed and tired through the finals. I know what that feels like.

In 2009 our Dragons team were minor premiers, and we went straight out the back door.

And then in 2010 the pressure was on and if we didn’t win that year we may never have won anything.

When you look back at our games in 2009 you can see the tiredness and tenseness in our game when we played that first week against Parramatta.

A week later, we were in Brisbane against a team we probably should have beaten, but the tension becomes real – that ‘we’re out after this weekend if we don’t win’.

If you said at the start of the year that week three of the finals would have Melbourne vs. Penrith and the Storm would be nearly double-digit point start people would have said you were crazy. But that’s where the Panthers are.

How can they rescue a season that’s slipping away? For a start they really need to narrow the focus – ‘let’s just try and get through the middle of this Melbourne Storm pack with our young, exciting forward pack. Nathan Cleary is going to kick us into position. We don’t need to beat Melbourne 24-22, we only need the beat them 2-0.’ 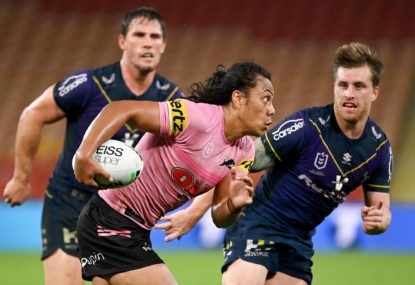 That has to be their mindset – defend really well, don’t let them get an easy start, which Penrith have been prone to conceding, and make the most of the opportunities.

The one thing Penrith can hold onto is they’ve been very good defensively in the first two weeks of the finals and that’s going to hold them in good stead. But their attack is an issue. I don’t think they’ve made adjustments on the run, to be able to throw enough at the opposition and they’ve relied on Nathan Cleary to do everything.

They need to get a lot more out of Apisai Koroisau and a lot more involvement and emotion out of Jarome Luai.

They have to get the chests out and the big smiles and everything that we love about watching Penrith. None of that has been there the last couple of weeks.

The blueprint from Melbourne will be to try and ambush their opponents, and the Panthers have conceded the first points in their last five finals.

The Storm will be trying to bang the front door down similar to how they did against Manly, and the matchup between Jesse Bromwich and James Fisher-Harris will be eye catching.

But for me, Cameron Munster versus Jerome Luai is the clash that is going to dictate what happens. If Luai can get his chest out and run the ball, and the left hand side can score some points early, then that puts some pressure back on the Melbourne Storm.

Brandon Smith versus Apisai Koroisau is another of the key battles. Smith is the best number nine in the world at the moment and his game management and understanding of when to run and when to pass is going to be crucial.

Koroisau needs to play the game of his life – he hasn’t quite been there lately and he’s such an important piece in how Penrith play their game that he needs to be firing at his best.

While the Panthers appear stressed, Melbourne seem to be anything but. They are so professional, they can beat you in many different ways.

If plan A is not working, they know ‘we don’t need to start throwing it out our backside and everything out the window. We just need to stay the course’.

It’s a quality organisation throughout, starting with Frank Ponissi and Craig Bellamy and the way they recruit.

We’ve all heard the stories over the last couple of years about the structures that they go through to recruit a player and they keep producing success stories.

Look at Justin Olam. He’s the best centre in the competition, which would make him the best centre in the world. He runs like he’s been shot out of a cannon, he’s always in the game, is physical in defence. And that’s a Craig Bellamy style player – someone who puts 110% into everything that they do and values the team first.

You reap the rewards of that when you become a team player and put your ego aside and excel at your job. Everyone else around you benefits off your performance and then you go to another level.

Melbourne Storm are the pinnacle of the NRL in terms of getting every little inch of talent out of their players and turning them into a success story.

Those guys that became superstars at the Storm didn’t come into the game as greats. They had to start somewhere and that’s under the coaching and guidance of Craig Bellamy.

Cameron Munster, and the player that he’s developed into, is often held up as the example. But I think Jarome Hughes’ transformation from a fullback/ bench player into perhaps the second-best half back in the world in terms of understanding game management and what his team needs, is an even more powerful example.

As a former halfback I love watching Jarome Hughes – his competitiveness, but also his understanding of what his side needs and how to execute it.

If you’re a young half back right now, learning the game and wanting to understand, it’s great to watch Nathan Cleary and DCE and what they do, but when it comes to understanding how to get the most out of your teammates and kick selection, Jarome Hughes is right up there.

This week’s the hardest week of the season for players, because you are so close to the best week of your life but you’re tired and have so much more to do.

You prepare this week like this is the Grand Final because in comparison, that match and everything that goes with that is going to be easy.

For us in 2010 it felt like (and no disrespect to the Roosters or Titans) whoever won out of us and the Tigers would win the Premiership. We knew the execution and everything that happened on Grand Final day was going to take care of itself, because we were a really good team.

But knowing that you’re 80 minutes from the best day of your life and a chance to win a ring brings massive stress.

All signs points to a Melbourne victory, and if they do win today then they will win the Grand Final.

If Penrith are able to cause an upset, which they’re very much capable of, I think that that momentum and that belief would only build and get tenfold and they can wipe away the bitter memories of last year.

Jamie Soward
Expert
Jamie Soward played 232 first grade rugby league matches in Australia and England including 141 for the St George Illawarra Dragons with the highlight being a premiership for the club in 2010. Soward was a consistent threat at five-eighth and his goalkicking added to his credentials. He was selected to play for New South Wales in 2011 and also represented NSW Country and the Indigenous All-Stars. Post-playing career Soward has been an astute reader of the game with media stints for Fox Sports, Channel 9, 2GB and Macquarie Radio as well as the Sweet and Soward podcast.

Melbourne Storm legend Cameron Smith has given former teammates Cameron Munster and Brandon Smith a whack for their part in the white powder scandal, suggesting they had tarnished the club’s legacy. Smith, who retired with a record 430 NRL games behind him, was scathing of the behaviour of Storm trio Munster, Smith and Chris Lewis […]