Cleary was put on report in the Panthers’ 10-6 preliminary final win over Melbourne and faced the prospect of being banned for the decider if he copped a grade-two charge.

However, Penrith’s worst fears were alleviated on Sunday morning with Cleary not even appearing on the charge sheet.

Fisher-Harris’ charge is of note for slamming Felise Kaufusi down late in the first half, after it forced an error but did not attract a penalty.

Instead, Melbourne hooker Harry Grant is the only man facing a one-game ban out of the match, for a crusher tackle that will see him miss round one.

It comes after both Cleary and his father Ivan played down the severity of his lifting tackle on Saturday night.

“There’s always a bit of stuff around that … it’s just another story I guess,” Nathan Cleary said about his report.

“I’d rather not (face the judiciary) but we’ll see.” 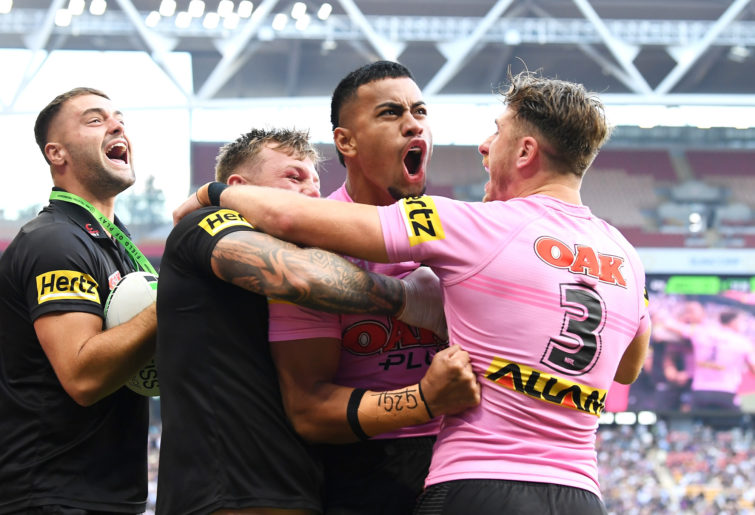 Stephen Crichton of the Panthers celebrates with his teammates after scoring a try. (Photo by Bradley Kanaris/Getty Images)

The news will be a relief for Penrith but they still have some concerns in grand final week and a shot at redemption after last year’s loss in the decider.

Cleary has battled a shoulder injury for the back half of the year and will need surgery at the end of the season.

The Panthers have also paid the price for having to reach the grand final the hard way after their week-one loss to the Rabbitohs.

Moses Leota is battling to overcome a calf strain, while James Fisher-Harris (knee) and Tevita Pangai Jnr (knee) both picked up knocks against Melbourne.

“Especially after that Parra game last week, it was just such a bash up and there were a lot of people sore and sorry on the Monday morning,” Cleary said.

“Just to get everyone on the field (against Melbourne was massive.

“Tevita will be fighting the clock next week.

He’ll probably get scans to see what it’s like but I’ve got full faith in our medical team and the boys they’ll do whatever they can to be on the field.

“Fish (Fisher-Harris) is Fish, he’s one of the toughest guys out there and again he’ll be doing everything he can to get on the field.”