The All Blacks posted their “ugliest” win with a last-ditch penalty goal as debate raged over the Springboks’ “anti-rugby” DNA in the 100th Test between the two rugby juggernauts in Townsville.

Jordie Barrett’s pressure penalty kick less than three minutes from the end gave the All Blacks a hard-fought 19-17 win to entrench their No.1 world ranking and secure The Rugby Championship with a game to spare.

But it was the no-frills Springboks approach under coach Jacques Nienaber that once again was the major talking point with Kiwi critics scorning their predictable game plan while their South African counterparts described it as a “a win for the Springboks.”

South Africa have won two of their five matches in The Rugby Championship – both against winless Argentina – to lie third behind the All Blacks and the Wallabies with the final return game to play against New Zealand on the Gold Coast next Saturday.

“There have been some pushing the line that this 100th rugby Test between the All Blacks and Springboks in Townsville was some sort of contest of good versus evil. A kind of Luke Skywalker battling Darth Vader in rugby boots,” argued Marc Hinton in stuff.co.nz.

“And that the entertaining, free-flowing approach of the New Zealanders had to prevail for the good of the game.

“Absolute bollocks. Styles make fights, they say in boxing. They also make rugby bloody interesting. And you don’t get two more polar opposite approaches than that of the two sides who went at it in the tropical heat of north Queensland.” 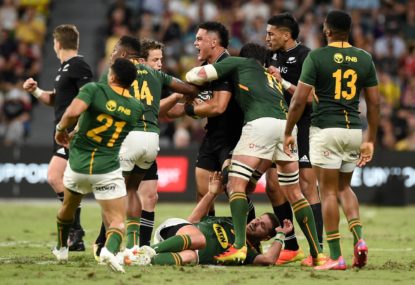 “Against all the odds, the All Blacks won an arm wrestle against the Boks,” Gregor Paul wrote in the New Zealand Herald.

“They got sucked into a style of game they didn’t want to, were forced into playing from set-piece to set-piece, unable to build any momentum or control the tempo, and yet they delivered the win.

“It was the ugliest win they have enjoyed this year and one which exposed a few cracks and issues, but no one should lose sight of the fact that they won.”

Richard Knowler in stuff.co.nz lashed South Africa’s approach as “predictable, boring and a blight on the sport at international level.”

“Even as critics poured scorn on the Springboks’ dull tactics against the All Blacks, Jacques Nienaber remained unrepentant.

“If Jordie Barrett hadn’t kicked a long-range penalty to give the All Blacks victory over the Springboks, Nienaber could have had a pop at his detractors by saying the scoreboard was proof of why he must stick to his kick-heavy game plan.

“But the Springboks lost. Not only that, they refuse to deviate from a strategy widely regarded as predictable, boring and a blight on the sport at international level.

“The All Blacks won’t be fooling themselves. They know nothing will change for the re-match on the Gold Coast next weekend.”

“This was rugby at its most primitive, with Faf de Klerk often kicking bombs from only 30 metres out from the All Blacks’ line, which more often than not were collected under pressure by Jordie Barrett,” Wall unloaded.

“[Winger] Makazole Mapimpi may as well have left after 15 minutes and made sure the beer and chips were ready for the after-match function.

“To be fair, so too should a number of the All Blacks. It’s been a long time since they were forced to play for such an extent between the 22s and it showed, with passes shelled, shocking discipline and just a general lack of patience.”

Predictably, those New Zealand views were not shared by their colleagues in the South African media, who lauded the Springboks for competing with the All Blacks in an arm-wrestle and taking them all the way to a last-ditch finish.

“There were no frills or fuss, this was about brutal, belligerent Springbok rugby. The pack was a weapon. The kicking boot an ally. It was back to basics!

“Yes, it wasn’t enough in the end, with the All Blacks snatching defeat at the death as they so often do but, in all but on the scoreboard, this was a win for the Springboks.”

Don't think the Bok kicking game worked?
All Blacks had 16 handling errors, 23 turnovers.
When last did you see that in an All Black test.
When Boks played too much rugby – in the last 10 – they gave away the crucial turnover.
Boks enemy not kicks, but 16 penalties given away

Nel wrote on Super Sport: ”The Boks were far better than they were in the two Tests against Australia but will be kicking themselves as they had done enough to win.

“But for all the positive play, the one negative remained the scoreboard, and it meant the Boks have now lost three in a row, and their Rugby Championship title.

“And that will hurt a lot more.”

IOL’s Wynona Louw said it was no doubt that the Springboks’ performance was a step-up from their double losses against the Wallabies, but perhaps the worst thing about the game was knowing that they could have won it.

“This game was always going to be massive. Apart from it being the 100th meeting between rugby’s biggest rivals, the Boks’ recent results made this one crucial for South Africa. Jacques Nienaber’s men had to save face, they had to pay respect to the opportunity and, of course, their title as world champions.

“And they did, but they will feel this agonising 17-19 defeat.

“The Boks went back to South African basics and didn’t only hold the Kiwis, they beat them in many aspects. Their pack was solid and Siya Kolisi led in stunning fashion as he produced an absolute blinder. It wasn’t all good, though.

“At times the Boks’ decision-making was questionable, while their defence – although a bit better than in the last two outings – was again an issue.

“There were moments not capitalised on when the opportunity presented itself, and for all the good they did, they could have capitalised more from this performance.”

The IOL’s Ashfak Mohamed said both teams cancelled each other out.

“It was a battle of two contrasting styles in the closing stages, with the Boks sticking to their box-kick and rush-defence tactics, and the All Blacks looking for ball-in-hand, broken-field opportunities,” he said.

“They virtually cancelled each other out, until the South Africans conceded a breakdown penalty that Jordie Barrett slotted with minutes ago to put the Kiwis ahead.”