We might be only six rounds into the new season, but the Premier League has a number of exciting stories unfolding. The top four is looking like it could go all the way down to the wire, newcomers are fighting hard to avoid a relegation battle and old rivals like Arsenal and Tottenham are battling for bragging rights. It was another great weekend of action with lots to talk about.

There was plenty of talk ahead of the Chelsea vs Man City game about how Thomas Tuchel had mastered beating Pep Guardiola’s side, given Chelsea had beaten Man City three times in 2021 – including the Champions League final.

Tuchel has also helped Chelsea become an almost unbreakable wall in defence, with his side registering 15 clean sheets and conceding only 14 goals in the Premier League since January.

But this weekend, Guardiola reminded the league he is much more than a good handler of super stars – he’s a genuine tactical genius. He set his side up perfectly to take on the Blues at home, with Rodri playing a great game in midfield where he was able to knit the whole team together seamlessly.

The way Man City pressured Chelsea, especially as the the home side tried to play their way out of defence, showed how carefully Guardiola had prepared his team – and Chelsea couldn’t cope.

It was somewhat alarming that a team as good as Chelsea couldn’t adjust and the fact they weren’t able to fire a single shot on target in the 90 minutes will give Tuchel something to think about.

Having earned a crucial three points, Man City continue a crucial week as they travel to take on Paris Saint-Germain in the Champions League before heading to Anfield to go up against Liverpool in the Premier League at the weekend.

A win in Paris isn’t essential, but it would be useful. A win over Liverpool would really help their Premier League aspirations and six points from away games against their title rivals in the space of seven days would put them in a great position.

Could Nuno Espírito Santo be the first managerial casualty of the season?
The season is only six games old, but already there is talk about a change in management at Spurs after Nuno Espírito Santo took responsibility for his side’s dire performance against their North London rivals, Arsenal.

The Gunners had won the game before half time with three goals that would have delighted their fans. The passing and build up play sliced the Tottenham defence to pieces and Spurs had absolutely nothing to offer in return.

Harry Kane is having a poor start to the season – he’s goalless after six rounds and has only managed four shots on target and zero assists. While the England striker has attracted plenty of criticism for his blunt attacking form, it’s important to note he’s not being provided with any high quality service at the moment.

Time and again, the Spurs approach was to play long balls from defence and hope Kane could somehow create a chance. The midfield was missing in action and, as Tim Sherwood explained for Optus Sport, “they’re not brave enough to play through the midfield areas. The biggest damning stat I saw today is that Tottenham side have run less than any team in the Premier League. They haven’t got any energy.”

Former Liverpool legend Graeme Souness didn’t hold back when asked about Tottenham’s performance. “Spurs in that first half were shocking, Arsenal were fabulous. But Spurs? Shocking. I was surprised how bad they were.”

With Tottenham having lost their past three games by an overall score of 9-1, Santo is coming under pressure. Steve Sidwell, former Premier League midfielder for Chelsea, Aston Villa and Brighton feels coach Nuno is struggling to connect with his team.

“When I look at Spurs, I just don’t see a chemistry between the squad and manager,” he said.

From Aaron Ramsdale to Pierre-Emerick Aubameyang to the back of Tottenham's net in 15 seconds.

Brentford spoil Liverpool’s day as Mo gets another record
Jurgen Klopp will have some thinking to do as he plans his team to play Man City next weekend after Brentford made his usually solid back four look like a nervous bunch of kids.

Brentford – newly promoted this year – showed their fans won’t need to worry about a relegation battle and are becoming an away trip that even the top teams will be nervous about.

Liverpool took the lead twice, but Brentford never stopped their direct style of attack and kept up their pressure game on the Reds defence. The approach kept working and twice the home side came from behind and richly deserved their point from the 3-3 draw.

Mo Salah picked up another record in his long list of achievements as he became the fastest player to reach 100 top flight goals for Liverpool.

But it was Brentford’s players who were celebrating after the game as they kept finding ways to trouble the Liverpool defence.

Former Liverpool winger Steve McManaman gave credit to the performance from Brentford saying, “Liverpool, for the first time in a long time, looked really vulnerable at the back today. Every time the ball went forward, the Brentford players caused all kinds of panic in the Liverpool defence and they totally deserved a result.”

It’s worth noting Brentford only had 32 per cent of the possession and, when they did have it, they didn’t sit back and try to cling onto their early goal lead. They kept pressing forward and finding ways to cause problems for one of the best defences in Europe.

As mentioned, Liverpool will welcome Man City to Anfield in the next round and Klopp will be wondering if he needs to make some changes at the back. If the likes of Brentford can cause such chaos among his back four, what can a side like Man City do?

Solskjaer’s complaints can’t distract from worrying week at home
Aston Villa piled the pressure onto Manchester United as they managed to sneak a 0-1 win over the Red Devils just days after Ole Gunnar Solskjaer’s men were knocked out of the Carabao Cup by West Ham.

Despite having had over 60 per cent of the ball and 28 shots on goal, United could only create four genuine shots on target and paid the price for their lack of accuracy as Villa scored a goal with just two minutes to go. Solskjaer would complain that the goal was offside, but the reality is that his side were wasteful with the opportunities they created.

The lack of goals for the first 88 minutes was suddenly replaced by incredible tension as first Villa went ahead, before the home were given a penalty in the 93rd minute for a handball.

Bruno Fernandes, however, sent the ball into orbit and as it flew over the crossbar. Fans and pundits alike could be heard asking why Cristiano Ronaldo didn’t take it.

For all the attacking talent in the Man United stable, the focus should really be on their defence – which has struggled at home. They’ve conceded in every one of their last eight Premier League games – their worst record since 1972!

Former United midfielder, Owen Hargreaves, feels Solskjaer has to use his attacking flair with more confidence next time. “Play more attackers. Control the ball. Get closer to the opposition’s goal. Kill teams off,” was his recommendation.

From brain surgery to celebration – Raul Jimenez is back!
In November 2020, Raul Jimenez suffered a skull fracture and was told by doctors it was a miracle he had survived the injury.

Ten months later, Jimenez scored his first Premier League goal since the injury and secured a crucial three points for Wolves that raised them out of the relegation zone.

Opponents Southampton will be disappointed with the result – with 60 per cent of the possession and six shots on target they really shouldn’t have lost this one. But as happens so often, the game finds a way to delight us with a magical moment that defies the statistics.

The Saints still haven’t won a game this season and have only managed four goals from the opening six rounds. This is cause for some serious concern.

The way Jimenez scored the winner in the 61st minute was quite beautiful – he stepped and swerved his way through the Southampton defence before finishing perfectly to send the away fans wild.

Raul Jimenez has his first Premier League goal in 336 days, and it means everything ????

The cut inside. The feint. The finish. The emotion. Glorious.

The Premier League and European competition qualification aren’t secured in the opening six rounds and there is a long way to go in the season. But we’re starting to get a feel for some of the themes that we’ll keep seeing week in week out. Do we really have a top four competing for the title or will one or two of the pretenders drift away?

Can teams like Brighton and Everton hold on to their top ten spots or will they stumble? Do we already know the teams who will be scrapping it out in the relegation zone all season or can one of them put together some results to climb their way to safety?

With another round of European club competition this week and some more interesting Premier League fixtures lined up for next week – including Man City at Liverpool – there will be plenty to talk about in seven days time.

Takumi Minamino should have buried this! 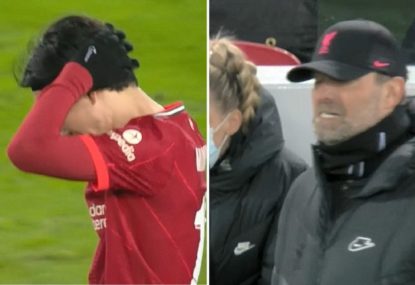