The Roar
27th September, 2021
1
Join the conversation
Advertisement
Write for The Roar

However, the NRL’s ruling was made prior to the 19-year old’s arrest on the Gold Coast on Saturday night, and public admission to being in possession of cocaine.

Rather, Walsh’s two suspensions during the year, the first for striking against the Cowboys in Round 12 and the second for his part in the Warriors’ Round 25 melee with the Titans, have cost him the medal.

The budding superstar won the Rugby League Players Association’s counterpart award, which does not take suspensions into account.

Walsh will not attend tonight’s ceremony, to be held at the Howard Smith Wharves in Brisbane.

Sydney Roosters young gun Sam Walker is the new favourite to be crowned Rookie of the Year, after finishing runner-up to Walsh in the RLPA voting.

Walsh fronted the media in an emotional press conference on Sunday after news broke of his arrest.

“I was told by officers last night to move on. I didn’t move on which led to me getting arrested and taken back to the police station,” he said.

“Once I got back to the police station I was searched, and I was in possession of a small bag of cocaine which I had some of during the night.

Credit to Reece Walsh. A teenager who stuffed up. Knew it. Fronted and apologised. Well done to the young guy and the @NZWarriors

Walsh has been signed to a three-year deal with the Warriors, and is set to become their long-term fullback after captain Roger Tuivasa-Sheck crossed codes to New Zealand Rugby. 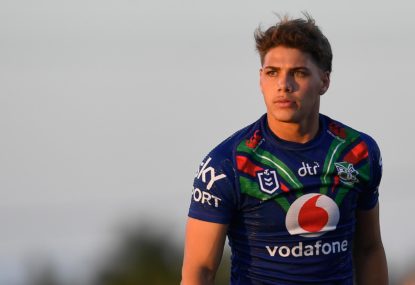