While the grand final holds no fond memories, the Dragons’ unlikely run to the decider from seventh place is among my favourite memories as a Saints supporter.

Older Saints supporters will have fond memories of the 1970s and a lucky few will have witnessed the amazing hegemony of 1956 to 1966. In my mind, only the long-awaited 2010 premiership trumps the unlikely journey of ’96.

It all started with an elimination final at the SFS on the afternoon of 7 September. A fading, but still formidable, Canberra team stood in the Dragons’ way.

The Raiders were missing Ricky Stuart, Brad Clyde and Jason Croker but still boasted Laurie Daley, Brett Mullins, Steve Walters and most of the forward pack from the 1994 grand final.

The Dragons were not devoid of quality, with Anthony ‘the Man’ Mundine, a gloriously hirsute Nathan Brown and State of Origin representatives like Wayne Bartrim and the much less hirsute David Barnhill.

This Saints supporter expected to witness the season’s last rights. Turns out it was the beginning of something wonderful.

The Dragons jumped out to an early lead thanks to a brilliant solo try by Wayne Bartrim. But the Raiders had pegged them back to 8-8 by halftime.

A Brett Mullins try just after halftime put Canberra in front 14-8 and their lead held for the following 25 minutes. A Bartrim penalty made it 14-10 but with less than ten minutes to go, it wasn’t looking good.

In the end, it was a trick shot executed to perfection by Nathan Brown and Anthony Mundine that broke Canberra’s resolve.

That Dragons team were one of the last I can recall who used the mouse-trap play.

In the 72nd minute, Brown went to dummy half with the Dragons attacking the Canberra line. He took off to the left of the ruck but left the ball behind for Mundine to scoop it up and head right. Canberra’s defenders had all started moving to their right. Mundine skipped past Luke Davico and saw the overlap. Mark Coyne drew the last defender and Mark Bell crashed over in the corner.

Wayne Bartrim had a kick from the right-hand touchline to put the Dragons in front with five minutes to go. It looked like Bartrim kicked as much turf as ball, but somehow the draw from right to left was perfect.

The result: 16-14 Dragons and they held on to fight another day.

Awaiting the Dragons in the next round were the then-Sydney City Roosters of Brad Fittler and Andrew Walker.

The events of 15 September at the SFS were beyond the wildest dreams of this Saints supporter. I don’t mean to be unkind, but Mark Bell, Adrian Brunker and Nick Zisti were all journeymen players. That afternoon, they were giants.

The Roosters dominated the opening ten minutes and led 4-0. A Mark Bell try from a Mundine kick after 12 minutes opened the floodgates.

When Mundine and Noel Goldthorpe weren’t zinging passes from one side of the field to the other, they were putting in precision cross kicks. Bell and Brunker both scored doubles. While Zisti wasn’t on the scoresheet, he caused plenty of problems for the Roosters’ outside backs. 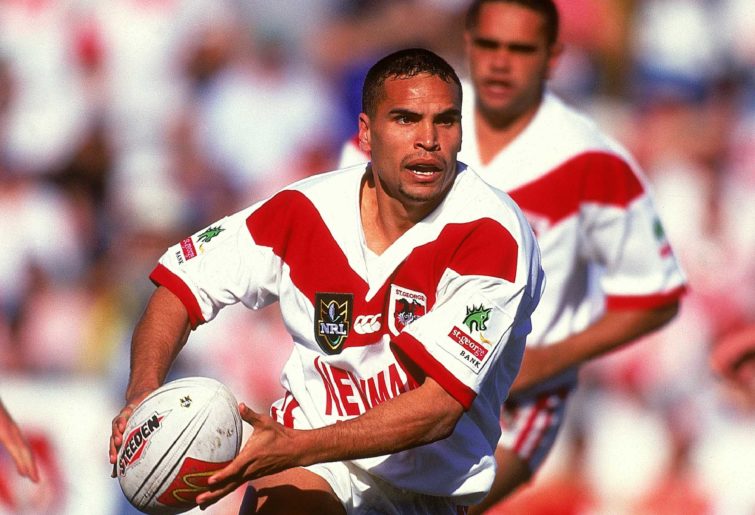 The result: 36-16 Dragons. It was a remarkably good performance from a team that had been only slightly above average during the regular season.

A very strong North Sydney Bears team now stood between the Dragons and the grand final.

Billy Moore was recently interviewed by ABC Radio and asked about his favourite finals memories. I thought it was a little cruel to ask this of a former Bear.

Moore mentioned that the Bears felt 1996 could be their year. Their defeat to the Dragons represented the opportunity that got away; the one that hurt the most.

One can empathise, without necessarily sympathising.

The Bears had good reason to be confident. They’d beaten the Dragons 42-0 earlier in the season. This, though, was clearly a different Dragons team.

After withstanding some early Bears pressure, Dean Raper’s sixth-minute try put the Dragons in front. They never looked like losing from then on.

The decisive moment in the match was Anthony Mundine’s Lord of the Rings try.

In the 51st minute, Mundine collected a Wayne Bartrim offload just inside his own half and accelerated into a gap. Somehow, he ran away from a phalanx of Bears defenders, converging on him like Tolkien’s black riders pursuing Frodo and Arwen on horseback.

We all know what happened next. The dream was ended by a ruthless Manly side at the SFS one week later.

The Manly team of 1995 to 1997 had an aura. They were tough as nails but with an unpredictable flair, epitomised by the likes of Cliff Lyons and Steve Menzies.

I suspect most people who aren’t Manly supporters remember the 1996 grand final for David Manson’s controversial decision to not call Matthew Ridge held in the lead-up to Steve Menzies’ try late in the first half.

Ridge ran an extra 20 metres before being tackled and a disjointed Dragons’ defence was torn apart by Nik Kosef and Menzies on the next play.

Is there a different outcome in a parallel universe where Manson called Ridge held?

David Middleton’s 1997 rugby league yearbook describes it as a game-turning moment: “At 8-2, Saints were well in the picture, but down 14-2 at halftime, recovery appeared improbable.”

I have my doubts. Manly would probably still have been too strong.