Jean de Villiers, the former Springboks captain who defeated the All Blacks nine times, has called on South Africa to use some ambition as the Springboks take on New Zealand in the final game of The Rugby Championship on Saturday.

De Villiers called the kick heavy tactics of Jacques Nienaber “disappointing” in an interview this week as the Springboks continued to receive criticism for a game plan that saw them kick the ball away 38 times – more than they averaged against the British and Irish Lions in a series that has been derided by pundits all over the world for being boring.

When asked about how his own side had managed to beat the All Blacks, de Villiers explained that the kicking tactic was useful but only as one aspect of a successful game plan. “It was about using the kicking game to get into the right positions on the field and then using some ambition with attacking play to capitalise on that,” said de Villiers on The Breakdown on Sky Sport NZ.

Unfortunately, the Boks didn’t play with that ambition even when opportunities were created. They passed just 66 times in the match, made just two clean breaks and offloaded only once.

De Villiers is not the only person calling for a change to the South African tactics with some pointing out that not only is it boring, but it’s not effective either.

Kiwi journalist Ben Smith, writing on Rugby Pass, commented this week that their style is “clearly one-dimensional and is not that reliable, going 2-2 when kicking more than 35 times since that semi-final in the World Cup.”

It’s worth noting as well that the repeated statement from the Springboks that the kicking game is in their DNA, doesn’t stand up to scrutiny, or at least doesn’t hold up as a defence for sticking with the same game plan.

Against the All Blacks they kicked 38 times and struggled to create opportunities to score tries. When they played England in the 2019 World Cup Final, they kicked just 24 times, scored two beautifully worked tries finished by wingers in full flight and beat England by 20 points. 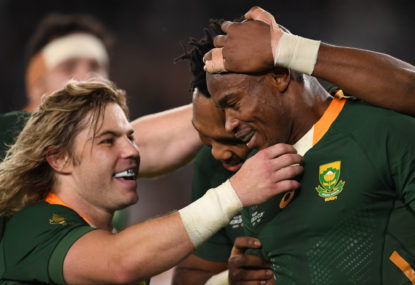 The Springbok winger Makazole Mapimpihas is a serious threat when given some space. (Photo by Kaz Photography/Getty Images)

Success isn’t far away
Despite the criticism, there are those who feel that the Springboks still have the ability to challenge the All Blacks in this weekend’s clash.

De Villiers believes that the kicking game shouldn’t be replaced but instead the Boks need to add in some ambition and other attacking threats to challenge New Zealand.

“If they did that, they would have won the game, and then the strategy would have executed perfectly. It’s the lack of having that little bit of variation that I think is costing them in the big games” suggested de Villiers.

They don’t have to look too hard for these attacking options either. Faf de Klerk is so much more than a box kicking wonder and his ability to snipe from around the breakdown can surprise any defence. Then you’ve got the likes of Damian de Allende who can be more than just a wrecking ball in midfield and the pace of Makazole Mapimpi that will leave most defenders for dead if he’s given some space.

Curiously, there are also some who feel that the closeness of the result against the All Blacks last weekend is clear evidence that the Springboks approach is working already.

Ben Smith suggested in an article this week that “tactically, the All Blacks were outplayed in many aspects of the game, including up front,” and that “the game plan did put the handbrake on the All Blacks, forced them to play perhaps their worst performance of the modern era”.

Others have pointed out that by focusing on contesting the All Blacks’ line out, maintaining an effective defence and using the highball, South Africa were able to gain good ground and score a well taken try.

Keeping the All Blacks to under 20 points and only losing by two points at the depth doesn’t sound like a game plan gone horribly wrong does it?

“I thought the game plan worked. I thought we had opportunities,” he commented this week.

Nienaber backed up his commitment to the same style by making just the one change to his starting XV for this weekend’s Test with Ox Nche replacing the injured Frans Malherbe in the front row.

Whatever your point of view on the tactics South Africa use, last weekend’s game went down to the final kick of the game and the Boks were two minutes away from defeating New Zealand.

If this second game between the two can be just as tense, then it promises to be a dramatic climax to this season’s Rugby Championship.