The start to life in the Champions League couldn’t be going much better for Moldovan club FC Sheriff, who have produced one of the biggest shocks in the competition’s history.

Thill netted with a powerful shot into the top corner from the edge of the area to give Sheriff their second consecutive victory in European soccer’s top club competition.

EXTRAORDINARY ???? A rocket from Thill secures a monumental victory for Sherrif over Real Madrid at the Bernabéu.

They lead Group D with six points, three more than Real and five more than both Shakhtar Donetsk and Inter Milan, who drew 0-0 in Ukraine earlier on Tuesday evening.

Sheriff beat Shakhtar Donetsk 2-0 in their opener at home, while Madrid won 1-0 at Inter on Matchday 1.

Sheriff – founded in 1997 – are the first club from the Moldovan league to qualify for the group stage of the Champions League, although they are based in the breakaway region of Transnistria, a self-proclaimed independent nation which isn’t recognised by any United Nations member state.

The visitors had rarely threatened until opening the scoring after a breakaway in the 25th, with Jasurbek Yakhshiboev finding the far corner with a firm header past Madrid goalkeeper Thibaut Courtois.

Sheriff’s Greek goalkeeper Giorgos Athanasiadis was named the player of the match for denying the likes of Karim Benzema, Vinicius Junior and Eden Hazard as the hosts had 30 attempts at goal but could only score once.

“I’m a little sad as I think we deserved to win,” Real coach Carlo Ancelotti said.

“You could say we had bad luck, we lost the game on the small details, they scored their goals on the counter-attack and from a throw-in.

“We had a lot of shots at goal but sometimes luck deserts you in games.

Real dominated in both halves but needed a penalty to level with Benzema on target in the 65th after a VAR check for a foul on Vinicius Junior inside the area.

Thill secured the victory near the end with a booming first-time effort to become the first player from Luxembourg to score a goal in the Champions League.

Sheriff players celebrated loudly after the final whistle as many Real fans jeered their team. 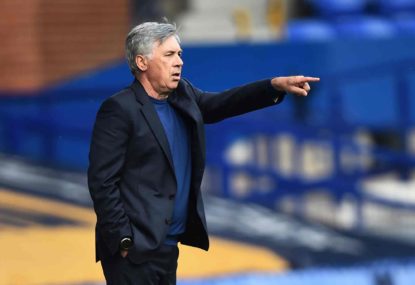 It might only be the second round of group stage matches, but the Champions League has delivered an incredible night with results that will go down in history.