Will there be two sets of slippers under the table at number 10?

It was a strange day in Townsville, one in which the main course was served before the appetiser – at least in rugby terms. The historical 100th heavyweight contest between New Zealand and South Africa rightly held centre stage in the penultimate round of the Rugby Championship.

The teams featuring the two most efficient lineouts and scrums in the competition, and the least active time of possession duked it out to a deadlock. Eventually the All Blacks edged a split decision, but they cannot be feeling entirely happy after playing the contest out largely on Springbok terms.

It was point-to-point, stoppage-filled rugby – even if the dramatic tension was unbearable at the end.

Coming on after the main event, the Wallabies had the opportunity to take another step forward against a resolute but limited Argentina side – and take it they did. The Wallabies were always able to keep the Pumas at arm’s length on the scoreboard, and they ended up clearly ahead in the balance of territory/possession (60 per cent), clean breaks made (10-0) and defenders beaten (31-10).

Despite the relatively high penalty count (24), English referee Matt Carley once again implemented a clear breakdown policy (10 penalties for the attack, and four for the defence) which helped generate a lot of very quick ruck ball. The Wallabies created a number of opportunities which they failed to finish off.

“It was a pretty fast first half,” Dave Rennie said afterwards.

“We got a lot of really quick ball and felt the Pumas were just hanging in. They were able to control the ball and the pace of the game in the third 20 and that made it difficult for us to put the foot on the throat.

“We were probably lucky to get a couple of penalties turned over which helped us wrestle momentum back but first time we got back down their end in the second half we should have scored but we only got three points for it.

“We had a number of line breaks late in the game where we give it to the guy next to us and we score. In tight games we’ve got to be clinical and that’s something to look at.”

The most pleasing aspect of the ongoing ‘Rennie-vation’ of the Wallabies is how quickly depth is being developed in most back-line positions. There are now two sets of slippers sitting under nearly every chair at the table from numbers 9 to 15.

A midfield which looked threadbare at the end of the Bledisloe Cup series is now looking well-stocked with the return of James O’Connor as the principal back-up to Quade Cooper at number 10, and a potential alternative to Len Ikitau at number 13 and Reece Hodge at fullback. Add Hunter Paisami and Jordan Petaia to the mix, and you are on to something.

“It’s obviously great for Rabs [O’Connor] to be back in the Test arena – he’s missed out on every Test this year through injury so he’ll take a bit of confidence out of that,” Rennie said.

The ability to double up your threats, and create an authentic one-two punch off the bench is one of the keys to sustaining pressure on your opponents in the modern professional game.

In last Friday’s Coach’s Corner column, I outlined how the presence of Samu Kerevi at number 12 has increased the effectiveness of Marika Koroibete.

Before the last round of the Rugby Championship, Kerevi had the most runs in the competition (47) ahead of Koroibete in second place (33); Marika had 14 tackle breaks (second overall) to Samu’s 13 (third); Kerevi ranked first in offloads (six), his partner in crime was just behind on five.

The need to account for not one, but two top-drawer power backs, makes a huge difference to the priorities on defence.

The threat of Koroibete on the left forces the Argentine right wing to stay honest and keep his width, and that opens a gap for Kerevi to run in between two forwards underneath him. At the end of the play, it is Marika who is marking the ruck over the top of Samu after the break.

Two phases later, the threat of Koroibete created a try for Reece Hodge.

Marika has run all the way from the ruck on the left to appear outside Hodge on the right, and that draws two Argentine defenders away from the Australian fullback. He is left with a one-on-one that he is well-equipped to win. 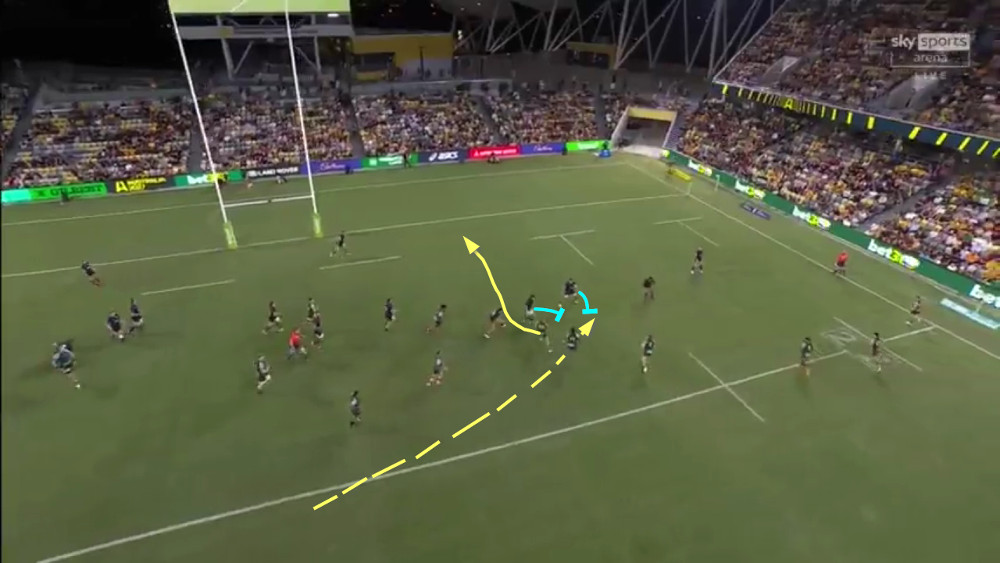 Australia run this kind of shape repeatedly, with Samu looking to hold the inside defence, and Marika scanning for the right moment to insert himself into the line, on the opposite side from his natural wing.

It creates doubt in the mind of the defender. In the following instance, the Argentine number 13 is checked by the presence of the two K’s around the ball, and that leaves him slightly late moving off on to Len Ikitau, with Hodge and Andrew Kellaway beyond him. 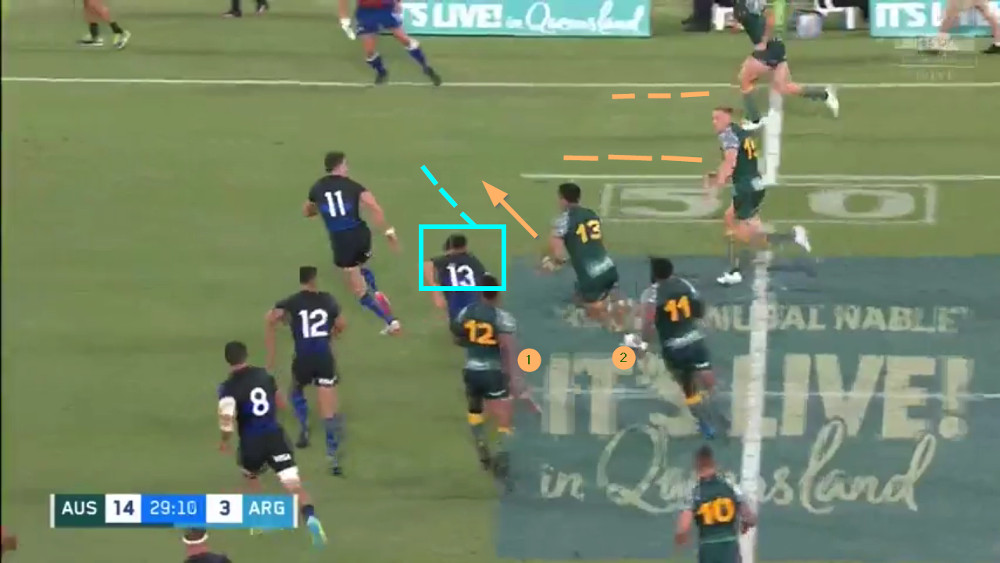 On occasion, just one of the two K’s was enough to create a similar opportunity on the edge.

Two defenders are unable to prevent Samu Kerevi getting the ball away in contact, and that leaves Lucio Cinti Luna rooted to the spot. 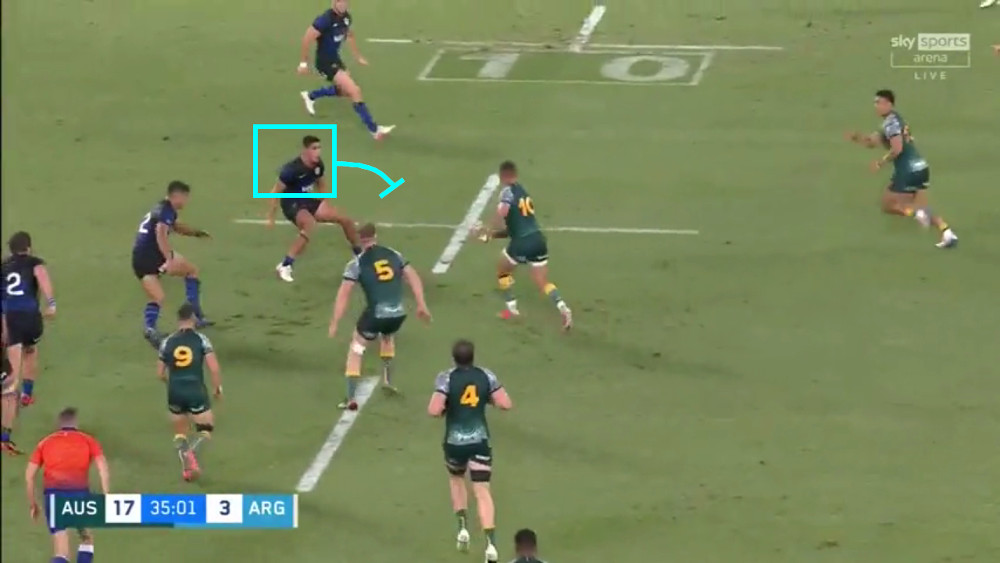 The power of Kerevi and Koroibete can be used just as well to convert dominant tackles to winning counter-rucks on defence.

In the first example from the game versus South Africa, Kerevi adds his weight and the Wallabies get over the top of the ball-carrier, in the second he pulls out into the line – but the threat is still unmistakably there.

The presence of James O’Connor on the bench behind Quade Cooper not only sustained the pressure on the Argentine defence, it amplified and doubled down on it. Cooper varies his positioning better and is more potent on attacking kicks. 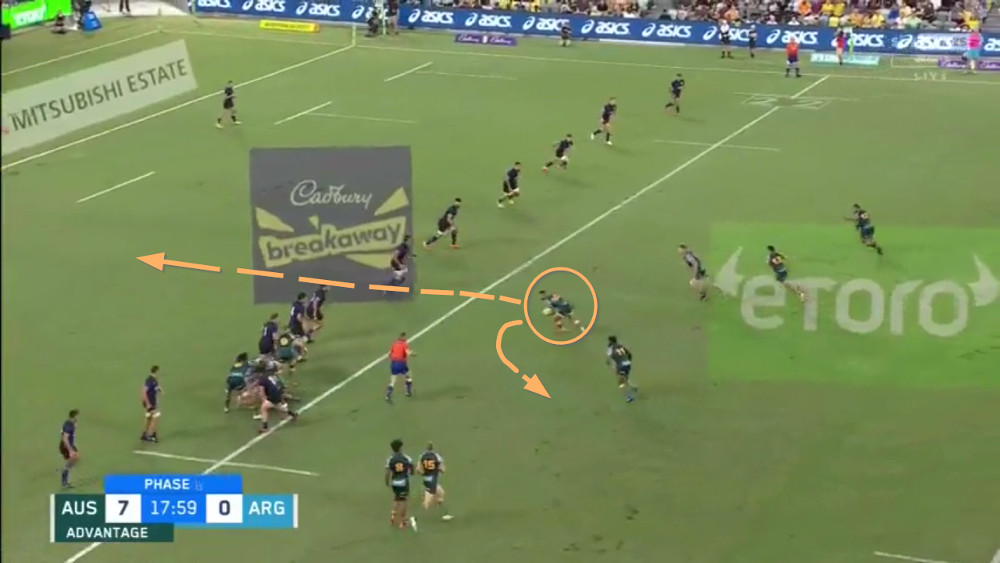 When the first receiver is standing this flat to the line, it usually means only one of two options – either the kick through or an in-pass to a waiting player from the back three (Koroibete, again). In this case the kick towards the posts is beautifully-weighted for Ikitau to pick up and Kerevi to convert into a score.

O’Connor plays on the advantage-line for more of the time, and that means the defence is under constant pressure to regroup quickly around the ruck in the last quarter of the game.

With refereeing which gets the tackler out of the way quickly and produces a succession of rapid-fire ruck deliveries, the presence of a first receiver like O’Connor attacking so close to the gain-line – play-in, play-out – can quickly make close defence intolerable for the opposing forwards.

That was the final nail in the coffin for Argentina, but if Australia had converted more of their chances, it could have been much, much worse.

The virtue of the squad depth Dave Rennie is developing with the Wallabies is not just a matter of being able to replace one good player with another when injury strikes. More, far more, it is a case of multiplying existing threats and increasing the pressure as the game enters its final stages.

The presence of Samu Kerevi and Marika Koroibete in the same starting XV makes both players much more effective than they would be in isolation. The defence cannot key on just one power runner, now it has to split its focus. When both are on or around the ball, offensively or defensively, that means trouble for the opponent.

The Wallabies are now able to double down at number 10 with James O’Connor coming off the bench to replace Quade Cooper. The presence of Tate McDermott and ‘Rabs’ means constant pressure on the reloading and positioning of forward defenders at ruck-side, at a stage in the game when they are least able to manage the effort.

The historic 100th match between the All Blacks and Springboks may have been the main course and attracted all the attention, and rightly so. It did represent a contest for the title of ‘the best side in the world’ on current form. Looking towards the future, and the World Cup in 2023 the appetiser may prove to be the tastier morsel.

Both the men in black and their counterparts in myrtle green may be looking over their shoulders at the green-and-gold with a worried frown, come France in 2023.”