It started with a lunchtime catch up with a few sneaky beers in hand, and escalated to Greg Holmes becoming Australian rugby’s answer to Steven Bradbury, sliding on through to take his place in the Test squad to face Argentina on Saturday.

Holmes will be 38 years, 113 days old when he pulls on the gold jersey for the first time since his 27th, and what he presumed to be his final cap in 2016, making him the oldest Wallaby since the second World War, and oldest of the professional era.

Thanks to Covid, child birth, injury and the left field and inclusive thinking of Wallabies coach Dave Rennie, the affable and popular Holmes had a moment to cherish this week when his name was read out in the 23 for this weekend.

“It’s pretty amazing,” Holmes said on Thursday after the team was made public.

“It almost feels like it’s my first cap again. When I left in 2016, I thought that was it with playing for my country. And a chance meeting with Dave and things panning out – Allan having a kid, a couple of injuries – and all of a sudden they need someone to fill in.

“I put a lot of work in the last two weeks to get myself up to speed.”

The first step for Holmes was returning from his four years with Exeter in England to play for the Western Force in Perth last season. 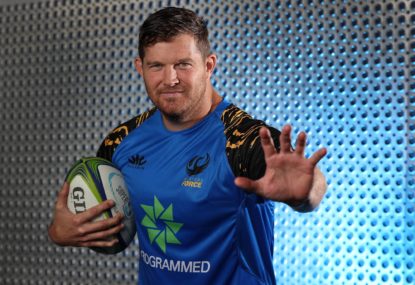 When the Wallabies gathered in Perth for the third Bledisloe Cup match they attended a lunch alongside members of the Force.

“I’ve been doing a bit of coaching with the Force and I asked Dave if it was possible that I could come and watch some of the unit sessions and take a few notes around the coaching,” Holmes said.

“I had a missed call a couple of days later and I thought it was around the coaching and it turns out they had a few other injuries and a few other issues going on at tight-head and he asked if I could come in and help out for a month.

“I obviously jumped at the chance, I was still ticking over and doing a bit of training. The passion was still there for me, I’m still keen to play and here we are.”

The selection says a lot about Rennie’s foresight as well. Before the Bledisloe kicked off he took Quade Cooper for a coffee and a month or so later Cooper ended his long Test absence by kicking Australia to a famous after the siren win over South Africa.

The coach knew Allan Alaalatoa would miss games due to childbirth while Pone Fa’amausili was battling injury. The situation was complicated for Rennie with Covid restricting the flow of players into the bubble from NSW and Victoria.

“He’s played good footy for the Force and that’s put him in the position where he is now,” Rennie said Thursday. “We’re rapt for him.”

Rennie revealed the beautiful moment where Holmes found out he was back in the big time this week.

“I didn’t tell ‘Homer’ he was in the mix so he was already applauding for the guy he thought was on the bench, and got a bit of a shock from it,” Rennie said.

“There was a massive roar from the lads because he’s such a popular character. It’s not a sentimental selection – it’s based on what we need and we think he can do a job for us.

“He’s as surprised as anyone but it’s pretty cool.”

Holmes was surprised, but had harboured hopes of a fairytale return.

“When I came back into camp I knew with Allan having his baby and having to drop out and Pone trying to get over his hamstring injury, I knew there weren’t a lot of tightheads in the squad,” Holmes said.

“I’ve been pretty fortunate in that way to be able to enter the squad. I hadn’t been doing a lot of training, I was ticking over with the Force because we were leading into pre-season, but I knew over the past two weeks if I could get myself going pretty quickly I’d be a chance.

“I focussed a lot on my scrummaging – that’s what gets you picked as a tight-head, so once I got that up and running I could see that was a chance there, I just had to prove myself scrummaging against these guys.”

Holmes is responsible for one of the great moments in prop forward history for the Wallabies, one almost as outlandish as Bradbury’s come from nowhere Olympic skating gold medal. Against Ireland in 2006 he burst clear to run 50 metres to score a try Phil Kearns joyfully described as the ‘greatest try ever.’

Just as unlikely as him repeating the feat on Saturday, is the chance that he will play another Test after this one, although Rennie wouldn’t him out of the northern hemisphere spring tour.

Holmes, though, seemed to suggest that if selected he might have to decline.

“Yeah, look, I’d love to [tour] but I’ve already dragged my heavily pregnant wife from Perth to Queensland and she’s due the next couple of weeks,” Holmes said. “I don’t think I can push my luck any further.”