'Is it entertaining? No': All Blacks legend speaks out against Springboks' DNA

Sir John Kirwan has made his position on the Springboks’ style of play very clear saying, “I don’t believe that’s in the best interest of the game and not within what I would call the values of the game.” But not everyone agrees with the All Black legend.

So much has been written about the persistence of the Springboks to stick with their kick heavy game plan and so much criticism spoken about it, that you’d almost think we were in the middle of the Bodyline Ashes series of 1932.

The former All Blacks winger joined the debate this week and shared how he was not only disappointed in the style but also concerned that the South African team and management viewed the approach as a good one.

“I think the scary thing for me was after the game the coach and the captain thought they’d had a good game,” said Kirwan speaking this week with Newstalk ZB.

Whilst many share Kirwan’s frustrations, there are plenty who feel that the Springboks’ game plan makes perfect sense given the talent available to coach Jacques Nienaber.

South Africa flyhalf Handré Pollard was asked about the approach and his answer made it clear that fans shouldn’t expect any change for the Test this weekend against the All Blacks.

“The aerial contest is an aspect of the game where we feel we are the best in the world, and we work hard at it, and will keep doing it because we trust Jacques’ plan and the process,” explained Pollard.

Sbu Nkosi showing predatory instincts to capitalize on an opportunity to get the Springboks off the mark in Townsville.????⚡#RugbyChampionship #NZLvRSA #StrongerTogether #StrongerForever pic.twitter.com/e22YKTZrzf

The DNA phrase must be at the top of the South African media talking points advice sheet – it’s been rolled out in practically every interview for the past two weeks and Pollard had learned his lines clearly.

“We have a specific soul and DNA in this team, in which we believe we are the best at, and we trust our systems and our plan,” Pollard explained this week.

Whilst the messaging might be getting a bit tired, there seems to be a strong alignment and trust between players and coach within the South African camp and that’s crucial at times like these when results and the press are going against you.

Beyond the kicking game, it’s clear that the Springboks will be looking to their forwards to create a strong platform against the All Blacks. In last week’s 100th Test between the two sides, the Springboks dominated the Kiwi’s line out at times, stealing four of their throws and denying their rolling maul several times with a well organised defence.

Bench prop Steven Kitshoff confirmed the importance of this aspect of the game when speaking this week. “As a pack of forwards, we are focusing on the execution of our lineouts and mauls and our other strengths which we would like to nail down this week,” shared Kitshoff who with the likes of Malcolm Marx are often required to deliver crucial points and control off the bench.

Some disagree completely with Kirwan about the appropriateness of the Springboks’ game plan. Kiwi journalist Ben Smith, writing on RugbyPass, shared that “last time I looked, a team should always play to its strengths. If that means 10-man rugby or, in the case of the Boks right now, nine-man rugby, then so be it.” 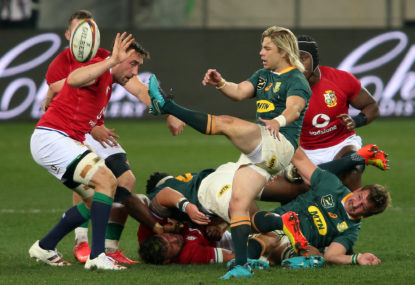 Faf de Klerk is an expert exponent of the box kick. (Photo by MB Media/Getty Images)

The World Cup winner also believes that Ian Foster should use this opportunity as a chance to give some game time to a few less experienced players. For him, the Championship is won and the trophy assured so why not have half an eye on the future.

“The biggest and most courageous thing to do is to throw some of those young guys out there, here we go boys,” said Kirwan when asked about the All Black’s selection ahead of Saturday’s test.

It would seem that the only way the Boks can start to quieten the questions about “kick gate” is to defeat the All Blacks this weekend. Many still won’t be happy with the tactic, but at least Nienaber can let the scoreboard do the talking.