That wait for Jez Lofthouse is now over with Brisbane Roar announcing his signature this week on a two-year deal.

Since joining Olympic back in 2018, the 21-year-old has chalked up 114 appearances, 44 goals and 34 assists- featuring in the NPL team of the season for three years running.

With his pace, balance and close control, Lofthouse has won plenty of plaudits, and Olympic FC head coach Ben Cahn told me he has no doubts his outgoing forward has the tools to make the transition into the professional ranks.

“It has been a tough year for Jez to get his body right,” Cahn explains “He suffered a stress fracture to his back at the end of last season, which carried into pre-season.

“A lot of credit must go to our physio, Andrew Shaw, who’s worked extremely hard with Jez and done a great job, and much to my dismay, had him sidelined for large parts of this season!

“He’s recovered to a good level and started to hit form in the past few weeks. Unfortunately, we won’t be able to reap the rewards from that, but it’s going to be hugely exciting to see what he can do in the A-League.” 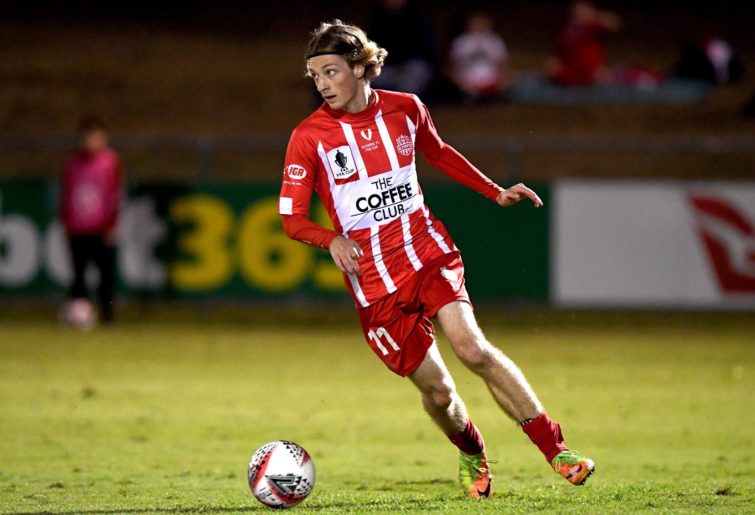 With his long blonde locks, Lofthouse – a Sunshine Coast native – looks like he could have stepped off the beach at Noosa Heads, but Cahn warned: “Don’t let that surfer boy exterior fool you, there’s a real drive and determination with Jez, he’s his own biggest critic and very honest with where he’s at in terms of his progression.

“Jez is an elite-level athlete, there won’t be many players in the A-League who can compete with him physically. People would have seen that when we played Adelaide United in the FFA Cup a couple of seasons ago (Olympic were narrowly edged out 3-2) he caused them a lot of problems.

“Of course, there may be time needed for adjustment, but I’ve no doubts given that time he will adapt and excel.”

Cahn also paid tribute to Lofthouse’s family as being a great source of support for the youngster.

“He has a terrific family behind him. They’ve guided him when he’s needed it and not put any pressure on him. The result of that is an outstanding young man and footballer.”

Lofthouse will be joined by attacker Henry Hore, the 22-year-old reuniting with Roar boss Warren Moon. The pair enjoyed success together previously in the NPL with Lions FC.

For Olympic FC, they must go into their final four games minus their key man. Cahn’s side have finished runners up in the NPL the previous three seasons, but currently lie sixth on the ladder and in danger of missing out on a top-four spot.

“It’s been an incredibly difficult year both on and off the pitch,” Cahn admits. “We’ve tragically lost three highly-valued people within the club in the last 12 months, which has taken its toll.

“It’s certainly showed us there are things far more important than football, but I’m extremely proud that we’re still in there and fighting.”

Despite only suffering three defeats all year, a number of draws have hamstrung Olympic, leaving them four points off another finals berth.

“A lot of sides have sat deep against us, and we’ve struggled to break down teams who are putting ten men across their own box. We haven’t really got the profile of player to change our approach,” Cahn states.

“I won’t go as far as calling it a transitional year, but we’re probably a few players short.

“We’ve got four games left and we have to win them all to stand any chance. We’ll give it everything we’ve got.”

Meanwhile, Lofthouse can look forward to making his highly anticipated A-League debut, with the Roar due to kick off against defending champions Melbourne City on November 19th.