Sean McMahon will play his first Wallabies Test since 2017 when he takes a spot on the bench for The Rugby Championship clash with Argentina on Saturday.

McMahon, who was brought back by Dave Rennie under relaxation of the Giteau Law this season, missed out on selection last week but will be given his chance in the return match on the Gold Coast as Pete Samu moves off the bench into the starting lineup.

Rob Leota, who made his debut last weekend, is left out of the squad altogether with Samu joining Rob Valetini and Michael Hooper in the back row. 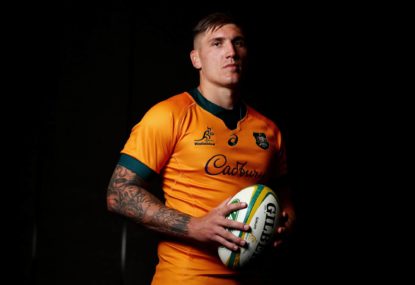 Rennie has also rewarded 38-year-old prop Greg Holmes with a call to the bench as reward for his efforts on the training paddock.

If he gets on the field, five years after his 27th appearance, Holmes will surpass Radike Samo as the oldest player to represent the Wallabies in the professional era.

Holmes at 38 and 113 days would also become the oldest Wallabies player since the second World War, one day older than Tony Miller, according to the Sydney Morning Herald. Wikipedia puts Miller and Holmes at exactly the same age.

“If I can come in and add anything, any of my experience and help out at all, that’s what I’m looking to do,” Holmes said when he was called up by Rennie.

Rennie said: “Pete’s been outstanding for us coming on as a replacement in the past few Tests and has earned his opportunity to show what he’s capable of from the kick off this weekend.”

“Both Greg and Sean have worked extremely hard on the field and around their detail off the field and they’re both super excited to represent their country again on Saturday evening.

“We’ve felt really well supported during all of our Tests in Australia this year and we’re looking to finishing the Rugby Championship with a performance the team and the country can be proud of.”

Tate McDermott will be rested from action as Rennie takes another look at Jake Gordon as he considers his options for the northern hemisphere tour.

Gordon, who battled back from injury to start against France earlier this season, lost his place to McDermott for the third French Test with McDermott keeping the place through the Bledisloe Cup. Nic White’s form and the promise of Ryan Lonergan gives Rennie some headaches looking ahead to the spring tour.

Despite three disappointing results against the All Blacks, Rennie has enjoyed an otherwise successful campaign, and appears to be winning over fans with his no-nonsense language and approach in the selection room.

He’s on the verge of overseeing an unprecedented fourth successive Rugby Championship victory after just one win from six last season.

White said the team has been determined to produce for Rennie this season.

“Dave and Wisey (assistant coach Scott Wisemantel) are world-class and last year as a playing group we almost felt like we let them down,” White said this week.

“Their detail within the game is quite high and they drive really high standards.

“It’s almost a game of catch-up for us as a group to play at the level they want us to play at – the benchmark they have is quite high but we’re getting there.

“Certainly in the last month we’re showing we’re a lot more patient with the game plan and trying to build a game.”

One of Rennie’s biggest calls this season was to restore Quade Cooper, first as a mentor and then, after the All Blacks shutout, to the starting team against the Springboks.

White and Cooper have been the starting halves in the past two Tests.

“I haven’t played a huge amount with him but just from the last few games, the control he has over the game is probably the biggest thing,” White said.

“He’s really calm at 10 and he knows how to pull the right strings and manipulate the game plan to really suit the way we want to play the game.

“He has a really calm voice and just seems to have a lot of time so my job is easy – just get there and flip the ball to him.”