I have been intending to write this article for some years but other things – actual, important things – have always got in the way. This week, upon the retirement of the great Sia Soliola, the timing seems right.

I am a lifelong Sydney Roosters fan, as are two of my good friends – in this article, I’ll refer to them as Andrew and Steve, mainly because those are their names.

In 2005, we decided that we wanted to sponsor a Roosters player. I’m not sure why we wanted to do this – maybe because we wanted to be more involved? Maybe it was delusion? Who can say? We couldn’t afford to sponsor a high-profile player, so we set our sights on our favourite young player at the time – Iosia Soliola (as he then was).

We had watched Soliola come through the grades excitedly. He played in the 2004 reserve grade grand final as a 17-year-old and smashed everyone in sight. We were sure he would be a superstar.

I should add that I, in particular, also thought that each of Michael Korkiddes, Ben Wellington, Kai Holland, Trent Clayton and Anton LaVin, among others, would be superstars, but that’s another (ongoing) story.

So, we approached the club and expressed our interest. Of course they were keen – here are sponsors for a guy who has yet to play first grade. We were on board, now they just needed to know the name of our company, for the purposes of the sponsorship.

Each of us owned separate businesses. We were all contributing and it didn’t seem fair to put just one company as the sponsor. After all, this company would be listed in official club correspondence, on the Roosters website and, best of all, would appear on the scoreboard when Sia Soliola inevitably scored heaps of tries. 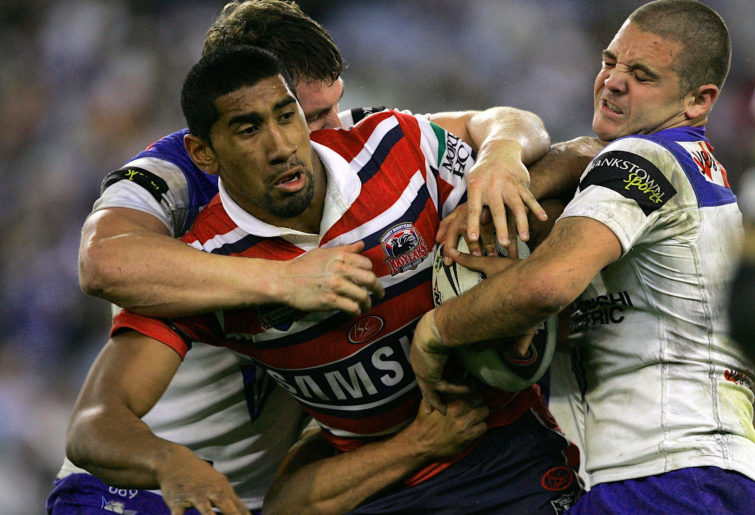 It would be unwieldy to have all three companies listed.

So, we said to the Roosters: “Do we need a company? Can’t we just be three guys who love the club?”

Apparently, we could not. They needed a company, because, I think, the sheet of paper the sponsorship guy had said “enter company name here”.

We talked about the options and then wondered: “Do they check up on the companies? Do they do due diligence, or do they just write in whatever name you give them?”

We decided to test the theory.

Accordingly, we went back to the Roosters and said: “Well, in fact, we do have a company. It’s called The Rheinberger Institute, but we usually just shorten it to ‘TRI’.”

At this point, the lark should have been up – John Rheinberger, as any true Roosters fan knows, played only two first grade games, the last of which was in the glorious 1975 grand final victory.

He was a replacement for Mark Harris, who broke his leg the week before. Rheinberger tasted premiership victory, with giants like Arthur Beetson, Ron Coote and Johnny Mayes, injured his shoulder during the 1976 pre-season and never played first grade again. He did, however, according to Wikipedia, “have a long and influential career in indoor cricket”.

Did our contact at the Roosters make this connection? No.

“What does your company do?” was the reply.

It did nothing, so we quickly replied: “It’s a think tank.”

And so it was official – TRI, The Rheinberger Institute, a leading think thank, was the official sponsor of young Sia Soliola.

“Do you have a slogan?” asked the Roosters.

Sure, we did! It was ‘The Pressure Specialists’. Were we still a think tank or were we now an industrial hose enterprise? Who knows?

“Do you have a logo?” asked the Roosters.

Sure, my mate the graphic designer pulled one together using a silhouette from Queer Eye, which was popular at the time. We were having so much fun it was ridiculous.

After attending the pre-season sponsors BBQ and getting an official sponsor’s polo shirt, we were excited to see Sia made his debut in Round 1 that year against Souths. He played 19 games that year, scoring six tries.

Each time he ran onto the field at home, TRI was credited as his sponsor on the big screen, as we were when he scored his two home tries, all to delirious celebrations. No one has ever enjoyed a bad season more than we did that year, the Roosters’ first without Freddy Fittler.

We loved Sia when he played for the Roosters and we’ve loved him ever since – he’s been a great player and a great man. We’re excited that our fake think tank was a small part of his rugby league journey. He has no idea who we are, but we wish him the best in the next chapter of his life.

The Sydney Roosters have confirmed the signing of star Melbourne Storm hooker Brandon Smith on a three-year deal from 2023.

Melbourne have called Brandon Smith’s bluff by not sacking him a year out from the end of his contract. That would have been playing into the hands of the Kiwi forward and his agent.