India opener Smriti Mandhana has scored a flawless century as Australia continue to struggle to take wickets in the only Test of the CommBank Series on the Gold Coast.

After a rain-affected first day where the Australian bowlers struggled to hit a good length consistently, captain Meg Lanning would have been hoping that her side could bounce back on day two and vindicate her decision to put the Indians in to bat.

With Mandhana on 80 not out overnight, the stylish left-hander had other ideas. After receiving an early reprieve after being caught by Beth Mooney off an Ellyse Perry no-ball, she struck the perfect balance between punishing the bad balls and respecting the good ones.

Her century sees her become the first Indian woman to score a Test century on Australian soil.

This is Mandhana’s fourth Test; after a good ODI series where her best score was 86, she has adapted to the longer form of the game very quickly.

The 25-year old commented at the end of day one that she felt the Australian bowlers hadn’t adapted to the slower, wetter Gold Coast wicket. “In the first 10 overs I think they bowled quite short, especially considering the wicket – the Mackay wicket, where we played the one-dayers, and the wicket today, were completely different,” she said.

Mandhana didn’t miss an opportunity to score from the inconsistent bowling, scoring all around the wicket and pacing her innings perfectly. At times she would be comfortable not scoring for a number of overs and then unleash a powerful attack when the bowling allowed. Australia debutante Darcie Brown was on the end of one of these attacks as Mandhana scored four fours off a single over.

If you've missed any of Mandhana's innings you can check all the highlights out here #AUSvIND #PinkBallTest https://t.co/7lk4fXLqmJ

Speaking at the end of Day 1, Lanning complimented the Indian opener for how she had paced her innings. “Her tempo was excellent in this innings. She was punishing the bad balls and defending the good ones, which is pretty simple but when you can actually execute that it’s certainly very effective.”

Australia thought they had managed to pick up the crucial wicket early on day two when Mooney pulled off a stunning one-handed catch just above the grass, but replays showed that Perry had just overstepped in her delivery stride.

Mandhana’s century came off 170 balls as India target a big first innings score to put the pressure on the host team in a crucial match. She was eventually dismissed for 127, having put the visitors in a commanding position.

Australia currently lead the CommBank Series 4-2 after the three ODIs, but both sides are still in the running for a series victory with three T20 matches due after this Test match.

Rachael Haynes has been opening strongly for Australia and was expected to do so Thursday 30th September for day 1 of the Test against India. 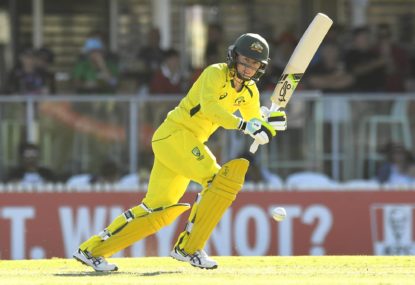