The Roar
2nd October, 2021
6
Join the conversation
Advertisement
Write for The Roar

Celtic legend Chris Sutton has given the club’s under-fire Australian coach Ange Postecoglou a ringing endorsement after a tough start to his career in Scotland.

With just two wins from his last eight games, Postecoglou’s team is sixth in the Scottish Premiership – six points behind leaders and main rivals Rangers.

They failed to qualify for the Champions League and were smashed 4-0 Bayer Leverkusen in the Europa League midweek.

“Is he getting everything right? No,” wrote Sutton in a column in the Daily Record.

“Do I agree with his approach in some situations? No.

But do I think some people are losing the plot over the Celtic manager? Yes I do.”

Sutton said Postecoglou had been “dumped into the middle of a shambles.”

“I find the whole thing staggering. What’s the alternative? Sack him? Lose faith in a guy within 12 weeks after a massive overhaul? Really?” Sutton wrote.

“Postecoglou is just starting one of the biggest overhauls the club has had for many a long year and folk seem to think change should be instant.

“Listen, I’m not some cheerleader. There are aspects of his approach I don’t think are suitable for the way his squad is built right now.

“I don’t believe Celtic should be going toe to toe with Bayer Leverkusen at this stage of their development. A bit more pragmatism wouldn’t go amiss in certain situations.”

He said two wins in eight games “isn’t a brilliant statistic but I’m not sure exactly where people thought Celtic would be at this stage of this rebuild.”

Sutton said he thought the Aussie could turn the club around.

“I’ve a hunch they might just get there with this manager once it all settles down and his patterns are fully established with guys who can do it.

“Postecoglou has proven form with this. He has gone into clubs and rebuilt them. It took time but he got there in both Australia and Japan. Yokohama were struggling when he joined and he turned them into the J-League champions. That doesn’t just mean he’ll do the same at Celtic. But you can see the template.”
Sutton understands as well as most the passions at the club, having played 130 games for the club.

“Celtic sparks strong opinions,” he wrote. “That’s the nature of the club.”

“Is he asking players to do things that are beyond them? It looks like it at the moment.

“But he’ll keep saying that’s the process and if I keep doing it the players will eventually get better at it.

I’d say he’ll need more arrivals, better quality to do so. But Celtic have bought into this ideal and they can’t just abandon it now.

“You can’t just flick a switch. Celtic are in major transition. We all knew it before the season started but somehow it’s been forgotten and things are expected to be fine and dandy right now.

“If Postecoglou is going in next season’s Europa League and taking hidings in the same way his team have done in the first two games of the group to Betis and Bayer, critics will have every right to batter him with a baseball bat.

“But surely not now. Not at this stage.”

Australia’s Ange Postecoglou has taken Scottish giants Celtic to a cup final just months into his reign at the Glasgow club.

Ange hits out at 'condescending' questions as Celtic slide

Ange Postecoglou has accused the Scottish media of being “condescending” towards him but insisted he fully understood the magnitude of managing Celtic. 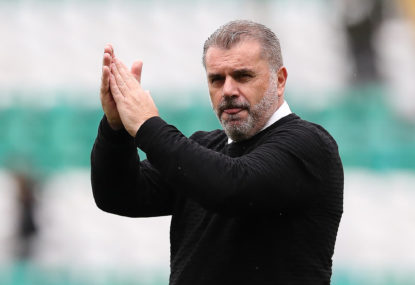 Ange hits out at 'condescending' questions as Celtic slide