Belief, brutal strength, bloody-mindedness: The Boks are bloody back, baby!

Two Tests between number one and two on neutral ground. A kick at the death both times.

And South Africa is still, even after a gloomy tour in Queensland, and most of the rugby aristocracy baying for the All Blacks to drink Bok blood for the ‘good of the game,’ … the world number one team.

By the skin of Frans Steyn’s super-stretched size 50-22 shorts.

Frans got pinged for not rolling away from a ball he stole from Damian McKenzie in a tackle.

And yet, even though Jordie Barrett flushed another late match kick, it was Elton Jantjies who had the last laugh.

How did they do it?

Belief, brutal strength, bloody-mindedness, ball skills, boots, breakdown bastardry, and brawn. But not because of Willie le Roux, who surely was retired by Ardie Savea’s men? 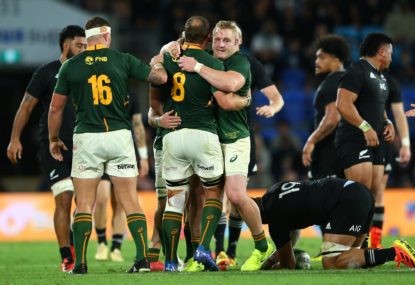 His 50-22 attempt was not initiated by a phase in the Bok half. Frans could probably do one from his own tryline.

Yet like many Bok triumphs, it was built on the firm foundation of Eben Ectomorph Etzebeth, Malcolm Mongrel Marx, Duane Ver-Maul-en, the Spicy Plum, and Blood de Jager. But it also featured the tricky hands of insouciant Lukhanyo Am and Frans’ territory-eating right foot.

The Boks kicked from hand one less time than the All Blacks, but far more of their kicks were contested or awkwardly placed.

By my count, almost half of the Bok kicks were regained by hook and by crook. And yes, they persisted with kicking inside the All Black 22, waiting for someone besides a Barrett to catch it cleanly.

On the New Zealand side, tall Jordie continued his unreal form, whilst Beauden was good until an unspeakably unwise cross kick into touch in his own 22 with the game in the balance.

The lineout seems to miss Sam Whitelock’s IQ, with Etzebeth a pest. The scrum held up, for the most part, but an early Bok Bomb Squad gained the nudge. Only a valiant effort by Ardie Savea and Co rescued a couple of backpedalling scrums.

The midfield battle seemed to tilt the Boks’ way. David Havili is better in other places at this level.

The All Black loose forward riddle is still unsolved, but might have a blackadder solution. Akira Ioane was not a good fit for this sort of street fight.

But mostly this was a ding-dong ping-pong battle with a clearly exhausted referee.

The Boks ran more metres with the ball than the All Blacks, and lost fewer rucks.

I still think the All Blacks have had the best 2021, and can claim “true best” at the moment because of the Bok-Wallaby losses, but if they wobble on the EOYT and South Africa (with RG Snyman and Cheslin Kolbe returning) win out, the Lions series winners may be seen as still the top dog.

But on this night, it was a classic slugfest with big hearts on full display: Kwagga Smith and Elton have copped stick from me for ages, but they looked like proper Test animals.

Is this a better mix of kick-chase-run-pass? Yes. And Pollard’s missed kicks at goal are still undermining the effort.

There are still issues.

But backing up a World Cup win with an undercooked Lions series triumph and then surviving a bubbled bad tour to take an All Black scalp says to all: don’t bury these Boks yet.

There is a pathway to greatness if this group (Malherbe, Pollard, Etzebeth, de Allende, de Jager were all in that 2015 semifinal loss) can win these types of Tests in 2022 and 2023, with the help of young players coming up. The mix is the key.

For one night, Jacques Nienaber got most of it right:

1/ the early front row revamp
2/ the calibration of D ‘n A
3/ the goal kicker switch
4/ the shape in the red zone
5/ the bloody score!

But he must pull the plug on Willie. Sad but true.

Time to celebrate this rare win! Frans Steyn is now 5-5-1 versus the old foe. He looked ecstatic.

(He stole that ball, ref. What’s he supposed to do? Give it back in the air?)

The All Blacks will be all the better for these two blockbuster battles. Harder. More clear. And personnel decisions will be made.