Last year’s international season had a huge, South African-sized asterisk attached to it. This year, despite another bunch of Covid generated asterisks, the four SANZAAR nations, against overwhelming odds, somehow managed to cobble together a meaningful tournament, with a great conclusion.

More, from me, on New Zealand’s ‘Grand Slam’ stumble, South Africa’s tortuous but ultimately successful search for their DNA, Australia’s impressive climb from the depths of despair and Argentina’s ill-fated border hopping jaunt on Monday. But for now, let’s see who makes The Roar’s team of the Rugby Championships.

Some qualifiers first. This is the team of the tournament, based on performances across all six rounds. That’s why you won’t find Cheslin Kolbe and Pieter-Steph du Toit, who otherwise might have been considered walk-up starts, had they not been absent through injury.

Evaluation across all six rounds also cruelled the chances of players like Akira Ioane, raging hot favourite for the number six jersey after rag-dolling the Wallabies, but abruptly pulled back to the pack by the Springboks.

On the other hand, there were players, like Aaron Smith, who only played one match, but whose level of performance was so demonstrably superior, they still demanded strong consideration.

With zero wins, a dodgy scrum, and little seen of their talented backline, it proved impossible to find a spot for any Puma. They did however gain one seat on the bench; not a charity selection, but just reward for their combative skipper.

Similarly, the Springboks’ backline was dealt out of contention by their own game-plan. We got a glimpse of what Lukhanyo Am can do in the final Test, but how much better would it have been to see more than glimpses?

So, to the team, and a tough start at loosehead prop. None of New Zealand’s roster demand selection, which leaves the excellent James Slipper with his nose ahead of Steven Kitshoff and Trevor Nyakane.

There were plenty of spritely hookers on display, including impressive newcomer Samisoni Taukei’aho. But Codie Taylor’s sizzling burst proved to be the winning of the centenary Test, in Townsville.

The bench spot goes to Pumas skipper Julian Montoya who, aside from being shafted at the captains’ photo shoot, enjoyed a strong tournament, finally having stepped out of the shadow of Agustin Creevy.

Tighthead prop proved to be the most hotly contested position. Nepo Laulala was New Zealand’s most consistent prop, Frans Malherbe was bettered by nobody at scrum time, and Taniela Tupou stepped up big-time against the Boks.

I’d be happy with any of them, but it’s Malherbe, with the Tongan Thor to play long minutes off the bench.

Lood de Jager was the tournament’s lineout colossus. Tomas Lavanini was consistently good, and reined in his discipline issues to such an extent he only received two yellow cards! For their part, the Wallabies got plenty out of all of their middle rowers.

But you all know where this is headed; the two masters take the chocolates at lock, Eben Etzebeth and Brodie Retallick.

Flanker is another tough selection. Ioane we’ve already mentioned. Lachie Swinton was Dave Rennie’s preferred option for most of the tournament, but the southern hemisphere’s best blind-side breakaway? Hardly. Pablo Matera defended stoutly but wasn’t at his best with the ball, before a Byron Bay massage table led him astray.

South African captain Siya Kolisi was less prominent than he needed to be in the losses to Australia, but his performance in Townsville was outstanding. He’s our man at blindside.

By contrast, it’s an easy choice at openside. Michael Hooper put all of his critics in the shade with superb, consistent performance throughout. He wins the 7 jersey in a canter.

There’s a case to be made for Ardie Savea, although perhaps not at number 8. Captain of the winning side counts for plenty, and while there are many who don’t see this as his natural position, he almost always finds a way to have an influence on every match he plays. 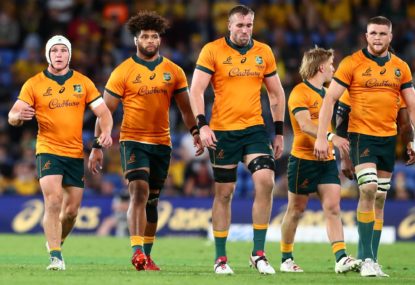 I’m not certain number 8 is Rob Valetini’s natural position either, but for sheer consistency, nailing down the role in a steadily improving Wallabies’ pack, working hard in defence, and always offering himself as a hard-running option on attack, the jersey is his.

Halfback offers up a strange scenario. Gonzalo Bertranou was ok without being great, and the Wallabies took a long time to decide on Nic White over Tate McDermott and Jake Gordon. Faf de Klerk might have been a contender, but with a point deducted for every up and under, he finished with a differential of negative thirty-seven.

The All Blacks offered up four half backs, and while Aaron Smith, at home on baby duties and lighting things up for the Manawatu Turbos, only played one match, he was so far ahead of the others, he still did enough to take the decision.

At 10, Beauden Barrett had his magic moments, although his horrid 59th minute kick pass in his own 22, to a man under pressure, automatically disqualifies him. There’s really only one choice; although late to the party, Quade Cooper’s return to the Wallabies, to beat South Africa with the final kick of the match, can’t be bettered as the individual highlight of the tournament.

There’s also only one choice at inside centre, with Samu Kerevi making every post a winner after his return. That’s not to disrespect David Havili, who has made huge strides for the All Blacks, albeit afforded less room to operate in by the Boks.

Not everyone believes Rieko Ioane is a natural centre, but injury free and back to operating at full pace, he’s been the best on display across all matches. Honourable mention to the improving Len Ikitau.

The two wingers pick themselves for different reasons. Marika Koroibete’s work-rate is an inspiration, and his return to the try scoring sheet was everything he deserved.

A million to one to make this side at the start of the year, with seven touchdowns, Andrew Kellaway topped the try-scoring table by a lap. A classic story of a footballer seizing an opportunity with both hands.

The starting side is completed by Jordie Barrett, who kicked on from his Perth red card, to be the All Blacks’ best against South Africa.

To complete the bench, there are two forward positions up for grabs. De Jager takes one, which leaves a toss-up for the loose forward utility between Aussie Pete Samu and Ethan Blackadder. Blackadder’s best – against South Africa in Townsville – gives him the nod.

Cooper being a one position player makes the selection of the back reserves tricky. But let’s forgive Barrett his moment of madness, and reward Havili for his consistency and versatility, with Ioane to cover wing.

So, here’s the team in full. Yes, there are more Wallabies than All Blacks. But I’d suggest that the two comprehensive wins by the All Blacks speak more to the depth of their roster and less reliance on a core group of outstanding players. Which also suggests that if the Wallabies are able to continue to improve their 10-25 ranked players, they’re going to be increasingly hard to beat.

Let’s hear what you think. Who’s lucky to be there and who is missing?