The Bears looked incompetent at times, uncompetitive at others but worst of all, unprepared and that is on head coach Matt Nagy.

Nagy was hired as coach of the Bears for the 2018 NFL season, replacing John Fox. His coaching career got off to a fantastic start with the Bears going 12-4 in the regular season behind their dominant defence and a second-year quarterback named Mitchell Trubisky. This fantastic regular season led to Nagy receiving the NFL coach of the year award and things were looking fantastic in Chicago.

Unfortunately, the Bears lost in the 2018 wildcard game to reigning Super Bowl champions Philadelphia at home thanks to a missed field goal to end regulation by Cody Parkey and that was the beginning of the end.

The Nagy led Bears would go on to 8-8 records in both 2019 and 2020, making the playoffs in 2020 but getting beaten by the old and wounded Saints. The defence was the strength of this team, but Nagy was hired for his offensive expertise and changes had to be made, starting at quarterback.

Mitchell Trubisky was not given his fifth-year option to stay in Chicago and would end up signing with Buffalo to backup Josh Allen, so the Bears were on the hunt for their future quarterback. They were rumoured to be connected to players like Russell Wilson and DeShaun Watson all off-season but finished with Andy Dalton. Yes, Andy Dalton. They were looking at Bondi mansions but settled for a one-bedroom Footscray apartment.

They weren’t done yet though, holding their first-round pick in a draft class rich with talent and they selected Ohio State prospect Justin Fields and Bears fans rejoiced, knowing Chicago finally had a franchise QB. 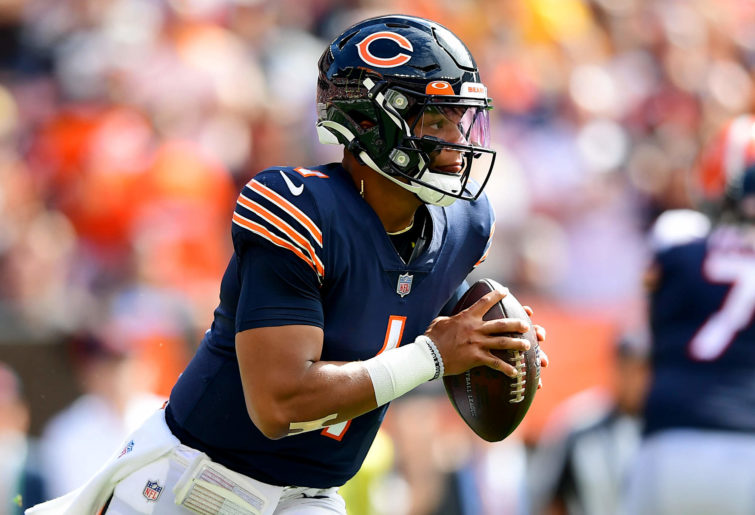 However, instead of spending the off-season devising a game plan based around Fields’ unique strengths, Nagy simply ignores him, developing a fundamentally boring offence based on Andy Dalton’s strengths, short passes.

Now yes, if Fields wasn’t ready, then starting Dalton is the right call. But at least put some time into making sure he is ready. Because it was inevitable that Fields was going to start at some point in 2021 and it was quite obvious that the game plan was poorly executed, which is the basis of the argument.

In this start against Cleveland mentioned earlier in the piece, the Chicago Bears had one net passing yard. One. Fields finished the game with 68 passing yards but was sacked nine times for a total of 67 yards lost. Incredible numbers and an indication of complete incompetence by Matt Nagy in developing young talent and scheming to individual strengths.

Dan Orlovsky said on ESPN’s Get Up that it was “the worst offensive game plan he has ever seen in his life” and had the stats to back it up which are the following:

Fields was pressured on 60 per cent of dropbacks, which is the highest in an NFL debut since the statistic has been kept.

On 20 of 31 dropbacks, the Bears had the minimum five offensive linemen pass protecting.

There were only two designed quarterback runs called for the whole game.

Orlovsky also went on to say that his game plan was “either negligent or intentional” saying it was “embarrassing” and that after “149 days of preparation, his job is to have Fields ready” and I couldn’t agree more with his sentiment.

NFL fans know what Justin Fields is good at and Matt Nagy did the exact opposite. For a man who was hired to be an offensive guru coming from the Andy Reid Kansas City coaching factory, he has fallen on his face as an offensive play-caller.

I truly believe the disaster in Cleveland was worthy of Nagy being fired, but if the Bears can’t beat divisional rival Detroit Lions at home, expect a new head coach in Chicago for Week 5, because it’s simply not good enough and this proud franchise and fanbase deserve a lot better.

I have an admission to make: I’m a diehard Bears fan and I’m not proud of it. Ever since Jay Cutler was ripping cigs…