Double-headers are double the fun

I got down from Brisbane to Cbus Super Stadium with my brother on Saturday to watch the Rugby Championship double-header, the two-for-one tickets making a Bosley boys weekend at the Gold Coast an easy decision.

It was my first time there, and heading into the stadium we were joined by a multinational crowd dressed in green and gold, gold and green or black, and there were even a few with blue and white stripes.

Cbus is a lot smaller than Suncorp Stadium in Brisbane, and our seats were in the third row on the corner, just past one of the try lines. It gave us a cracking view of the action at our end of the park and an interesting wide rear-on view of the other end.

The Wallabies and Pumas started proceedings, with the highlight up our end of the park being the first try of Andrew Kellaway’s hat-trick, which came off a blockbuster run by Rob Valentini and an unselfish pass to Kellaway to finish. I thought Valentini was set to shrug off the backs covering him and score himself, but his willingness to forgo personal glory for the result was commendable.

A lot of the rest of the Wallabies scoring action was at the other end of the park, with the view allowing an appreciation of how hard these Wallabies are now working off the ball in attack, providing dummy runners and ensuring that playmakers have multiple attacking options. Folau Fainga’a stood out as really involving himself in attack; it was pretty impressive to see his speed and urgency around the park for a hooker.

Things went a bit pear-shaped for the Wallabies in the last 20, and that is for them their coaches to look at. Suffice to say by the 72 minute, with the Wallabies having an unbeatable lead but with the ever meticulous Jaco Peyper checking the grounding on an Argentinean try in front of us and the Pumas captain standing next to him looking desperate to save some face, it may have been loudly suggested that Peyper to “just give it to them and get on with it”. 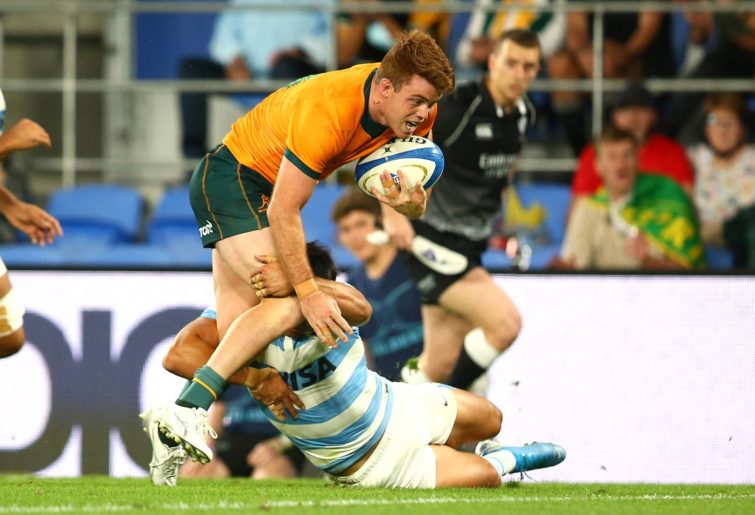 In our stand we labelled that the ‘Byron Bay try’ in honour of those Pumas players who got trapped among the beautiful people in the sexiest place on earth.

The All Blacks-Springboks game an hour later was a real treat that we are unlikely to see again in Australia unless we get hosting rights to the World Cup. I was unfortunately caught in a drinks line during the anthems, but my brother commented on the deafening roar of the fans from both teams singing along. Fortunately I got back in time for the haka. The intensity and excitement were palpable.

The players lived up to expectations, with my first live impression of how much these matches mean to people in these two countries being when Duane Vermeulen turned and ran 20 metres to attempt to tackle Sevu Reece. The lightning-quick winger just made it over for a try right in front of us. I will forever have the vision of 35-year-old, 117-kilogram 193-centimetre Vermeulen galloping towards us like a cape buffalo bull in its prime burnt into my brain!

Another highlight was being right in front of Beauden Barrett, Rieko Ioane and Ardie Savea thrust through the Boks defence like a rapier to score. The move was an All Blacks masterpiece in the instinctive rugby that they do best and all the rest aspire to be able to match.

I hesitate to call Springboks titan Eben Etzebeth walking around bleeding profusely after a nasty head clash up the other end of the park a highlight. However, while he was getting treated before leaving the park I was imagining the man who never smiles unless he has just won a World Cup arguing with the Springboks medical staff: “I’m alright to finish the game, Doc. It’s just an eye”.

The game ended in dramatic fashion, with the Springboks winning the last of dozens of mighty clashes at the breakdown to set up Elton Jantjies to kick the winning penalty goal into a stand of Rainbow Nation supporters, who were belting out a rapturous rendition of ‘ole, ole’. Then hands were shaken between opposing fans along with the predictable but still amusing comments from a few Kiwis that, “At least we didn’t lose to Australia”, and we all paraded out into the night.

I doubt that there was a single dissatisfied customer, so if it is commercially possible, let’s find a way to keep this Rugby Championship double-header thing going.