'Stupidest fixture ever': The 'cynical, money-making ploy' that exposes Wales to All Blacks' annihilation

The Roar
5th October, 2021
74
Join the conversation
17847 Reads
Advertisement
Write for The Roar

The All Blacks Test against Wales later this month has been described as “the stupiest fixture ever” with the hosts rocked by a scheduling issue and multiple injuries ahead of the visit of the Rugby Championship winners.

Wales will be without a virtual full team of players for their opening Spring international against New Zealand on October 31 (AEST), with Lions fullback Liam Williams the latest big name on the absentee list after having surgery to remove his appendix.

While Williams joins Justin Tipuric, George North, Leigh Halfpenny, Dan Lydiate, James Botham, Jarrod Evans and Josh Macleod on the injury list the Welsh are also without their England-based stars. Thye game is outside the official Test window which means Premiership clubs won’t be required to release their players for the fixture.

Wales haven’t beaten New Zealand in 68 years and the match has already sold out the 74,000 tickets.

But James Corrigan, writing in the UK Telegraph under the headline “Forget rugby – Wales’ date with the All Blacks is a stupid, cynical, money-making ploy” said the Welsh Rugby Union had arranged “the stupiest fixture ever.”

“Unlike the three Tests on the weekends thereafter, this, the undobuted glamour tie, is being contested outside of the international window,” he wrote.

“Wales will be under-strength and the only ones who will be fully loaded that day will be the libated portion of the 74,000-strong crowd. 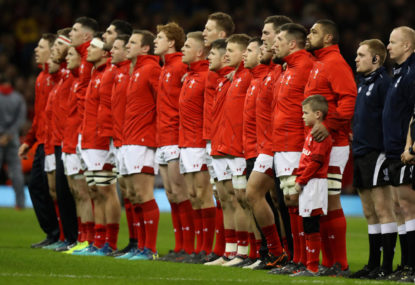 “Well, why not?” the WRU might have surmised. Wales have not beaten the All Blacks in 68 years, since Tenzing and Hilary were still scaling their way back down Everest, and despite being reigning Six Nations champions, there would hardly be unfettered optimism of the Pivac party finally conquering this particular mountain this time around.

“That gullible, romantic bunch of daffodil-clad daftees will not moan if the void lasts at least another year. What is another 12-month in a whole lifetime of failure, what is another digit in a curse?

“Except it is not a curse, because it has reached the stage where the WRU, laughably referred to as “the governing body”, is actively making it harder for its side to achieve a feat they find impossible anyway.

“The pandemic dictates that the WRU is more desperate for money than ever and before Covid-19 it would invariably jam in another autumn international. If you want to see how four goes into three, then simply peer down recent Welsh schedules. Warren Gatland went along with it, saying exposure to the top sides was vital and, well, as altruistic members of that ever-inclusive international rugby fraternity – quiet at the back – Wales should play nations such as Fiji shouldn’t they?

“The WRU would therefore ignore the window and divert the blame to those money-bagged English brutes who refused to allow our boys to take their rightful place on the hallowed turf, blah, blah. A PR masterstroke, but pathetically transparent and now outrageously self-detrimental.

“If and when Wales ever beat New Zealand again it will be a moment many of us have awaited since the seeds of our oval-ball obsession first sprouted. Wales have defeated South Africa, Australia and, on occasion, Fiji. The Kiwis are the scalp we crave. They should not be first up, in the unofficial slot.

“It demeans the occasion, which is a crying shame because it is difficult to quantify what it could mean to the country.”

England winger Chris Ashton, speaking on the BBC Radio 5 Live Rugby Union Weekly Podcast, was supstrised by the WRU decision to play world No.2 ranked New Zealand outside the window.

“Who’s organising to play the best team in the world when you can’t have all your players free?

“Someone’s had a shocker there.”

England legend Jeremy Guscott said the sold out crowd will be attending to watch the All Blacks in action.

“My frustration with the game is lessened when I watch the All Blacks play because it is such a breath of fresh air,” said Guscott in a column for The Rugby Paper.

“It can be a transient time for teams two years before the World Cup, and it has to be said that while Wales can beat New Zealand, it’s odds-on they won’t, even with a full house behind them.

“New Zealand may not be world champions, but they are consistently the best team in the world, and while Wales have a game in them like England did in the semi-final of the 2019 World Cup, there is no sign that will happen.

“It would be a miracle result if Wales won, and that’s why it’s fair to say that the full house in Cardiff will be going there to watch New Zealand because of their brilliance, every bit as much as supporting their own team.”