The South Africa vs All Blacks game showed the lack of [Australian] forward power for the big games. How should Rennie be training our smallish forwards in to be competitive over the English in November and the longer haul to 2023, assuming we cannot get Arnold or Skelton back next season.
– Stillmissit.

Why do you think New Zealand don’t seem to be getting big hard forwards into the All Blacks? The decline of rural rugby? Too much emphasis on skills? Competition from basketball?
– JD Kiwi

I thought Akira Ioane was quite poor at times. He excelled against the Wallabies but struggled against the Boks.
– Phil
We never saw the likes of young Ethan de Groot get a run, not even off the bench. That does tell one something. I also might mention, that we lost Lachlan Boshier to off-shore rugby, due to his non-selection.
– Muzzo

Before the match, the message out of camp New Zealand was all about getting it right this week and being more accurate. Nowhere suggesting they might have had their tactics wrong and needed to make some changes. Did Foster get his pants pulled down by Nienaber with regard to the two teams’ game-plans?
– Ozinsa

There was plenty of Kiwi discomfort evident at the lack of forward power, and question marks about the New Zealand selection (especially in the back row) from the second tussle with the world champions. The top comment was also typical of a consistent underestimate of the Wallabies’ achievement in beating the Springboks twice in two weeks.

We can explore these questions further by looking at the issue of power – not just via a forward comparison, but by comparing those players who tend to exercise their power up the middle of the field. That means more of an emphasis on the middle third of the team: the back-row and the inside backs, and particularly the number 12.

Let’s look at some of those players working in combination at one of the New Zealand rucks in the second period.

Up until Round 4, the All Blacks had the highest ruck retention rate (over 96 per cent) and were winning the quickest ball (2.86 seconds per ruck) of any side in the competition.

When you are winning the ball as quickly as that from the breakdown, it means \there will seldom be more than one or two players committed to the cleanout.

With their host of excellent on-ballers, the Springboks looked to disrupt the All Blacks’ quick-ball policy, and in the second half their efforts came to fruition: they won one in every five of the rucks set by the Kiwis, who ended the game 11 per cent below their typical ruck retention rate. That represents a massive drop-off.

In the above example, there is a combination cleanout over the top of Brodie Retallick by two players – one back-rower (number 8 Luke Jacobson) and one inside back (number 10 Beauden Barrett). At the initial ruck, they are splintered by a counter-effort led by number 12 Damian de Allende, and ably supported by captain Siya Kolisi. 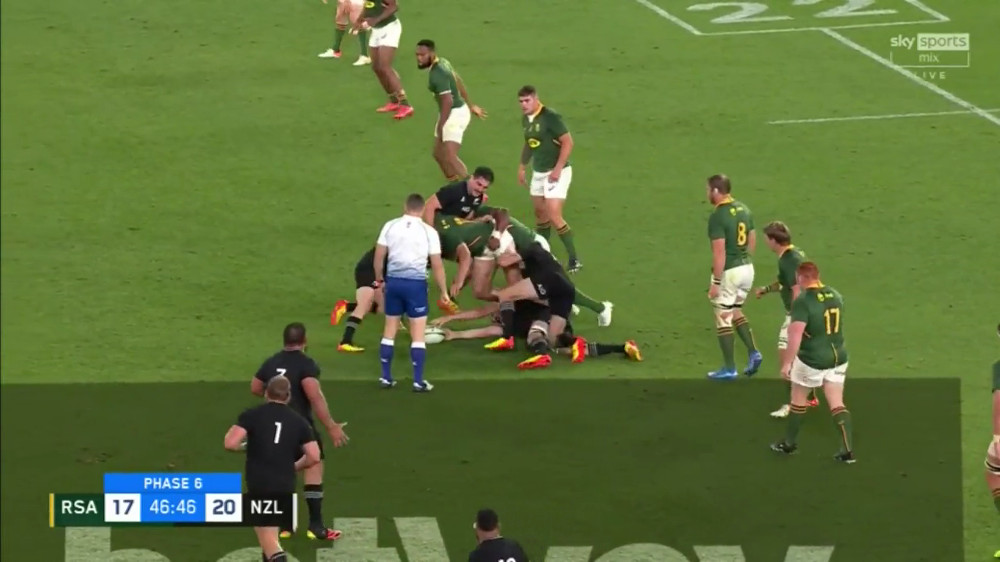 The arrival of a third player (prop Joe Moody) temporarily stabilises the situation, before Jacobson and Barrett are driven off the ball for a second, and decisive time by the combination of Kolisi and de Allende. 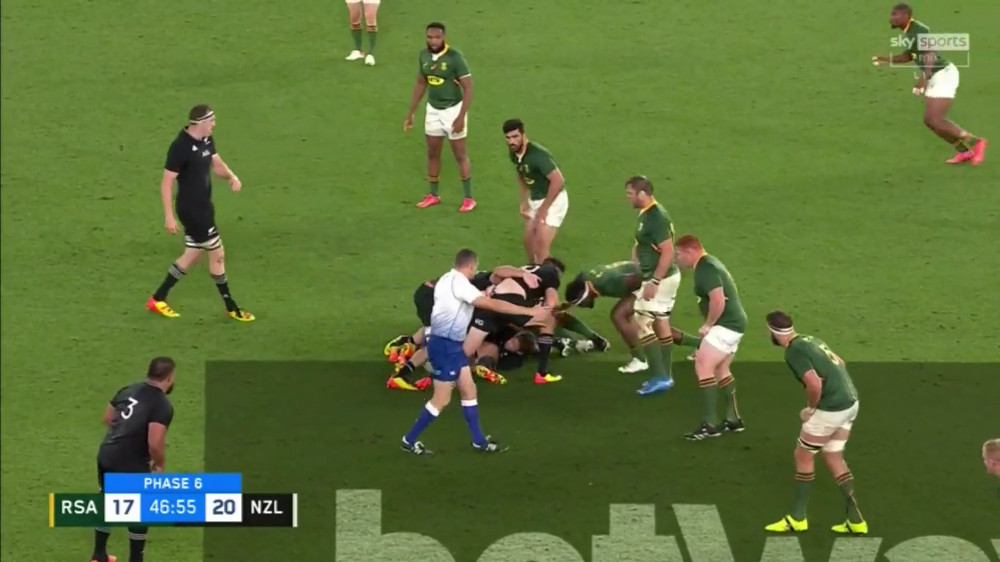 As you can see from the screenshot, the South African body positions are far lower and more dynamic than their Kiwi counterparts. The same was also true for most of the game on the carry.

These are both scenarios where the defence should be able to make an offensive tackle, forward on forward, and win the collision. In the first example, Springbok second row Lood de Jager still manages to penetrate the double tackle of Moody and Jacobson and set lightning-quick ball for the next phase.

In the second instance, Bongi Mbonambi has no great pretensions as a ball-carrier, but he is still able to brush off the attentions of one back-rower (Akira Ioane) and two inside backs (Barrett and Brad Weber) on his way to the goal-line.

Now let’s expand the question to include some obvious bewilderment about how the Wallabies managed to complete the double over the world champions.

Everyone keeps trying to downplay the Wallabies being the only ones with a winning record against the no.1 team in the world and the reigning world champions.
– PeterK.
Does the game plan and cattle we’ve brought in to implement it allow us to match up better with England? It’s been horribly obvious for the last five years, that from minutes 60-80, England would simply run away from us. Are we ready to change that?
– Ozinsa.

Look at the Wallabies from the perspective of ‘power through the middle of the field, in the middle third of the team’, rather than through the lens of a rigid division between forwards and backs. The Wallabies are more powerful than the All Blacks at number 12 (Samu Kerevi), and they are probably more direct and tighter across the back row.

One of the keys to the two Australian wins over the Boks was Kerevi’s ability to dominate the South African midfielders and back-row in combination.

In the first example, Samu beats the tackle of Kolisi and carries Kwagga Smith along for the ride for a few more metres. In the second, he splits De Allende and his centre partner Lukhanyo Am from a standing start. Both scenarios occur from first phase set-piece, against an organised defence.

Freed from Kerevi’s shadow, Damian de Allende came into his own against the All Blacks – on the carry.

In the first example, he receives the ball about seven metres behind the site of the previous ruck, but ends up five metres beyond it after carrying Akira Ioane downfield and shrugging off the rest of the Kiwi back-row. In the second, he splits the seam from a scrum between Barrett and David Havili without a paw being laid on him.

The big Munster centre stops Havili in his tracks before hurling him backwards, and this means that the attempts by the New Zealand back-row on following phases can never break the gain-line.

First Ioane, then Jacobson are stopped for no gain, and (predictably) Brodie Retallick is robbed at the breakdown by Siya Kolisi on fourth phase. The Springboks won the battle in the middle of the team and through the middle of the field against the All Blacks, just as the Wallabies had won the same battles in their games with South Africa.

Who do you think should come in for Kerevi? Paisami is the obvious answer but could O’Connor be in the mix. Cooper seems to have benefited from a big ball runner at 12. Paisami is small but powerful. Dave Rennie suggested Kellaway could be a centre option. Could Hodge do a job there?
– Hhhmmmm
O’Connor would be my first pick, though Paisami is a developing player who should, with good coaching, become a top class international. Remember O’Connor was a very effective centre at Sale.
– Mzilikazi
If Kerevi is just out for Japan then Paisami so the game-plan does not have to change much. Paisami should be able to overpower the Japanese centres and get over the gain-line. It has been forecast that Kerevi should only miss one European game at most.
– PeterK

This question is obviously related to the previous section. With Samu Kerevi out of the Japan match at least, we have to begin by admitting that there is no ideal replacement for the outstanding midfielder in this year’s Rugby Championship.

A couple of years ago, there would have been one, with Tevita Kuridrani still playing near the peak of his considerable powers – but Tevita’s ship has sailed, at least in international terms.

Nobody else has Samu Kerevi’s enviable mix of size, power, offloading and decision-making ability. The next stage is to ask who can replace him with the greatest economy – that is, the minimum of moving parts within the current personnel and systems the coaches already have in place.

For this reason, I doubt James O’Connor will come into consideration. Quade Cooper does not need another play-maker alongside him, he needs power and directness.

Reece Hodge is one possibility, but as he is already trying to establish himself at fullback, and the coaches are unlikely to want to disturb that process in its infant stages.

The obvious pick is Hunter Paisami. He has some power and explosiveness, even if he lacks Kerevi’s ballast. He already has international experience, and he may benefit from being required to play a much simpler role outside Quade than the ‘triple threat’ projected outside Lolesio or O’Connor.

How challenging is it to change a mindset, a game tactic and get up mentally to face a team? The question arises from the complete turnaround in intensity, tactics and you could argue attitude that the Boks displayed in the last test.
– Biltong.
With Super Rugby at around 20 potential games plus ten internationals so far, then the spring tour to come, this is a lot of stress on a given body. How much do coaching staff focus on player welfare and what is, if at all the ceiling for matches a given player can squeeze into at year without the chances of injury accelerating, or performance dropping off?
– The Yabbie.

These two questions speak to the mental and physical welfare of players, especially in situations where they have spent a large amount of time away from home, and quarantined in a foreign country.

The veteran Springbok number 8, Duane Vermeulen, spoke about the impact of that quarantine recently: “If you are not here, you don’t really understand the whole thing that we are going through. It’s not as easy as people think. You are away from home, you are away from your family and you don’t see your kids.”

SARU president Mark Alexander added succinctly, “Another strict bio-bubble [in Europe] is out of the question, it will break the players.”

The current stress of bio-bubbles presses on the mind far more than the body. It may strengthen team unity (there is no other company to be kept, or outside distractions to be found), but the weight of an unrelenting diet of rugby and travelling is not an easy burden to bear.

The South Africans knew that they would at long last, be able to return home after the final match versus New Zealand. They had lost the first game to their auld enemies, a game arguably they should have won. It was and is an ancient rugby rivalry.

A cocktail fuelled by a sense of natural injustice, sheer backs-to-the-wall bloody-mindedness, and last-hurrah pining for home shores is a potent one, and it produced a peak performance from the Springboks. It will not happen in every game, or more than once every half dozen games, but it was good enough to provide one of the two or three most enthralling rugby encounters of 2021.

A big thank-you to one and all!