On the first day of the Marsh Sheffield Shield clash between Queensland and Tasmania, it is the young opener Timothy Ward that will make the highlights reel as he defied Queensland’s prolific pace attack to rack up a giant score of 126 not out.

Ward reached his maiden first-class century late in the third session as he pulled a length ball off Michael Neser’s first delivery with the new ball for a boundary through midwicket.

The 23-year-old received plenty of praise from the commentators with Adam White claiming that the way he played his innings reminded him of dynamic Queensland and Australian opener Matthew Hayden.

“I’ve said a few times today, he’s played shots that remind me of Matthew Hayden and the one to bring up his century was very much that,” White said.

The fact that it is only Ward’s second Sheffield Shield match perhaps labels the comparison as premature. 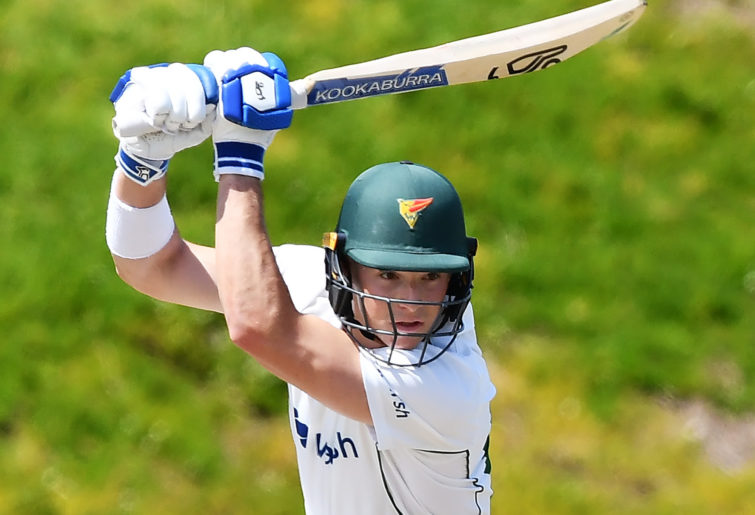 However, the way in which Ward patiently saw out the good balls and looked to attack the bad ones revealed the maturity and mental toughness of the young batter.

“I can’t remember seeing a player in just his second Sheffield Shield game make it look so easy,” White said.

With one century under his belt, Ward has been primed to score many more in his future as his strong century certainly sent out a warning to the other teams in the competition.

Earlier in the match, Tasmania’s number three Charlie Wakim looked strong as he faced 133 balls, scoring 62 runs, but was disappointed not to march on to three figures as he was caught marvellously by Marnus Labuschagne off Mark Steketee’s bowling.

Ben McDermott also contributed heavily with 71 off 158 but fell victim to the commentators’ curse as he hooked a short ball down Matt Renshaw’s throat off Steketee’s bowling.

With the Ashes series confirmed for this summer, the race for a middle-order spot is on. McDermott’s knock will definitely contribute towards his resume.

However, he needs to turn starts into big knocks, like his competitor Travis Head was able to achieve a couple of weeks ago.

The day that belonged to Tim Ward will definitely be of great value to the Tasmanian side as they left the field with seven wickets left in the shed and the Karen Rolton Oval pitch seeming to be showing signs of wear.

However, with Queensland’s star-studded batting order, a draw would not be out of the equation as the likes of Joe Burns, Marnus Labuschagne, Usman Khawaja, and Matt Renshaw have all been Aussie-capped and have the ability to bat for long periods of time.