The Roar
10th October, 2021
2
Join the conversation
Advertisement
Write for The Roar

Tyson Fury has once again outlasted great rival Deontay Wilder in an epic, 11-round fight that we’ll be talking about for years to come.

Whether it’s the final blow that has been called the ‘KO of the year’, or the series of knockdowns leading up to it that saw the bout swing back and forth like a pendulum, the boxing world – and fans all over the globe – simply couldn’t get enough of it.

British presenter and iconic boxing commentator Adam Catterall led the chorus of tributes for the fight, describing it as ‘the best’ he’s ever seen.

I’ve witnessed some fights from ringside in my time but THAT was the best of the lot.

But you didn’t need to be a boxing fan to know exactly how special it was, with NBA legend and another greatest of all time candidate in LeBron James among many to weight in with praise for the Gypsy King, and the quality of the Las Vegas fight.

The Gypsy King Tyson Fury is a great inspiration to anyone going through difficult periods in life. With his mental problems in the past, getting COVID-19 and having an unwell child before the fight, to end up KO Wilder. What a man! #FuryWilder3 pic.twitter.com/FvM84Ubxck

You may not like it, but this body represents peak male athletic performance and there isn't a god damn thing you can do about it. #FuryWilder3 pic.twitter.com/V0gGkDnhUY

All respect to both fighters.. this was generational!

What a fight! @Tyson_Fury is the greatest heavyweight in the world ????????#FuryWilder3

All hail the Gypsy King ???? #FuryWilder3

Hollywood (and combat) royalty also was left in awe, with Dwayne ‘The Rock’ Johnson tweeting that the fight was ‘one of the greatest… I’ve ever seen.’

That was one of the greatest fights I’ve ever seen.
#1
#2
And #1 is undefeated going in.
Congrats to my friend & champion @Tyson_Fury
What a beautiful & resilient performance.
What a “on the shield” heart @BronzeBomber has.
I was inspired tonight by both men???? #FuryWilder3

Wilder’s stirring effort to stay on his feet despite a barrage of hits from Fury in the later rounds also didn’t go unnoticed.

What we just saw from Deontay Wilder is one of the gutsiest displays in a boxing ring in history, bar none. The man was battered around the ring by Tyson Fury and never stopped throwing. He meant it when he said he wanted to go out on his shield. #FuryWilder3

Antony Joshua after he saw Fury get up from two Wilder right hands ????????#FuryWilder3 pic.twitter.com/g58IUi7ylY

Deontay Wilder worked four jobs to support his daughter who was unwell and to give her better care.

He began boxing to gain money for his daughter, and he was still working his regular jobs.

He is the American dream.
He is an absolute legend.

But Fury’s biggest fan was undoubtedly – and would we have it any other way? – himself.

"Am I the greatest heavyweight of my era? Without a doubt. Number one!" – @Tyson_Fury ????#FuryWilder3 pic.twitter.com/aEPrdFgMYi

Jubilant George Kambosos Jr is challenging Australia’s other title aspirants to follow their dreams overseas as he savours his place in boxing immortality as an undisputed world champion. Kambosos is the first Australian boxer in history to win three world-title belts in one fight after scoring a stunning upset win over previously unbeaten American Teofimo […]

Despite claiming he’s ‘not a sore loser’, Teofimo Lopez was soundly booed after appearing to become just that with claims he ‘won the fight’ after losing to Australian George Kambosos Jr 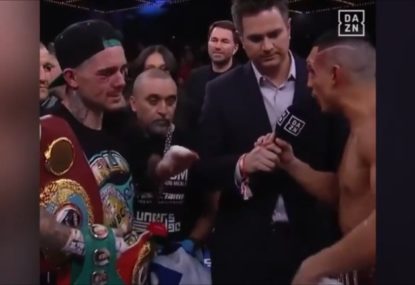