It’s been 36 years since the draft of 1985 brought arguably some the greatest basketball talent ever seen in the history of the NBA.

Now that we know more of each of the players taken in this draft the question is: who will make the top five of the 1985 redraft?

Pick 1: Karl Malone, New York Knicks (Originally Patrick Ewing)
Malone, nicknamed ‘The Mailman’ is considered by the wider basketball community as one of the greatest power forwards of all time. Over the course of his career, he averaged a double-double, was a two-time season MVP, a 14-time All-Star, and featuring in the All-NBA first team eleven times.

In almost any other year, Ewing would have remained as the number one pick, but was unlucky to have been drafted in the same year as Malone. Malone had a long career spanning nineteen years at the Jazz and the Lakers, and his longevity gives him a slight advantage over Ewing. 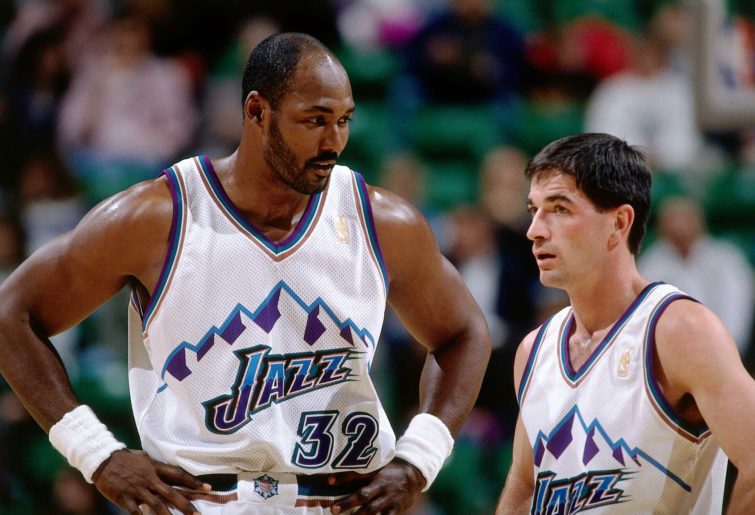 Karl Malone #32 and John Stockton #12 of the Utah Jazz talk strategy during a break in NBA game action at the Delta Center circa 1997 in Salt Lake City, Utah. (Photo by Sam Forencich/NBAE via Getty Images)

Pick 2: Patrick Ewing, Indiana Pacers (Originally Wayman Tisdale)
Ewing was a genuine star over a career spanning seventeen years between the Knicks, SuperSonics, and the Magic. He’s greatly remembered as a strong, athletic centre, almost finishing his career with a double-double average across his career.

In any other year, he would have remained at number one, but Malone just squeezes ahead of Ewing. Ewing is an eleven time All-Star, featured in the All-NBA first team once, and was the NBA Rookie of the Year in his first year. Ewing has been inducted into the Hall of Fame.

Great day back at the Garden for BIG EAST Media Day. Proud of the way Jessie Govan and Jagan Mosely represented Georgetown. pic.twitter.com/AzW0g1up5b

Pick 3: Chris Mullin, Los Angeles Clippers (Originally Benoit Benjamin)
Mullin, a former Golden State and Indiana small forward with the ability to play shooting guard, was a solid scorer over his sixteen-year career. He was inducted into the NBA Hall of Fame and averaged 18.2PPG. He made the All-Star team five times between 1989 and 1993 and topped off his best season in the league making All-NBA First team in 1992 and has had his jersey retired by the Warriors.

He wore the No. 17 in honour of Larry Bird: he certainly did Larry Bird proud in the jersey.

Pick 4: Joe Dumars, Seattle SuperSonics (Originally Xavier McDaniel)
The Pistons guard had a solid career over his fourteen years in the league, contributing averages of 16.1PPG and 4.5APG. He played a huge role in the Pistons winning the championship in 1989 having won the NBA Finals MVP. He was a six-time NBA All-Star and won two NBA championships, finishing his career as one of the greatest Pistons in history.

Pick 5: Detlef Schrempf, Atlanta Hawks (Originally Jon Koncak)
The German big man, born in Leverkusen, enjoyed a sixteen-year career based across the Mavericks, Pacers, SuperSonics, and the Trail Blazers. He was often turned to as the leader of the second unit having won sixth man of the year twice in 1991 and 1992 and featuring in the NBA All-Star game three times mainly in the second half of his career.

He would have been a decent draftee for the Hawks had they taken him three draft spots earlier than he was originally taken.

What do you think, Roarers? Do you agree with the top 5 redraft, or would you have a different order? Stay tuned for the 1986 redraft.